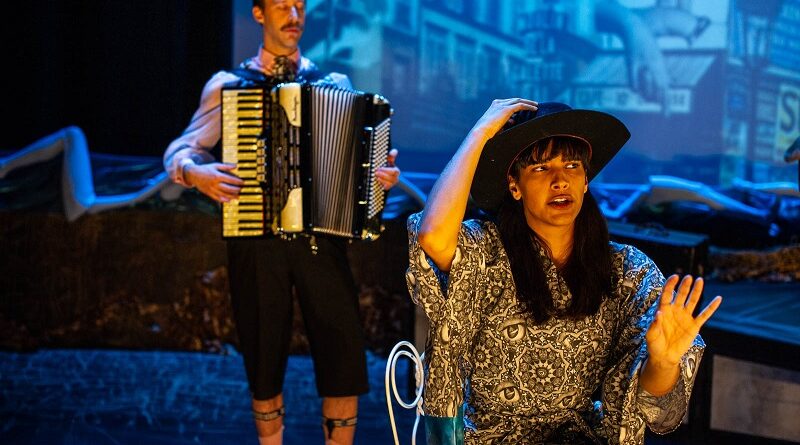 Heartlines closes the Great Canadian Theatre Company’s spring season of 2022 in Ottawa. It is a memory play which foregrounds not only unbridled theatrical representations of gender but also experiments in theatrical form itself as the author and the director draw examples from cabaret, from visions of sets that displace the spectator through the streets of Paris suggesting the 1920s when artistic creativity was booming.

The protagonists are two famous lesbian lovers immersed in the artistic experiments of surrealism. Lucy Schwob was better known as the photographer Claude Cahun who went about in his (her) male attire (played by Margo MacDonald). She accompanies Suzanne Malherbe (Maryse Fernandez) who designed clothes and also participated intensely in the movements of the time. Their visual experiments echoed by this light-infused, multilayered set immediately bring their world to life.

Heartlines begins as we see Suzanne rummaging through an old trunk, pulling out remnants of her artistic and theatrical adventures that have come to an end. Suddenly, the past unfolds as a mysterious blonde woman materializes, swimming across the back of the stage, following a narrow surface of water, defined by a long line of arms, legs and body parts (the remains of the work of Hans Arp). It becomes the liquid equivalent of a form of surrealist poetry (cadavre exquis) where bits of sentences are accumulated on a piece of paper without any thought of creating logical links between them. These tidbits are the leftovers of a dismantled collage that some giddy dada enthusiast might have imagined.

Rapidly the lights change, the timeline shifts, bringing us into the beginning of their pre-war adventure. They are at a school in Nantes, on the west coast of France. The two friends Suzanne and Lucy decide to go to Paris, to take art classes together, perform their desires and freely live out their lives as a couple.

Lucy (Margo MacDonald) is the more theatrical of the two: brave, feisty, anxious to get on with her sexual discovery and take on all the physical and social challenges of this shifting space. She is the perfect cabaret artist, although each one clearly complements the needs of the other, and they turn out to be the perfect performing duo. The expressive lighting effects created by Tristan-Olivier Breiding and a team of excellent visual artists, including Kim Kielhofner and Andrew Galligan, create strong visual impressions throughout the show.

Canadian playwright Sarah Waisvisz then inserts herself into the world of these women by suggesting that the passionate twelfth-century love story of Heloise and Abelard (referred to by André Breton in his surrealist manifesto of 1924 where he quotes bits from the poem), could also be compared to the passion generated between the two French women. The playwright integrates the world of the palm reader, a world of “luminous intensity” referring to the third gender, that undefinable non binary relationship that has emerged to define the special reality of these two friends.

Waisvisz suggests how the surrealist movement, because of its daring social and political theories, produced antipathy among bourgeois audiences, whose presence is also perfectly illustrated by Vanessa Imeson’s period costumes and Andrea Steinwand’s sets. The whole theatre was transported into this jolting new visual world that dominated the event. Women’s place in the history of this artistic movement was not always known, especially if they belonged to one of the identity categories that the growing fascist movement of the time abhorred.

The first part of the show is a series of cabaret sketches where the couple reproduce images inherited from the artists they met in Paris, icons of well-known works of art that come floating around the video screen: the pulpy lips of Dali paintings, the figures of de Chirico, the photographic art of Man Ray and many others, constantly moving across this glowing space reflecting above them.

The playful tone quickly becomes tragic as WWII is declared, and the two friends realize how dangerous it will be for them to stay on mainland France as lesbians, and especially for Lucy as a Jew. They decide to leave Paris for one of the Channel Islands.

At that moment, their parody becomes more subversive. The musical performance by sound designer Scottie Irving was particularly moving as he caressed the piano keys, producing the sad tones that captured the disturbing internal struggle of each of these stage creations. He contributed much to the sensitive work of director Rebecca Benson, whose remarkable choices maintained an emotional distance from the moments of brutality, especially when Claude Cahun is arrested and tortured. This beating, mimed by the actor, removed all sense of reality and thrust us straight into the domain of pure performance. Despite the seriousness of the subject matter, the whole team produced a most sparkling stage work, especially in the second act where movement and mimicry à la Charles Chaplin prevailed. As soon as the occupying German forces arrived, we were confronted with biting humor of the Mel Brooks variety: brilliant satire of the invading forces, the German goose-stepping soldiers, hysterical chanting, mimicry, screeching voices, subversive songs, campy red and black swastikas fluttering in front of the soldiers, possibly a reference to the “freedom convoy” that hit Ottawa recently. These veiled references to the politics of fascism that raised its ugly head in the crowd show how the comic spirit of the play adopted so much of the satire that was inherent in their anger. The timing of this play could not have been better.

The essential theatricality of this strange performance avoided the trap of realism, which might have transformed us into voyeurs. Solid acting techniques backed up by Brechtian theories of epic theatre (that destroy the illusion of reality) brought this to life, not so much in the personal lives of each of the women artists but mainly as a tribute to the process of theatre itself, as a great weapon of subversion that we had the privilege of witnessing during the evening.

*Alvina Ruprecht is professor emerita of Carleton University, Ottawa, Canada and is currently associated with the Department of Theatre at the University of Ottawa. She was a theatre critic for CBC (national radio) for 30 years, founding member of the IATC regional section of Caribbean theatre. She is now retired but contributes criticism to various web sites around the world. She has published books and research articles in England and France and is currently associated with the publication of a series of 30 plays entitled Le Répertoire Caraibes, a project initiated by the late actor/director Jean-Michel Martial in association with the Casa de las Americas (Cuba).