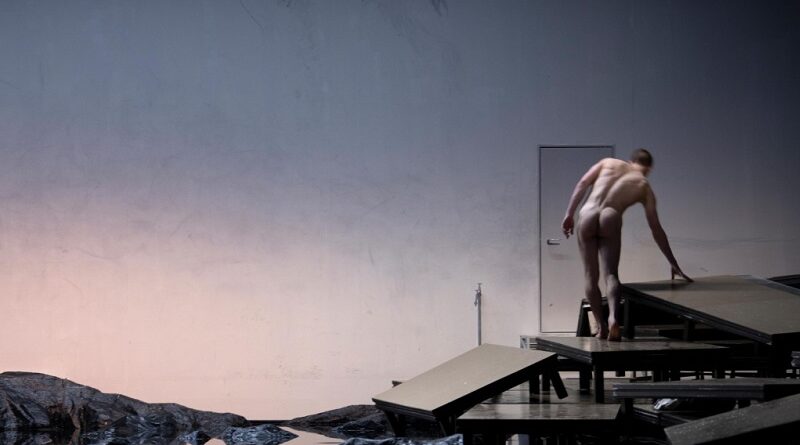 A flickering neon lamp, cold blue light and a door welcome our gaze. Some may recognize traces of Primal matter, a piece Dimitris Papaioannou performed and choreographed in 2012. The first “residents” of this stage-scape are seven lank, shadow-like creatures, with small sphere-shaped heads. Their way of moving is perfectly organized. The heads oscillating on their tiny necks give an animation-like sense; a sense that is reinforced as they move in single file, up and down a ladder, creating the illusion of a motion-picture format frame.

The seven creatures are awkwardly elegant. Although their presence and their movement are powerful, they seem discordant from Papaioannou’s artistic idiom, one directed to the sublime. I feel they function as a distraction. The oscillation between awkwardness and elegance stimulates our curiosity. It creates an effect of estrangement while it invites us to dive into the performance.

The performance is infused with alluring moving images which relax our tensed muscles into the safe universe of the theatre. The cosmos that Papaioannou unfolds on stage is constructed on the principle of transformation, contemplation and daydreaming. The texture of the performance is woven by parenthetical imageries, androgynous creatures, harmonious geometry, ambiguous images, divergent citations, compound events, finesse, beauty, enchantment, successive scenes and tableaux vivant that run through the history of art. I wondered at times if I should investigate the source. Where does the bull we see on stage come from? Would it be Greek mythology, Greek pottery maybe, or its revival, reuse and revaluation in modern iconography, since the beginning of the twentieth century (Picasso, Cocteau, etc.)? Could someone recognize traces of Trisha’s Brown’s Walking on the Wall performance (1971)? Is there a reference to Pina Bausch’s iconic animals and water on stage? Or maybe this echoes Papaioannou’s own previous works? It is of no use to attempt identification. Εach epoch, after all, tends to project its own spiritual and social quests in images, myths, tales, narratives and artistic gestures, and to reinterpret them through contemporary and personal lenses.

Papaioannou does not imitate, nor does he copy. Instead, he creates a new universe while reflecting on and deviating from recourses that reside in memory, where previous experience merges with the imaginary. This amalgamation is offered from the beginning to the end. In his artistic world, we have a sense that scenes are extended and thus provide us with the luxury of time. This prolongation performs and generates an affirmation/cancellation game, as it confirms or abolishes our gaze and attention towards what we suppose is worth seeing and what is not. What is more, he invites us to concentrate on some long stage journeys.  For example, when Breanna O’Mara is slowly sinking amid the sparks of glowing reflections that she makes in real time, pouring water from a tin bucket, while maintaining the impression that she is standing still. The sparkling mirroring paired with her lucent figure creates the transcendent sense of symbolic paintings. Equally, we wander with our gaze and breathe with Tina Papanikolaou, creative-executive producer and assistant director, as she slowly crosses the stage. Her mature body, naked, implies the Venus of Willendorf.

This dilation also simultaneously produces a kinesthetic affect, which disarms our focused attention. While one image is fading into another, one movement transforms into another, one effect (re)generates another; as a result, we are exposed to constant surprise. Our ability to separate the part from the whole is diffused. Instead of staring intently, our sight withdraws to a state of scanning; a synergy of active watching and idle seeing. I found myself wondering whether Papaioannou is attempting to challenge this idleness. He is calling us to stand before the performance the same way we do before a statue of classical antiquity. Both the performance and the statue are meticulously designed. Εach “self-contained” entity is displayed independently of our presence and our projections. And correspondingly, the statue’s nakedness does not involve desire or lust, the naked bodies on stage seem unreachable/unapproachable to libidinous/lustful gaze.

The sensible milieu of the performance, weaved with the tangible, merges with the visible, (as when a dancer’s hand is transformed into a bull’s tongue that is licking its muzzle), the physical with the organic (as when a dancer is “taming” the bull), the hearing with the kinesthetic (as when Vivaldi’s “in due cori” concerto floods the stage). From this sensory web there seem to be missing the most voluptuous and visceral senses: taste and smell.

Papaioannou relocates the licking movement of the bull’s tongue, separating the tender caress from the disturbing odor or the saliva. He abstracts from the miracle of birth the memory of throes and agony. He reenacts the experience of a summer landscape by the sea, smoothing away its sense of humidity.

Sometimes, he chooses to displace symmetry, to crinkle balance, ingraining something funny, like the unpredictable transformation of a sculpture of Venus into a springing fountain, or someone who mops the sea, inoculating it with something violent like the act of castration, or something mucky like the defecation of an animal, or something uncontrolled like running and jumping on a moving mass of Styrofoam. The ephemeral destabilizing dissonance these uncontrolled movements create is meticulously orchestrated to amplify the return to controlled perfection.

While the final scenery of the performance is, in real time, being constructed by the performers, the third Venus of Transverse Orientation rises as the first shining star of a nightfall landscape by an archipelago. A landscape we recognize. A familiar and intimate topography that resides in memory and, hopefully, in the future. We cannot but admire the mastery with which Dimitris Papaioannou materializes the imaginative connection of the “ordinary” experience to the “extraordinary” world of the performance.

After the show, all these images reverberate/re-echo in memory. They rotate as concentric shells around a resilient but persistent vertical axis which is oriented transversely to sublime. A suggestion resounds to (re)locate the beauty in small things, in the detail, in everyday gestures. A reminder reverberates that the world of art, the traces of a myth, or the contingencies of transformation can—and should—be accessible even today. We feel like someone has gently whispered in our ear not to forget to breathe, to daydream, to contemplate. We feel simultaneously a relief and excitement that we can still be allured by the illusions that the renowned artist-prestidigitator brings to town.

*Paraskevi Tektonidou (Athens, Greece) holds a degree in Flute and Musicology and a MA in Drama and Performance Theory. Currently, she is a doctoral student in the Athens School of Fine Arts, specializing in contemporary choreography and dramaturgy in modern Athens. Her research investigates the political in the creative process, the act of performance, spectatorship and perception. She is dance reviewer with various online cultural sites and a newspaper. She also works as a dramaturg. She is since 2018 a member of IATC Greece.