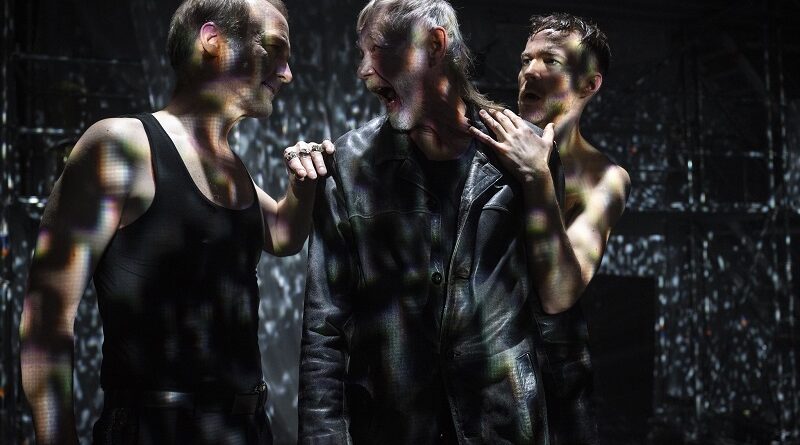 Jussi Kylätasku based his Runar and Kyllikki (1974) on two real-life murders of young women in the 1950s. The murder of Kyllikki Saari was a huge event; the funeral in a small village drew a crowd as big as that for composer Jean Sibelius a few years later.

Jouko Turkka directed the play’s first production in the provinces, and in 1996 he returned to it at the Helsinki City Theatre with Kati Outinen in the role of Kyllikki. Her film work with director Aki Kaurismäki had begun in 1986; her roles include Ofelia in Hamlet Goes Business (1987). For ten years, she was a staff member of KOM Theatre in Helsinki, and now she returns to her first company as the male vicar in Lauri Maijala’s adaptation of Runar and Kyllikki.

Yes, male. Female actors are cast in every male role and vice versa. Men in dresses are not meant to be funny, and this is achieved with impressive calm and determination. However, it strips away much of Kylätasku’s original comedy, and with it goes plenty of subtext, too. Then again, the female roles now carry an unexpected authority; they own the gaze aimed at them.

In the 1950s, the play’s Finnish village was an outwardly respectable community. Its underlying atmosphere reeked of malicious, boastful sexual innuendo. Its philosophy came from three sources: proverbs, ominous dreams and the Bible. Violence was waiting to burst forth in every social encounter. Runar (Ella Mettänen) does not conform to the male model; he is the bastard son of a fallen soldier, an evacuee from the area seized by the Soviet Union. Instead of focusing on social pressure, Maijala’s production concentrates on individuals. His and Mettänen’s Runar is a person with a non-binary sexuality, which he cannot mould into an identity, given the lack of tools the era equips him with.

Kyllikki (Paavo Kinnunen) is kept under severe discipline by her father (Satu Silvo), who, however, fails to perceive how the village men—his buddies—seek every opportunity to sexually assault his daughter. With his joking dialogue, Kylätasku presents violence as embedded in culture. Without its comedy, this production conveys a degree of didactic condescension. Kyllikki seeks escape in God and takes up a job as the vicar’s (Outinen) housemaid; the priest turns out to be the worst sexual predator.

The most rounded character by far is Satu Silvo’s actorly creation. Considering that the production was “ready” just before the pandemic, it is surprising to see so much disparity in the acting. Kati Outinen gives a disappointing performance, all statuesque arm poses and convulsions on the floor; or is it the director who has decided that the vicar is a fake to the core?

When, in final desperation, Runar murders Kyllikki, every man in the village is a suspect. They give false testimony, they resort to lies to hide their wrongdoing and they keep denouncing one another.

Women in male roles water down the constant threat in the play. Their numerous fist-fights are skillfully executed but do not appear dangerous. This may well be intentional. I am tempted to ask whether violence—be it real, looming or imagined—is necessary to create a sense of community and unity. And to boldly continue the thought: if women were to take on all the tasks of men, would we achieve world peace?

Hamlet’s program booklet contains articles by the actors playing Hamlet, Ophelia and Laertes. They compare their character’s sexuality to their own, and declare such outdated characters nearly impossible to put on stage. Not a word from the director (Samuli Reunanen)—and the National Theatre production certainly lacks direction. The few lines where Shakespeare hints at sex are emphasized beyond proportion. All else is spoken to or hidden beneath an accompaniment of relentless music. Olavi Uusivirta as Hamlet is not only a trained actor but a noteworthy pop star, and Fanni Noroila as Ophelia is a budding rap artist as well as a Theatre Academy graduate. Their artistic status outside of theatre was a major reason for casting them, in the hope of attracting young spectators. The “To Be or Not” monologue appears on four occasions, pretty much like an encore in a rock concert, but hey, if that is what the crowd recognizes as Hamlet, why not give them their money’s worth?

One textual addition is Ophelia’s “go f*** yourself” off-stage to Hamlet (the phrase is more colorful in Finnish). Anyway, the audience rewards this with enough applause to interrupt the show. I ask myself, if our politically correct progress has left the 1950s as far behind as our self-flattery leads us to think. Or did I miss a subtle empowerment?

This Hamlet highlights a fundamental problem with contemporary Finnish actors. They engage in plenty of physical activity, but very little of it becomes the property of their characters. Running does not transfer into inner movement (as it did with Jouko Turkka in the 1980s). But luckily, there are blogs and interviews, where artists can seize the opportunity to mention or explain the issues in their productions. In a pre-premiere newspaper interview, Noroila (Ophelia) says she is a non-binary non-heterosexual person. Authenticity is perceived as the virtue which justifies making theatre now, at least in the affluent West, and being authentic is understood as sharing one’s personal identity with the audience and (via social media) with e-onlookers. Not so much sharing the character’s identity, mind you, because a playwright’s creation is less exciting than the actor’s own. Theatre aesthetics follows that of reality television. The Ghost is played by Matti Uusivirta, Hamlet’s real-life father, just as Kyllikki and her father are real-life son and mother.

It is the West which determines the accepted categories of diversity, and at the moment, sexual identity is the liberation front. Smaller cultures such as Finland find it difficult to recognize any other kind. Good plays get peephole interpretations.

*Matti Linnavuori wrote theatre criticism between 1978 and 2013 for various newspapers and weeklies in his native Finland. In 1985, he worked for the BBC World Service in London. Since 1998, he has presented papers at numerous IATC events. In the 2000s, he wrote for Teatra Vestnesis in Latvia. Since 1993, he has written and directed several radio plays for YLE the Finnish Broadcasting Company. His latest stage play, Ta mig till er ledare (Take Me to Your Leader, 2016), ran at Lilla teatern in Helsinki.