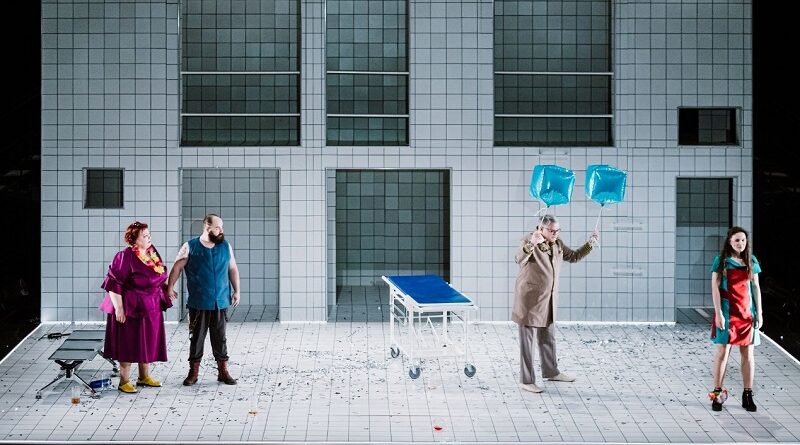 The play Casimir and Caroline (1932) by the Austro-Hungarian playwright Ödön von Horváth (1901–38) takes place during the Octoberfest celebration in Munich after the Great Depression in 1929. It reflects the economic, social and personal challenges in the Weimar Republic at a time of an uncertain future for the country before the establishment of the Nazi regime in 1933. At the epicenter of the plot is a couple, which at the start of the play is falling apart. Casimir has just lost his job, while Caroline is an ambitious young woman who, after an argument, distances herself from Casimir and meets Schürzinger, a young man with better social prospects. Later, Caroline, who dreams of a better future, meets with Schürzinger’s employer, councilor Rauch as well as the district judge, Speer, and gets a taste of bourgeois arrogance that looks down on the poorer classes. At the end, Caroline chooses Schürzinger over Casimir.

The established Romanian director László Bocsárdi staged the play at the National Theatre of Târgu Mureș in Romania. Bocsárdi was born in 1958 in Târgu Mureş and concluded his studies at the Politechnic University in Timişoara in 1984. After finishing his studies in stage directing in 1995, he became the general manager and artistic consultant at the Tamási Áron Theatre in Sfântu Gheorghe. He has directed plays by Sophocles, Shakespeare, Molière, Gombrowicz and Brecht (Cinpoeş 131–51). Ten years ago, he won the UNITER prize for best director for his production of Caligula by Albert Camus in Craiova.

The directing approach constructs a performance of joyful aesthetics, vibrant colors and dominant musicality. The set by Jószef Bartha is a modern tiled space with minimal props that offers two major performance areas: a three-floor building with minimalistic French doors and the area in front of the building. The set functions as a reflection of city life but can also turn into a hospital, as a comment on the pandemic era (Svich 10–17). The lighting by Tamás Bányai reinforces the clinical yet joyful atmosphere. Neon lights frame the doors of the building, colorful rays of purple shine behind dancing characters, bluish and greenish tones overlap with the paler beige tiles. The music by Magor Bocsárdi is also decisive in the creation of the ambivalent, outgoing yet at times ominous atmosphere. Electronic tones and drum beats build up the atmosphere of a dance club and blend the melancholic tones of the characters with a sense of hopeful vitality. Throughout the performance, the choreography and movement (by Noémi Bezsán) elevate the flow of the performers, turning the stage into a space of dance-like motion and juxtaposing movement with more static emotional scenes. The costume design (by Zsuzsanna Kiss) is in tune with the aesthetics of the total concept, with beautiful colors in a palette of blue, red and green. The costumes reflect the emotional state of the characters (darker for Casimir, vibrant for Caroline) and insinuate the differences in the social and class ladder with discreet differentiations.

The performance of the actors in the main roles is harmonized with the actors in secondary roles, producing an ensemble result. The director depicts a society in motion and a couple in disparity. Luchian Pantea as Casimir brings to the role his dominant physicality. He is an imposing man with a shaven head and tattoos, his sleeves cut off and a chain hanging from his trousers. He reflects the anguish of his economic state by turning to music and air-drumming. At times, he reveals his more vulnerable side. Masculinity prevails in his performance, but careful nuances help him stay away from stereotype. Ale Tifrea as Caroline is a woman full of energy and ambition. Magnetically beautiful and athletically slim, she moves on stage with a tension that reflects her desire to steer away from the lower classes and to connect with society. Her dress, green with a wide red stripe in the front, makes her stand out. The performance focuses on the dynamic aspect of the female identity (as does the play) with a sense of liberating feminism and personal pride illuminating Caroline. In times of the #metoo movement, the director constructs a female performance that underlines the possibilities of a woman’s growth in society, deconstructing a patriarchal reality.

In the case of Schürzinger, portrayed by Dan Rădulescu, the director has taken a different approach. His character is more a comic caricature than a fully-fleshed man with complex emotions and hidden trepidations. He wears a colorless trench coat that reflects exactly what he is: an odorless and spineless public servant with no personality whatsoever, living a life of safety and complacency. This choice functions as a political comment for the petite bourgeoisie as well as a performative construction that makes him an uneven pair with Caroline. Rauch and Speer are more decadent drunkards than socially responsible public servants. Wearing clothes that evoke a luxurious life (but do not stray away from the general aesthetics of the other characters), and bearing garlands on their necks, they are representatives of a higher society that wastes time and money.

Bocsárdi directs an extraordinary production, a modernized version of Casimir and Caroline that maintains the core themes of the play and transmits them with powerful aesthetics. The blend of the elements (visual, aural and kinesiological) results in a performance that presents social and personal fluidity in the modern world. The atmosphere of the play is maintained (and even elevated) through the stage choices. The audience witnesses a celebratory stage, full of color and music, where people strive to realize their deeper desires: love, wealth and health. The hospital patients that come out on to the stage wearing see-through overalls with a plastic red heart visible underneath remind us that we live in pandemic-ridden times, when nothing can be taken for granted. While Caroline tries to break away from a life of poverty and misery, the director comments on the deeper importance of life and joy. As long as we are alive, as Bocsárdi suggests (much like Horváth), life can find light in darkness.

Cinpoeş, Nicoleta. “ʽBarbarous Temper,ʼ ʽHideous Violence,ʼ and ʽMountainish Inhumanity’: Stage Encounters with the Merchant of Venice in Romania.” Shakespeare’s Others in the 21st Century European Performance: The Merchant of Venice and Othello, edited by Boika Solokova and Janice Valls-Russell, Bloomsbury, 2021, pp. 131–51.

Goodman, Lizbeth. Contemporary Feminist Theatre: To Each Her Own. Routledge, 2017.

Modreanu, Christina. A History of Romanian Theatre from Communism to Capitalism: Children of a Restless Time. Routledge, 2021.

Svich, Caridad. Toward a Future Theatre: Conversations during a Pandemic. Methuen, 2021.

*Zafiris Nikitas teaches theatre at the Aristotle University of Thessaloniki. He studied Law and Theatre and holds a PhD in Theatre Studies. He has taken part in conferences (at the Freie Universität Berlin, Sapienza Università di Roma etc.) and published articles in international peer-reviewed journals. As a theatre director he has collaborated with the National Theatre of Greece, the Münchner Kammerspiele, the Thomas Bernhard Institute, etc. His monograph Representing the Nation is under publication, and he has published three books of fiction.