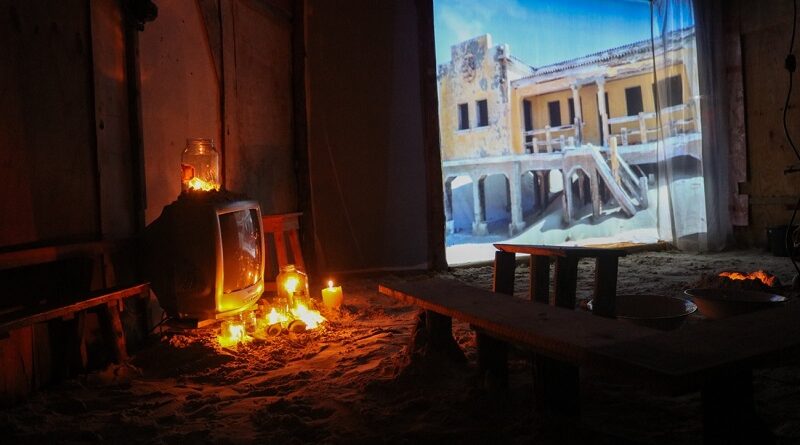 Diego Araúja is a Brazilian artist; he holds a degree in Performing Arts from the Federal University of Bahia (UFBA). His media of expression are literary, visual, scenic, performing and audiovisual; his work spans the roles of director, set designer, visual artist, playwright and screenwriter. In 2017, Diego Araúja and artist Laís Machado founded ÀRÀKÁ Platform, a space of creation and connection among Afro-Atlantic artists.

More recently, Diego Araúja has undertaken a wide variety of creative projects. For example, he conceptualized a choreographic performance for the video installation A Marvelous Entanglement by Isaac Julien, and he was awarded an artist in residency at the Atlantic Center for The Arts (USA) and SAVVY Contemporary (GER). He also represented Brazil in the 56th Theatretreffen (GER) and participated in the Iberoamerikanisches Theatrefestival (GER) with his work QUASEILHAS.

In 2021, he started mapping performers in the Atlantic world through the FRESTAS Triennale. He has also created an ephemeral architecture, entitled Lands Giving Birth Gold, which connects Brazil and Ghana through their respective working songs, for the exhibition EFIE—The Museum as Home (Kunst aus Ghana).

Drawing on his own ethnolinguistic identity, Diego Araúja has been supervising the Creole Time project since 2015, inspired by American and African Creole languages, including a forgotten Creole language spoken within his own family (which they term the switch-tongue), as part of a continuous attempt to “create a language that is not born of trauma.” The works which emerge from this poetic and transdisciplinary process are termed creollage by the artist. In 2022, Diego Araúja will exhibit a sound installation in the Ghana pavilion of the 59th Venice Biennale as part of the process of creating SALTCONGRESS.

What is the role of theatre in your education as an artist?

My decision to become an artist came before I decided what to do as an artist. Despite this, I remember being clearly aware of my disposition toward narrative, not only as a listener, a reader or a member of an audience, but also as a practitioner of narration. It is not simply a saying, a rhetorical expression, nor even a lie, when someone says that stories are beyond the narrative, the book or the storytelling performance, that they are found in the sonorities, the melodies, in a spatial image, in movement, in those possibilities of the abstract. That is why I have been searching for the narrative through means such as music school, plastic arts atelier, nautical metallurgy, carpentry and bakery, creative writing classes and filmmaking. I was searching for the answer to the question of what my own narrative could be.

I used to have and still have the bad habit of wishing to do things that amaze me. It is a desire to understand expression in its complexities, even if in the end I don’t understand anything; it was also like that with writing criticism.

I like to think that this attitude favored my narrative style, which is better than thinking I was a traitor to some sort of art. But the will to concentrate on this style of learning started to grow latent as the years went by. This process led to the conclusion that, in my education as an artist, theatre was the solution. In the midst of my personal turmoil, the theatre provided me with method, and perhaps the ethic of a designer or a projectionist. It even gave me some level of creative altruism. But it also gave me the only acceptable answer to what narrative was for me. It could only be a matter of time.

Among your works, which do you consider to be the most important in your trajectory? Do you identify connections and/or ruptures between them?

For me, my most important work is QUASEILHAS (ALMOSTISLANDS). Of course, it made me move beyond Salvador, not necessarily with the work—since it was always very difficult to travel with QUASEILHAS—but because it favored contacts with other Brazilian and international artists. It is good not to feel like an island. After seven years as a scenic artist, and already wishing to develop other possibilities through art, I found QUASEILHAS to be my message in a bottle. This is partly due to the initiative of the Plataforma ÀRÁKÁ, an artistic space founded by the artist Laís Machado and myself, and motivated by an idea which is, let’s say, more cosmopolitan artistically with the creation of transdisciplinary or expanded works of art. I consider this work important because it was the realization, with all the risks, of a poetic process of almost four years, which at the time I had been calling Aesthetics for a Non-Time. Today, I call it Creole Time (Tempo Crioulo), and I consider QUASEILHAS as my first creollage.

As I came from group theatre—and the dynamics of group theatre is configured as a multifaceted, collective poetics—I ended up considering this work more as a rupture than a connection with my other works. I had the distinctive feeling that I was starting all over again. I obviously had collaborators, as with any other scenic process. I am very grateful to many people, mainly Laís Machado, Diego Alcantara and Nefertiti Altan, artists close to my heart who accompanied me for more than nine months, from the theatrical laboratory to the last appearance of QUASEILHAS. Through this work, I was able to initiate publicly a poetic-authorial project, in spite of great difficulties in maintaining the continuity of this process of Creole Time.

How did the creation of QUASEILHAS come about? Can you talk a little about the relationship between the conception of the scenic space, the music and the work of the alárìnjó?

The work was the result of this poetic research that I currently call Creole Time, born from the following aphorism: What is time if not a consciousness of the flesh? I started to see time as an experience or phenomenological-historical manifestation, and no longer as lines—linear, non-linear, circular, etc. That is, I began to consider material conditions. This view distanced me from my old beliefs, based on metaphysical time, ancestral time or mystical time. Considering this vision, for me, time produces (and it is always a matter of production) modes of consciousness.

QUASEILHAS was the first creollage with that intention, and the scenic, spectacular media, in my opinion, is the most appropriate media for this notion of time. That is why I inserted this work in an ephemeral architecture and encouraged each one of the alárìnjó to organize their dramaturgy of actions, based on their family and geographical memories, in a way that was even Stanislavskian. I kept improving the creole quality of the oríkì I have written about my family and the Peninsula of Itapagipe. In these dramaturgies of actions, the alarìnjó themselves created what I called the melodic vibrations of the oríkì.

Since my starting point was my own family experience, I used Yorùbá as the language of the work. This West African language was the basis of a domestic and already forgotten creole language in my maternal family, a switch-tongue, according to my grandmother. I think that my interest in creole culture starts from there.

How have you observed the contemporary landscape of the black theatres in Brazil? And how do you position your work in this context?

I cannot quite accept the term black theatre, even if it is in the plural. Since we are using the plural, why can’t we accept that diversity in production and aesthetics has increased in Brazil with the work and appearance of black people? Or rather, why can’t we ask how diversity has become richer, if it has brought forward other perspectives of the world and other worlds, if it has challenged many other perspectives which are still so very hegemonic?

The term black theatre sounds to me like a kind of genre in art, and if you stop to think about it, it can introduce a lot of oversimplifications about what a black artist does. I have my doubts as to whether an artistic genre can handle this kind of restriction. Genres, of course, already limit the process of creation. I don’t think that limiting the creative space of black artists even further promotes any kind of equity. The flow of art across time has already demonstrated its fragility. Once you fit a creative work into a typology of creation, the easier it gets to hollow out the meaning.

The plural, black theatres, on the other hand, seems to suggest a movement whose existence is not certain. In all honesty, I hope it is not. I say this because such a movement in art generates a kind of aesthetic inflexibility in its makers, a kind of surveillance that makes it possible to shape a genre according to what is desired, for example, black theatre, but I think that this has already happened.

There seems to be an overly simplified idea of what a black artist’s work could be. We should consider, in the field of art, what that implies. So, regarding the question I raised above, how do I observe the work of a black artist? I note that theatre created in Brazil has become more complex with these artists, that other poetics are being added to the historiography, that there is tension which can instigate other poetic productions. And where do I position myself? I don’t know if I necessarily position myself at all; that will depend on the frame of reference. Today, I am walking; today, I make and think about creollages; tomorrow, hopefully, it will be something else.

Your most recent works are situated in expanded fields of the performing arts, the digital medium and the audiovisual. What moves you to experiment in this domain?

I guess I’m really drawn to the learning process and the strange desire to not know what to do in the middle of the process, to exercise the right both to make mistakes and to find it strange if I master some specialty, to be at risk, not for a bullet, but for an experience that will make me even more alive, to create the Creole Times, to find, perhaps, new answers to my guiding question, What could this narrative of mine be? to create a new language, one that is not traumatic, to overcome trauma through poetics. I don’t think I will be doing expanded art, creollages, all my life; no, I don’t think so. To undertake this kind of work requires a lot of energy. It depends on many contextual factors needed to recreate the same conditions that were in place during the first creative efforts: me in front of a blank sheet of paper, and that’s it.

*Daniele Avila Small (Rio de Janeiro, 1976) is a Brazilian theatre artist, critic and curator. She holds a PhD in Scenic Arts from UNIRIO. She is the creator and editor of the online theatre journal Questão de Crítica, president of the Brazilian affiliate of the International Association of Theatre Critics (AICT-IATC) and a collaborator on the international website The Theatre Times.

**Lorenna Rocha (Recife, 1996) is a Brazilian cinema and theatre critic, historian, researcher and film programmer. She is editor of the multimedia journal Quarta Parede, co-founder of the platform of black Brazilian cinema INDETERMINAÇÕES and a member of the International Association of Theatre Critics (AICT-IATC). She also lectures on black Brazilian theatre and cinema.