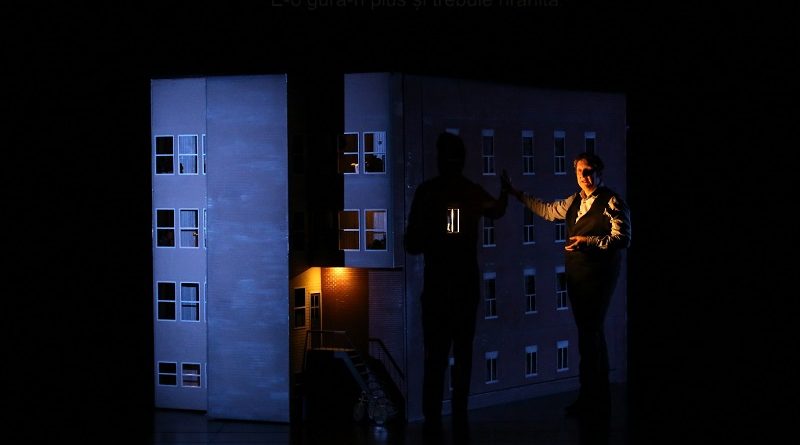 The 13th edition of International Shakespeare Festival Craiova took place at last, having been cancelled in 2020 due to the pandemic. Romania having lifted all the requirements for quarantine, the only obstacle for me to go was that the Korean government would not allow me to take return flights without a negative result of either a PCR or Rapid Antigen test. After a long struggle, I decided to attend this resurrected festival, believing it was worth braving the risk of forced exile in Eastern Europe. It was a little bit embarrassing to wear a mask almost alone in the packed theatre for almost ten days, but I did my best to be faithful to my family’s plea to do so. My first trip abroad in three years culminated safely with my return to Seoul as scheduled.

This edition was strikingly different from previous ones in one particular aspect: the great majority of the shows were parodies of Shakespeare’s plays rather than authentic re/interpretations, to meet our zeitgeist.

Silviu Purcărete directed Ionesco’s Macbett for the Hungarian National Theatre in Cluj, in which Lady Duncan becomes Lady Macbeth, and Macbeth, Banquo and Duncan are not differentiated at all from one another in their pursuit of totalitarian power. Purcărete completes his parody with a strongly relevant image in the closing scene: a new dictator, or actor-dictator, delivers the same old empty gibberish in favor of dictatorial power, during which the stage crew appear and begin striking the set. Finally, images of modern day dictators from around the world are projected on the screen at the stage’s rear center, starting with Donald Trump, Vladimir Putin, Xi Jinping, Kim Jong-Un, culminating with Mickey Mouse.

Hamlet, performed by the Tiger Lillies (of Denmark), was a punk cabaret show, and Ophelia by Japanese theatre company Karas was ballet theatre in both classical and modern choreography. Lithuanian OK Theatre’s Othello, directed by Oskaras Korsunovas, appears to follow Shakespeare’s narrative line, but its young actors deviate from his structure of character and text quite often, getting forced laughs from the audience with stand-up comedy-like gags and exaggerated acrobatic movements. The show makes no differentiation in the age of its characters and denies the logic of the plot. It also employs gender-blind casting, giving a black actress the role of Othello, but this most radical deviation does not give any significant relevance to the jealousy intrinsic to human nature. Maria Shevtsova has defined the production as Othello without Othello, and I agree. In this sense, the show can also be taken as a parody, if an inactive one.

What was most striking to me in this edition was Robert Lepage’s participation in the festival with his most autobiographical monodrama, 887 (2016), which has nothing to do with Shakespeare. It can be taken as an audacious attempt by the festival to expand the horizon of its editorial philosophy, or as an expedient compromise to adapt to the difficult years of the pandemic that severely reduced the number of live Shakespearean productions.

On my way to Craiova from Bucharest, I accompanied Lepage and his troupe, and during the journey he told me about the performance of 887 in Germany in the previous month, where he performed in English. To my surprise, he said it was quite different from when he performed in French. It was as if he was saying that he prefers to play in English, because English is more laconic and straightforward, while French is more rhetorical and decorative. He seemed to believe that language characterizes acting. How true it is!  To my relief he added that he would play in English in Craiova. On the following night, I found him playing mostly in English, but there were scenes, numerous and long, in which he played in French, with surtitles being offered only in Romanian. It was quite frustrating to me, but fortunately, Michel Vaïs, my walking French dictionary, was sitting beside me, and later explained about those scenes in French, and a lot more about the history of Quebec and the Quebecois, and most importantly about the poem “Speak White” that Lepage recalls in the show.

Once again, Lepage shows his ingenious orchestration of multiple scenery. In the center of the stage is a large modular cube which changes nimbly as if dancing to music in a magic show, pouring out so many places: an apartment, a bedroom, a kitchen, even a library. Looking down on the miniature replica of the four-story apartment building in which he grew up, he introduces his family members and seven other households doing their daily chores, like in a multi-video art show. When his father, a taxi driver, returns home exhausted, a model minicar replaces his taxi. Lepage reflects on his childhood: he misses his family and the neighbors, all working hard to survive.

In this his sixth monodrama, Lepage recalls his memories of 887, Murray Avenue, Quebec City, where he grew up, particularly that of his father who represents the protest of the working-class Quebecois against the colonialism of the English-Canadian government. In this heavily autobiographical play, Lepage masterfully relates personal history to social history. Compared to his previous plays that put personal history in the global context, 887 seems to confine its relevance to domestic history, and that to Quebec and the Quebecois. However, its subject matter, like colonialism, class conflict, separatism, discrimination of the haves against the have-nots, can be rendered global, or at least international, in our times.

If his memory of his father is the emotional and personal core of the play, the poem that Lepage recites at the end of show, “Speak White”, is its social and logical core. Written by Michèle Lalonde in 1968 (according to Michel Vaïs’ memory, however, it was written in 1966), the title is an oxymoron that calls for protest, even revolution, for the freedom of Quebec. “Speak White” was what the blacks in the cottonfields of the USA were told when their white masters wanted to understand their traditional language. By extension, some intellectuals of the 1960s said the Quebecois were the “White Negroes of America.” So, in Ms Lalonde’s poem, white means the language of the ruling English power, who were lucky to have “real poets” like Shakespeare, Byron, Milton, Shelley and Keats. Lepage is invited to recite the poem at the 40th anniversary of the Night of Poetry. And he finds it very hard to memorize it, although he is very used to learning dramatic lines by heart. This difficulty, and the consequent delay of memorization, is Lepage’s brilliant trick to rediscover and reinforce the meaning of the poetry.

While trying to memorize the poem, Lepage recalls his memory of two opposite leaders who visited Canada in the 1960s: Queen Elizabeth, the symbol of British colonialism, and French President Charles de Gaulle, who said in his speech in Montreal “Vive le Québec libre !” The show ends with Lepage reciting the poem at the 40th anniversary of the Night of Poetry. It was so touching that I don’t remember well if I have ever experienced this kind of immediacy in the past decade. Lepage was Stanislavsky here, with no distance between himself now and his past. His anger, his passion, his provocation were all too honest.

It is an irony that this non-Shakespearean show should be the highlight of the 13th Craiova International Shakespeare Festival. But it is also true that Lepage contributed to keeping up the high standard of the festival with his 887.

*Yun-Cheol Kim obtained Ph.D from BYU with his dissertation on contemporary American Drama. He served as President of IATC from 2008 till 2014. During his presidency he launched IATC’s webjournal Critical Stages in 2009. He served as artistic director of the National Theatre Company of Korea from 2014 till 2017. He retired from School of Drama, Korean National University of the Arts in 2015, where he taught for twenty years. Two-time winner of the Critic of the Year Award, he has recently published his thirteenth book, Promenade into Contemporary European Theatre in the 21st century.