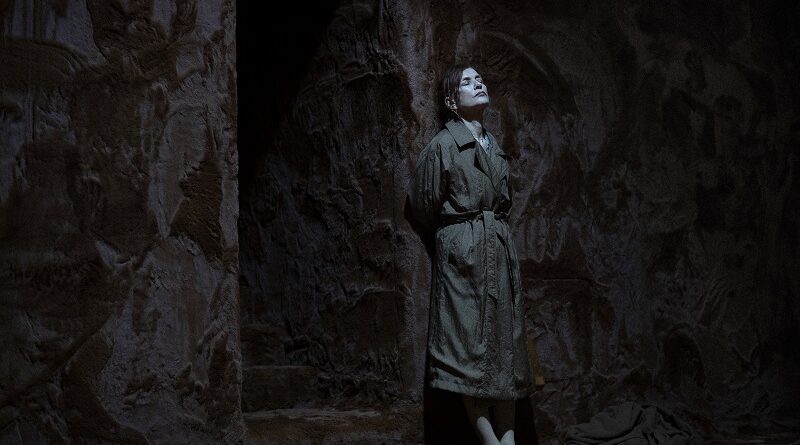 Εxcitement was evident in the faces of all those who watched Ivo van Hove’s instantly sold-out production of Tennessee Williams’ The Glass Menagerie [2] (and Isabelle Huppert, of course…) in Athens’ Onassis Stegi.[3] And rightly so, since the performance managed not only to convey the fragile world of the American writer, but also to craft it in a new style of sensitivity, a new look and new aesthetic, as an original and modern inhabitant of that good old, post-war district of world theatre.

Tennessee Williams is by no means a foreign writer for Greeks—the ‘melody of his lost dreams’ has long since conquered our stage. However, there seems to be something more to it. Although the staging of many other foreign writers has been equally successful, Williams’ plays have always offered a kind of osmosis between the deeper reception of his work and the aura of an entire world, as far away from his own as Greek post-war society. And in doing so, his own distant half-lit America of the 1950s came to converse in advance with the indigenous contemporary Greek drama.

In any case it is difficult for anyone to remain a cold observer of a story that makes them feel moved mainly by revealing its own insignificance. To be honest, nothing in the story of the Glass Menagerie and its failed matchmaking between the wannabe-winner Jim and the already-loser Laura, in the petit-bourgeois apartment in New Orleans, is what we call ‘big’: it is not a big story with an end, a precept or a moral. No one is too unhappy, too failed, or too special. No one is too poor, too desperate, or too ‘crippled’. What’s more, none of these people foreshadows something brilliant, big, or dazzling about their future. The Glass Menagerie is an insignificant story in the twilight glow of great drama and the even greater lightning of the world.

But there doesn’t seem to be much light here, anyway; van Hove has put the persons of his own Glass Menagerie to live in an essentially buried house under the earth, a nest of small,  frightened animals hiding from outside predators. Is it Tom’s world, which weighs him down like a prison and forces him to go out to take a breath? Is it perhaps the world of Amanda, who has been buried there with only her memories of the good old days? Or is it the world of Laura, who feels it as a refuge where she can curl up inside and stay content with the dim light, glimmering on her own effigies of the upper world–—all the more fragile than herself? However, the image of the Father is stamped everywhere on the walls, that great absentee who once built the nest only to abandon it soon afterwards. Everything in this cave shows that the only way out is upward flight.

This world of Williams and van Hove may belong to everyone, even if everyone sees it differently. This is for sure not pure realism; I do not even know if it can be labeled as the famous ‘poetic realism’ with which we have closely associated the playwright of the Glass Menagerie for so many years. After all, Jan Versweyveld’ s set lacks one of the common tools of the typical realistic scene as we know it; namely, the family living room. Without it, the roles of the play are strangely exposed and unprotected on stage, and the actors that impersonate them turn some of the typical movements of the lower-class Americans of the era into universal statements, “Gestuses” of an extra-realistic contact with the audience.

Nevertheless, who can deny that this world still remains a world made of the materials of dream; it is still a poetic, that is, a re-established world, revealing its true light only when breaking glasses—and much of its melancholy comes from the tender music of George Dhauw. Tom himself is the persona of the poet carrying his future guilts as a present confession. Nahuel Pérez Biscayart truly embodies this fluid and weary poet, Tom. Justine Bachelet ‘s Laura is a revelation in itself: the ‘disability’ of the character seems to nestle in Laura’ s mind like a kind of hysteria, as the actress personifies before our eyes a girl so thirsty for love, so full of desires and inhibitions.

Isabelle Huppert beautifully projects Amanda as the mother figure who stars in the playwright’s mind: her hyperactivity compensates for the dullness of her environment, and her maternal fortitude reveals her effect on Williams’ future remorse. Finally, Jim (Cyril Guei) is filled with the typical American positive frame of mind—perhaps the only one who seems to belong (hopefully or not) to the “upper world”. It is obvious that Jim’s short visit to Tom’s apartment will only bring turmoil without peace—after all, his own world, unlike Laura’s, is illuminated by lightning.

We’ve been spoiled by Williams for a long time … and most of us, I imagine, carry in our memories more than one performance of his fragile Menagerie, made of glass and blue roses, as well as suppressed desires. However, the performance in the Onassis Stegi reminds us that even today, in a drama like Williams’, a play made of and for small things, we can find refuge in tenderness and humanity. From the beautiful work of the director and his great actors in Athens, what finally emerged as a final triumph is Williams’ own precious play.

[1] More information about the contributors to the production and the members of the cast can be found at the webpage of the Onassis Stegi.

[2] Ivo van Hove has been director of Toneelgroep Amsterdam since 2001. Ivo van Hove (b. 1958, Belgium) began his career as a theatre director in 1981 with his own productions (Germs, Rumours). From 1990 to 2000, he was director of Het Zuidelijk Toneel. From 1998 to 2004, he managed the Holland Festival, annually presenting his selection of international theatre, music, opera, and dance. Until 2010 he was one of the artistic leaders of the Dramatic Arts department in Antwerp. Theatre productions by Ivo van Hove have been performed all over the world from NY to Moscow, Paris, Buenos Aires, and Sydney. Recent international productions are A View from the Bridge at Young Vic/West End/Broadway and The Crucible on Broadway, Lazarus in NY and London, The Damned (Visconti) at La Comédie Française, Vu du pont at Théatre de l’Odéon, Hedda Gabler and Network at National Theatre, London (Infos according to Onassis Stegi’ s program).

[3] Ivo van Hove first collaborated with the Onassis Stegi in 2011 with the Scenes from a Marriage by Ingmar Bergman.

*Grigorios Ioannidis works as Associate Professor in the Theatre Studies Department, University of Athens, Greece. He is also Coordinator in the “Creative Dramatic Writing”, Postgraduate Program, Hellenic Open University. He has a Diploma in Electrical Engineering (NTUA), BSc in Theatrical Studies (University of Athens), an MA in History and Philosophy of Science and Mathematics (King’s College, London) and in Theatrology (Theatre Department, UOA). His Doctoral Thesis is on the History of Modern Greek Theatre (2005, Theatre Department, UOA). He is a theatre reviewer for the Journalists’ Journal (“Efimerida ton Sintakton”).