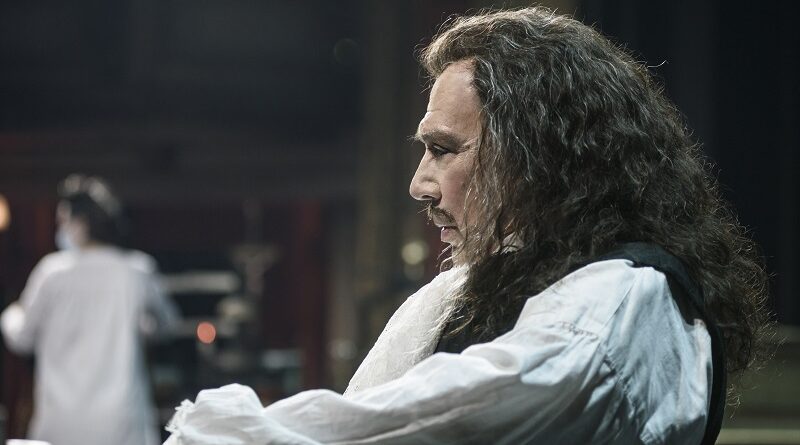 There is a special place reserved in the theatre for people whose life and works, though grounded in more or less verifiable fact, have slid into the realm of myth. Jean Baptiste de Molière (born Poquelin) is one such case. As a liminal mythic figure, and thus as a cultural text of distributed authorship, Molière has been received in ways that betray more about the context in which—and the intentions from which—reception springs than about the primary mythical material itself, here Molière the man. As a scholar of myth reception would put it, Mikhail Bulgakov (1891–1940), the Russian writer (and former medical doctor), received Molière as a myth composed of episodes nodding to the past by means of which he would speak to his own present, early-twentieth century Soviet Russia.

The Cabal of Hypocrites, renamed Molière at the demand of Soviet censorship that strove to blunt every critical edge of the play, is Bulgakov’s take on the great comic dramatist-as-myth. It dramatizes Molière’s fall from the King’s grace and his last days as a persona non grata, after a long persecution mainly by agents of the Church; a fall that hinges on the accusation that he knowingly married his own daughter, Armande Béjart (in actuality, a historical rumor woven into Molière’s biography). The play is not a romantic drama, contrary to what Bulgakov suggested in an interview he gave a few days before the play was cancelled after only seven performances at the end of February 1936. It is not a historical chronicle either. And to his censors’ bitter disappointment, it definitely does not subscribe to the ideological and aesthetic tenets of socialist realism.

It is rather a parable of satirical intent, with expressionist streams running deep through it. Who the targets of the satire are, however, is not clear. This generates a kind of creative ambiguity that may well be the source of the play’s continuing appeal for theatre directors who aspire to project and criticize their own nemeses on the fictional screen of the play’s tyrants, representatives of the State (King Louis XIV and his courtiers) and the Church (the Archbishop of Paris and his acolytes). This is also the reason why regime loyalists among the USSR’s intelligentsia trashed it.

For the latter and for the censors, the target is absolutism and the Soviet regime itself; for others, including some reviewers of the play’s first Greek production in 2005 on the National Theatre’s Experimental Stage, also directed by Stathis Livathinos, it is the above plus the willful depravity plaguing the theatre industry; for other critics, the meanness and ignorance of the masses of prigs and apologists of tyranny; and for others still, the random cruelty of those with the power (all sorts of it) to exercise authority (in every manifestation) over others. If I were to comment on the play as dramatic text, I would praise its fine language, balance of expressive means, generative thematic content, without a second thought. But I should not fail to recognize that what renders the play a feast of interpretation, the obscure objects of its satire, is also what shrouds its “beating heart,” as it were, and makes it difficult to connect with. I do comprehend its immediate relevance, there is no doubt about this; but it interposes some sort of barrier to affective signification that precludes any concrete attachment between the drama and its recipients, us.

Not that this is necessarily the point. Detachment can be highly constructive, even in quasi or purely pedagogical ways, as theatre history has shown. And it seems that Livathinos, who returns to Molière more than fifteen years after its first Greek production, plays into that notion. Yet the foregoing quality of the play, coupled with the multidimensional distance the screen imposes when you watch the performance via online streaming, renders the effort to invest mentally, affectively and viscerally in the performance demanding, to the point of becoming wearing. And this despite Livathinos’ generally dexterous directorial sweep, the cast’s well executed performances, and the masterly stagecraft.

Here, I should note that praise befits Eleni Manilopoulou’s set and costumes, as well as Theodore Abazis’ music, which together compose the sensory beacon and emotive compass of the experience. Special praise is also due to Nikos Kardonis’ performance as Louis XIV and Michalis Valasoglou’s as the Archbishop; the former nuanced to the point of poesy, the latter awe-inspiring. Still, all these assets are not enough to keep the impression that the onstage field of forces produces from waning considerably in the last third of the performance.

To be honest, I am not sure if this “dimming effect” should be attributed to the mediation of the screen, the dramatic text that becomes somewhat rambling near the end, the faltering of rhythm in the mise-en-scène of the final act, or to all three of these factors. Whatever the causal agents, the result is that by the final scene and Molière’s death, besides a sense of ennui that has set in, there is also the awkward realization that the performance has inspired no sympathy whatsoever for any of its major or minor characters, not even for Molière, or, rather, especially not for him.

I certainly cannot say whether Livathinos intended for Stamatis Fasoulis to embody a Molière who is little more than a moody and dissolute diva, a duplicitous and opportunist toady, a man lacking a moral center or discernible gravitas whose behavior borders on dementia. If he did, I was left wondering why. Bulgakov humanized his protagonist: he did not make a caricature of him. His text brings Molière from the heights of genius down to the level of the common human; and it intimates, in subtle but unmistakable ways, that it is precisely this commonness, all that is not great in humanity, that brought him down; hence the work’s tragic import, what makes it a “classic.” In the performance I watched, Molière begins as all too human, but by the end he is brought much lower than that, and rather gratuitously.

I am also left wondering about the identity of the hypocrites the play targets. If it is those in power, does this include those in power in the theatre industry? More specifically, is it those who advocate freedom of expression onstage while involved in offstage cover-ups of cases of workplace bullying, harassment and abuse? January 2021 marked the beginning of a movement against these phenomena in Greece following the publicity given to several such cases in the theatre, music, sports industries and beyond. Court decisions pending, the only safe conclusion would be that this Molière evinces how resonantly its mythic material still speaks to our own present.

[1] More information about the contributors to the production and the members of the cast can be found at the webpage on the National Theatre of Greece, at https://www.n-t.gr/en/events/Moliere.

*Aikaterini Delikonstantinidou holds a PhD in Theatre Studies from the School of English, Aristotle University of Thessaloniki, Greece. She is adjunct professor at the Department of Museum Studies, University of Patras, and post-doctoral fellow at the Department of Theatre Studies, University of Athens, focusing on applications of Digital Theatre in Adult Education. She has been involved with Critical Stages since 2014. Her monograph, titled Latinx Reception of Greek Tragic Myth: Healing (and) Radical Politics was published by Peter Lang in the summer of 2020.