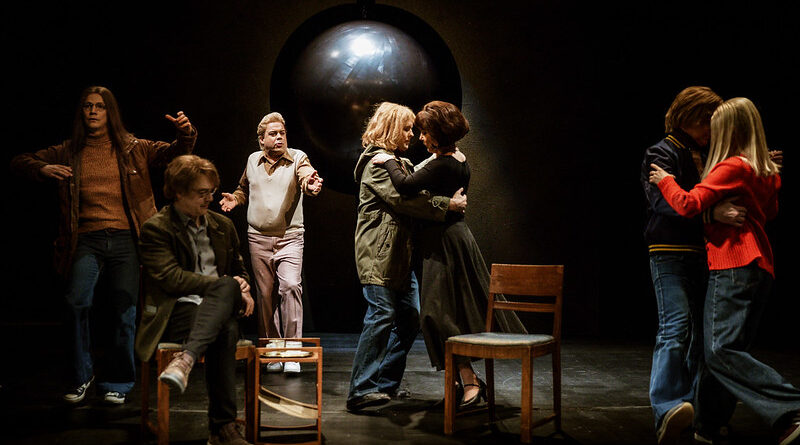 Why did my father Gunnar shoot himself on a park bench in 1971? What had happened to him and to my mother Maria before they became a couple?

Those thoughts are recreated as dialogue in Joakim Groth’s play Vi är bara mänskor (We Are Only Human) at the national Swedish Theatre in Helsinki, Finland. The character asking those questions is called Joakim Groth, and the playwright-director actually stands on the stage for the first few minutes, directing as if it were the play’s first rehearsal, before Mr Groth gives his jacket to the actor Riko Eklundh, who then takes on the role.

In this autobiographical play, there is not much stage action: each protagonist gets to enjoy a dance. Neither are there monologues, in which a character would have an opportunity to justify, defend or understand themself. In Groth’s dramatic universe, people employ dialogue—to misunderstand each other. In the very first scene, Groth sets a further condition on what dialogue can and cannot accomplish: if you want to reach someone, being right is not enough.

Groth’s career began in the same vein. His unforgettable breakthrough came with Waiting for Godot in 1985, which he directed for students of the Theatre Academy; his brother Marcus Groth was an actor in it. It was a production of leisurely desperation. Performed in the open air in Sweden during the Nordic theatre academies’ festival, it left everyone gasping for air and not simply because of the scorching Gothenburg sun.

Joakim Groth (born 1953 in Stockholm, Sweden) works in Swedish, one of the official languages in Finland.

In We Are Only Human, the little brother Marcus is vaguely present, but this is Joakim’s recreation, Joakim’s memory, Joakim’s interpretation. At the time of his father’s suicide, he was eighteen.

Joakim (Riko Eklundh) looms in the background in scenes in which his parents’ lives are acted out. The television version, with the medium’s fondness for close-ups, misses some of this: Joakim is always present, and in a way he is a product of these goings-on, but he cannot interfere, except of course that—even though based on facts—everything we see is a product of his imagination. The adult playwright watches himself as an eight-year old and as a clumsy teenager (Dennis Nylund in both roles), but the director Groth generously grants time-travelling vantage points to other characters, too; we get to see the father’s early girlfriend, Cerle, as young (Sophia Heikkilä) and old (Marika Parkkomäki) side by side. Ages interact, once the characters come to realize that we are only human.

The father as a young man is played by Simon Häger, and the older Gunnar by Niklas Åkerfelt, whereas Nina Hukkinen plays the mother Maria at all ages. This is, of course, contrary to how sex is conventionally represented. Every actor, including the narrator-interviewer Joakim, plays several roles, with the support of clever costume changes.

Grandfather Groth had emigrated from Germany, and Gunnar as a German citizen has to join the German army in 1943; he witnesses the allied mass bombings of Hamburg. Later, he is stationed in northern Finland, where he deserts the Wehrmacht for Sweden. In short, prime material for cancel culture and for colonizing the dead as vehicles to proclaim popular views of today; but wouldn’t that be a monologue and thus very un-Grothian? We Are Only Human is an attempt to understand bygone loved ones as they were, and this means leaving historical irony in the auditorium instead of parading it on the stage.

During the Second World War, the mother, Maria, is a young woman in a coastal town. She becomes romantically involved with a German officer (Patrick Henriksen) before visiting her old friend Cerle, who had started as Gunnar’s secretary and is now his common law partner. Without explanation or visible guilty conscience Gunnar leaves his partner for Maria.

Maria conceals her cancer from the family. She dies two years before Gunnar. But the performance does not end with death. There is a quiet family evening; no one has anything special to do. The same scene took place early on in the production, and its repetition at the very end gives weight to the parents’ joint realization: everyday family life is an adventure, if one perceives it as such. A tragic death does not imply that one’s whole life was a tragedy. Is this resignation, or a profound appreciation of human limits?

There is an unadorned beauty in Groth’s work. If the above failed to convince you of its merit, take a look at some of his earlier productions.

In En teaterkritikers död (Death of a Theatre Critic, 2008), a director has had a bad review. He bursts into the critic’s home and at gunpoint demands a rewrite because the critic “chose to ignore the director’s interpretation of the play.” The critic dies, somewhat accidentally, but the director is sent to prison, where his cellmate murders him in order to become famous. My interpretation is that Groth’s play mourns the arrogance and indifference of humans toward one another, even if and when their intentions are good.

Intermezzo på Johannis (Intermezzo at Johannis Manor, 2002) takes place in 1899, when Russia is intensifying her grip on the empire’s remote corner, namely Finland. The guests and hosts at the manor are Chekhovian and Tolstoyan. At the time, I wrote: just as with Chekhov, a character’s inner life is not a straight line, where concealing one end would render the other end visible, but a winding path of duty, hope of happiness, awareness of one’s position in time.

*Matti Linnavuori wrote theatre criticism between 1978 and 2013 for various newspapers and weeklies in his native Finland. In 1985, he worked for the BBC World Service in London. Since 1998, he has presented papers at numerous IATC events. In the 2000s, he wrote for Teatra Vestnesis in Latvia. Since 1993, he has written and directed several radio plays for YLE the Finnish Broadcasting Company. His latest stage play, Ta mig till er ledare (Take me to your leader, 2016), ran at Lilla teatern in Helsinki.