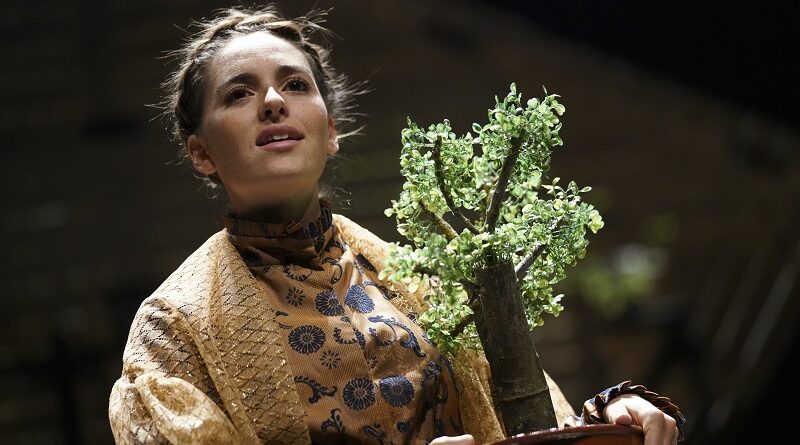 Thus it is no small wonder that Western cultures in the twentieth century were haunted by, if not obsessed with the idea of sacrifice.

TV series like Black Mirror (2011) or Years and Years (2019) have already accustomed us to the idea that what will define our near future (technologically and epistemologically) is already part of our present. Truly, never have science fiction and realism seemed so contiguous to us.

Catarina and the Beauty of Killing Fascists, written and staged by Tiago Rodrigues, is set in 2028. At that time, in the political dystopia invented by the author, an extreme far-right government will have been elected to rule Portugal (which seems now, in 2021, less and less unlikely). The performance’s narrative has as its protagonists a family that has a bizarre tradition: once a year, all its members abandon their normal lives and gather in a family property, in the Alentejo (a region in the south of Portugal), with the purpose of killing a fascist. According to the macabre “mythology” created in the performance, this tradition started with the murder of a National Republican Guard officer, who fatally shot the twenty-six-year-old agricultural worker, Catarina Eufémia, in Baleizão (Alentejo), on 19 May 1954, following altercations during a rural wage strike. (This young antigonesque figure is nowadays a true icon and martyr of Portuguese antifascist struggle). Thus, the murderer of Catarina Eufémia was the first fascist to be killed, executed by his own wife in the presence of their children. Thereafter, and while they are together as a family, all their members will be called “Catarina,” men and women, boys and girls, and everyone will dress like a peasant, men and women, boys and girls (magnificent costumes by José António Tenente).

At the moment each one turns twenty-six years old, each will kill his first fascist. This family of resistants-executioners-vigilantes (António Fonseca, Beatriz Maia, Isabel Abreu, Marco Mendonça, Pedro Gil, Rui M. Silva and Sara Barros Leitão) has, however, a peculiar “specialization” in the fight against fascism: they only execute fascists who have been responsible, voluntarily or involuntarily, for the deaths or harming of women. It is, therefore, in this condition, that a fascist (played by the actor Romeu Costa) is held there as a hostage. In the world of fantastic imagery that the performance calls for, this fascist has been the author of violent, sexist and misogynistic speeches, which have inspired (or may have inspired) several deaths and/or violent acts against women.

As in any good work of science fiction or literature of the fantastic, the rope that measures the distance between the real and the credible is stretched to the maximum of its elastic capacities—without ever being broken. Despite the extravagance of the whole narrative scheme of the performance, the mantle of improbable plausibility, which gives everything a dimension of pessimistic prophecy, remains perennial.

We could allude to the various references of canonic dramatic literature that Tiago Rodrigues places on the performance: the ghostly Hamletian image of Catarina Eufémia calling for revenge; the Chekhovian situation of the family gathered in the countryside; the literal quotations of Brecht’s aphorisms; the metaphor of considering this curious household as a flock of swallows—which to me resembles the same symbolic game between uniqueness and fragility played in Chekhov’s The Seagull or Ibsen’s The Wild Duck. We could. We could also evoke the dialogue that F. Ribeiro’s powerful setting establishes with Brechtian devices (fundamental to understanding the game between truth and artifice during the unforgettable coup-de-théâtre in the final twenty minutes of the performance . . .). But it is the tradition of tragedy that Rodrigues is dealing with.

Catarina . . . by Tiago Rodrigues has the best characteristics of tragedy. It inspires individual sacrifice, it is dialectical and non-didactic, it discusses the best destiny for the collective, and it is insensitive to the luck of its heroes. Furthermore, his fatal journey—the day when one of the youngest “Catarinas” arrives to kill his first fascist—inspires one of the discussions that traverses the entire history of theatre (and tragedy), from antiquity to our own days: what is the role of violence, in art and in the world? And what is the artist’s responsibility in representing violence? Thus, in discussing whether or not to kill the fascist, whether violence should be perpetuated or not, whether there is justice in violence or not, metonymically, the role and responsibility of the theatre in all of this is also discussed. In this respect, the agon between Catarina-Mother (Isabel Abreu) ​​and Catarina-Daughter (Sara Barros Leitão) is simply memorable.

More importantly, I believe, Tiago Rodrigues’ tragedy recalls the importance of ritual in the establishment and maintenance of human communities. Indeed, tragedy and ritual are, at least since Nietzsche, inseparable. The reparative power of tragedy derives from its umbilical relationship with rite and sacrifice.

In Theatre, Sacrifice, Ritual: Exploring Forms of Political Theatre (2005), a study dedicated to the topic of sacrifice in the theory and theatre of the twentieth century, Erika Fisher-Lichte reflects on the “role and meaning accorded to the topos of sacrifice in twentieth-century Western cultures as mirrored in theatrical performances which fuse theatre and ritual in order to deal with the problem of community building in societies characterized by loss of solidarity and disintegration,” having at its core “the provocative connection between the utopian visions of community which such performances devised and tried to realize and the idea of sacrifice” (viii). It is precisely in this lineage that Rodrigues’ performance can be set (and it would make a great afterword for Fischer-Lichte’s book . . .).

What Catarina . . . comes to recall, acutely, is precisely that modern societies have alienated rite and ritual. We no longer ritualize our experience. We have replaced it with other forms of encounter. The cathartic potency that tragedy discovered in the hero’s ritual sacrifice has been replaced by other forms of representation of the world. Forms that represent comfort, security, order, progress. All values ​​that are now bankrupt, as it seems.

This timid reflection leads me to René Girard who, in La Violence et le sacré (1972), associates the excitement of tragedy with the excitement of the sacrifice necessary to establish communities. For Girard, the sacrificial rite had a function of maintaining social harmony. Ritualized sacrifices serve as a preventative for spontaneous sacrifices and for uncontrollable outbreaks of violence, serving as liberation from the endemic tensions of a community. However, when these rites fail, a state of sacrificial crisis sets in. And that is precisely where we are: in a state of sacrificial crisis.

What Tiago Rodrigues’ performance comes to recall is, therefore, the seething need for finding escape mechanisms for social tensions. The solution that this macabre family has found is a return to the sacrificial rite. But, assuming that the ritual proposed there is a criminal and doubtful solution, what other forms will there be? What other ways can we still use to maintain social harmony? For the restoration of equality and democracy? Can violence produce harmony? Can violence produce justice? These are questions that the history of the last hundred and twenty years has answered in very different ways. These are unanswered questions, neither clear nor easy. The courage of the performance is also to approach all these issues through dialectics, with a willingness to discuss and to think. Basically, the question that remains when we leave the theatre venue is: to prevent the black future prophesied here from happening, spectator, how far will you be willing to go? How far, spectator?

*Rui Pina Coelho (Évora, b. 1975) is an Assistant Professor at the School of Arts and Humanities of the University of Lisbon, Director of the Centre for Theatre Studies (FLUL) and Director of Sinais de Cena: Performing Arts and Theatre Studies Journal. He has coordinated the volume Contemporary Portuguese Theatre: Experimentalism, Politics and Utopia [working title] (TNDMII / Bicho do Mato, 2017). He coordinates the Theatre Writing Laboratory of the D. Maria II National Theatre (2015–19). Since 2010, he has been collaborating regularly with TEP—Teatro Experimental do Porto—as a playwright and dramaturg.