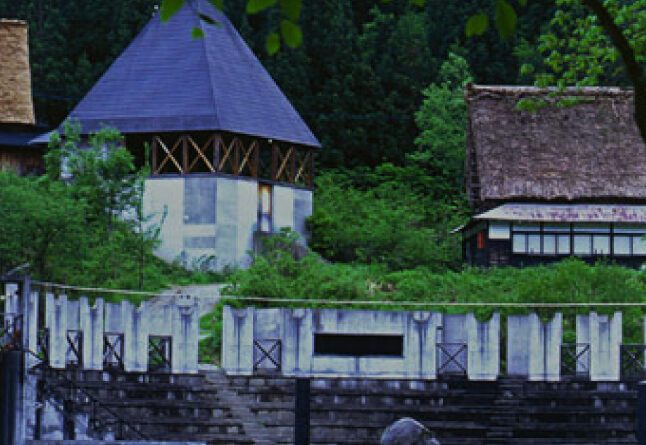 The basis for theatre craft is the work of the feet . . .

Tadashi Suzuki “The Grammar of Feet,” The Way of Acting

Critical Stages/Scenes critiques pays tribute to one of the greats of world theatre, the latest IATC Thalia Prize winner: Tadashi Suzuki, the Japanese director and teacher whose theatre vision has for years been a real inspiration for critics, audiences and artists alike around the world.

Tadashi Suzuki (born 1939 in the small port mura—village—Shimizu beneath Mount Fuji) is the founder and director of the Suzuki Company of Toga (SCOT, 1984)—originally called Waseda Sho-Gekijo, founded in 1966—based in Toga village (since 1976), located in the mountains of Toyama prefecture. He is also  the organizer of Japan’s first International Theatre Festival (Toga Festival, 1982), the creator of the Suzuki Method of Actor Training, member (since 1994) of the International Theatre Olympics Committee (with Theodoros Terzopoulos, Yuri Lyubimov, Tony Harrison, Heiner Müller, and Robert Wilson), a founding member of the BeSeTo Festival (jointly organized by XU Xiaozhong from the Central Academy of Drama, China and Kim Eui Kyung, president of the Korean Center of International Theatre Institute,  1994), for a number of years director of Shizuoka Performing Arts Center (SPAC, 1995–2007) and Chairman of the Board of Directors for Japan Performing Arts Foundation (2000), a nation-wide network of theatre professionals in Japan. With American director Anne Bogart, he co-founded the Saratoga International Theatre Institute (SITI)  in Saratoga Springs, New York, where he presented a bilingual production (Japanese/English) of Dionysus.

In addition to his creative work as director, Tadashi Suzuki has articulated his theories in a number of books, most notably The Way of Acting: The Theatre Writings of Tadashi Suzuki (1986), a collection of writings that provide an accessible approach to his training method animated by ancient forms as well as avant-garde.  J. Thomas Rimer, the translator of the book in English, writes in his introduction:

Tadashi Suzuki, one of the foremost figures in the contemporary theatre, has long been acclaimed, first in his native Japan, then in Europe and the United States, for the striking intensity, beauty, and communal energy of his theatrical productions. Those who have seen them will quickly surmise that behind the always powerful encounters that Suzuki engineers between his actors and his audiences lie both a philosophy of performance and a rigorous discipline that are unique . . . Suzuki’s writings reveal the psychology of a thoroughly contemporary art. Challenged to absorb ideas from a wide variety of sources, he works to create a powerful synthesis of the dramatic arts.

Suzuki has taught his system of actor training in schools and theatres throughout the world, including The Julliard School in New York and the Moscow Art Theatre. The Cambridge University Press published The Theatre of Suzuki Tadashi as part of their Directors in Perspective series. (For more on Suzuki’s profile, visit his webpage; also, Ian Carruthers and Takahashi Yasunari).

At a time when we are all running out of breath trying to keep up with the dictates of high technology, its frantic biorhythms, its ephemeral impressions, its elusive and delusive representations, Suzuki’s theatre invites us, artists and critics (and audiences), to delve deep into our egos and reconnect with what we truly are and what we want to be; in short, he invites us to refocus our attention on what we tend to forget, the holistic self (for more, see Allain, or visit: https://vimeo.com/channels/tadashisuzuki).

Rooted at the intersections of self, same/other and the world, Suzuki’s understanding of theatre (and theatre training—not to mention viewing) somehow resembles a Homeric peripeteia, a long but worthwhile odyssey whose final destination is each one’s personal Ithaca: that is, the uniqueness of the individual body and soul/mind.

The physicality of Suzuki’s stage images, the stylized orchestration of body movements, slow and fast, forward and backward, its synchronized gestures, its Asi-byoshi (stamping), its Sur-ashi (sliding the feet), the cries, the words, the chants, the sounds, the ancient songs, the colors, the beats, the props, the silences, the repetitions, the juxtapositions, the combat techniques, all seen together create a miraculous stage panorama of cross-cultural connections between Western and Eastern theatre, of localities and globalities; a “glo-c-al” assemblage of similarities and differences, of “samenesses” and “othernesses,” which reflect, in more ways than one, the components of the postmodern world’s pluralism, its multi-layered physiognomy.

Suzuki, in an interview he gave at the University of California in San Diego, said the following about bridging the gap between the style of traditional Japanese Noh and Kabuki and that of modern theatre:

The traditional theatre of Japan relies on human beings. It communicates energy, not just words. . . . But no new plays are being written for Noh and Kabuki, at least none good enough to perform. In that sense, Noh and Kabuki are dead. They are interesting, in the same way a mummy in a museum is interesting—because it’s dead. But modern Japanese cannot be with dead things always. Sometimes we must be with the new.

Tadashi Suzuki’s stage world and critical thinking draw on the national Japanese traditions but refuse to surrender to strict and limiting cultural and/or national borders or to any totalizing concepts or “authenticities.” Whether focusing on the Greek classics, the Elizabethans or the Japanese, his aim remains the same: to create an ever-shifting, ever vibrant space in which performers (and critics) fuse reflective openness to the new with reflective loyalty to the known (for further reading, see Coen; Zarrilli; Sant; Bogart; Brestoff; Goto).

Watching his performances or participating in them is like leaving yet remaining at home; a fascinating slalom between two seemingly opposing poles: the familiar and the unfamiliar. With great dexterity, Suzuki transcends cultural, critical and artistic boundaries, while maintaining at the same time the space necessary to safeguard the “individuality and the personal secrets of history,” as he himself confesses (for more, visit his webpage: https://www.scot-suzukicompany.com/en/philosophy.php).

Through his rigorous, penetrating training method and stage poetics, Suzuki brings out into the open the darkness inside, “the unknowable and unmeasurable,” as he calls it, the secrets and the distinct features of the actor’s body, so that s/he can share them with others on stage in front of an audience. With meticulous care, he cultivates this creative impulse which in the end opens a window for artists (and critics) to transmit their individual experience to the world. It is the moment they transcend the boring and the tedious by releasing the suppressed “hidden animal energy,” the moment when those who are involved (as participants and/or viewers) experience freedom by reconnecting to nature, their own and others’. In his illuminating essay “Culture is the Body,” Suzuki has this to say:

Just as the eyes’ natural capacity to see has been diminished through the invention and use of the microscope, etc., modernization has severed our natural organs from our essential selves, entrusting an increasingly larger portion of their workload to non-animal energy. . . . all innovations created for the sake of civilization’s progress are the material result of efforts to minimize the use of animal energy. As a consequence, the potential of the human body and its various functions has undergone a dramatic downsizing, weakening the communication between people that is based on animal energy. . . .To counter this debilitating modernization of the actor’s craft, I have strived to restore the wholeness of the human body in performance, not simply by creating variants of such forms as the Noh and kabuki, but by employing the universal virtues of these and other pre-modern traditions. By harnessing and developing these enduring virtues, we create an opportunity to re-consolidate our currently dismembered physical faculties and revive the body’s perceptive and expressive capacity. Only by committing to do so can we ensure the flourishing of culture within civilization.

Suzuki encourages theatre people to discover new personal and interpersonal perspectives on the world we live in and share them with the audience (and the reader, in the case of critics). In his mind, sharing is like “a collective epiphany,” that remaps cultural borders and boundaries. The last paragraph in his essay “Promise of Theatre” sums up his philosophy of sharing:

As I was born in Japan, the principal stronghold of my endeavors as a theatre artist has been Japan. However, I have collaborated with innumerable artists from outside of Japan in a variety of theatrical enterprises, through which I have come to the conviction that for any artist, home is not a matter of where one was born or operates. Rather, there exists a home within the heart, joined by powerful emotions and in solidarity with others, where human beings can find repose in.

That said, let me conclude this brief introduction by quoting once again Suzuki’s own words, this time from his “Lonely Village and the Theatre’s Vision,” which I find most appropriate: “We must pursue our ideals until our dying day.” Theatre is a “quixotic pursuit of an impossible dream,” driven by the desire to battle on, “fighting the lonely fight of the defeated, in the face of hopeless odds.”

Thank you, Tadashi Suzuki for this precious legacy. It is our duty to safeguard it.

Brestoff, Richard. The Great Acting Teachers and Their Methods. Smith and Kraus, 1995.

Carruthers, Ian, and Takahashi Yasunari. The Theatre of Suzuki Tadashi. Cambridge UP, 2004.

*Savas Patsalidis is Professor of theatre and performance history and theory in the School of English (Aristotle University, Thessaloniki), the Hellenic Open University and the Drama Academy of the National Theatre of Northern Greece. He is also a regular lecturer on the Graduate Programme of the Theatre Department at Aristotle University. He is the author of fourteen books on theatre and performance criticism/theory and co-editor of another thirteen. His two-volume study, Theatre, Society, Nation (2010), was awarded first prize for best theatre study of the year. His latest book-length study Theatre & Theory II: About Topoi, Utopias and Heterotopias was published in 2019 by University Studio Press. In addition to his academic activities, he works as a theatre reviewer for the ejournals lavart, parallaxi, and thegreekplay project. He is currently the president of the Hellenic Association of Theatre and Performing Arts Critics, member of the curators’ team of Dimitria Festival and the editor-in-chief of Critical Stages/Scènes critiques, the journal of the International Association of Theatre Critics.