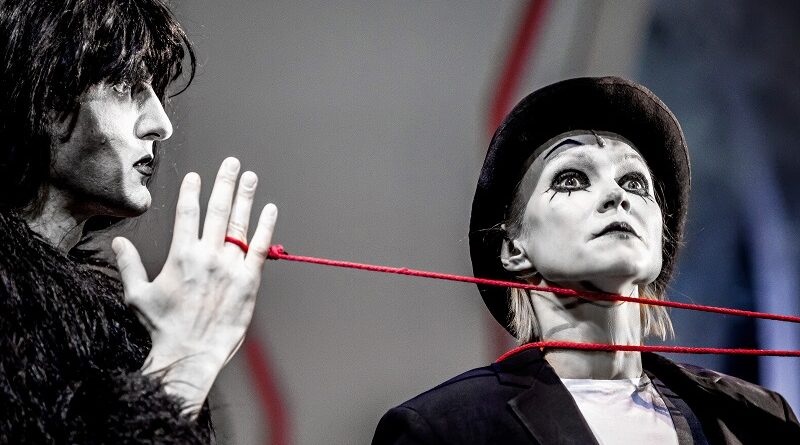 Lessingtage presented almost 20 shows online, from different European theatres, to give audiences the opportunity to see a wide range of directors’ styles and messages. A strong feeling emerges that the theatre languages shown are alike; they discuss similar subjects from similar perspectives. Spirit of crisis, feeling of lost paradise and fear of collapse in the future characterized most of these productions. Of course, the way of speaking depends on the particular text, classical, contemporary or devised, but the mood of these shows could be described as the end of Europe or end of humanism.

Paradise flood/hunger/play based on the play by Thomas Köck. Christopher Ruping’s (Thalia Theater, Hamburg) staging was a very dynamic and brutal collection of scenes in which all types of up-to-date clashes are shown. Misjudgments, everyday failures, psychological fears of common people are investigated by the director in a very aggressive way. We see the desperate of the world in a combination of visually effective pictures and an affective style of acting. Everybody shouts in this world—that is the core of Paradise now.

In Enemy of the People, based on Ibsen’s famous play and directed by Volker Losch (Schauspielhaus Düsseldorf), the scenography uses colorful plastic cars. This image demonstrates how modern authorities neglect the ecological agenda and try to fill the world with electronic cars, instead of taking measures to protect the environment. Nothing happens in this world without the approval of capitalism—in this sense, Ibsen is absolutely topical now. Director Volker Losch and playwright Lothar Kittstein have adapted the text from 1882 to present day reality with young environmental activists from Düsseldorf. This performance combines surrealistic futuristic images of cars overwhelming the world with a declarative way of theatrical speech which made the show more like a political meeting.

Almost all the shows on the list were adaptations of classical texts. Besides Enemy of the People, there were two performances based on The Idiot by Dostoevsky—one from Dramaten (Stockholm), the other from Theatre of Nations (Moscow). The Idiot of Mattias Andersson, artistic director of Dramaten, transformed the core of Dostoevsky’s novel—I mean Prince Myshkin, the new Christ—into a story about a person who was born privileged and throughout his life tried to show generosity—or was he really good? This is the question—to be or seem to be? Mattias Andersson moved the original confrontation into the current social and political agenda, as he did in previous works such as Crime and Punishment at Gothenburg Theatre (2007).

The Idiot of young Russian director Maxim Didenko is an example of a choreographic approach to the plot. Made at the Theatre of Nations, one of Moscow’s gorgeous theatre houses, this show stylized “cirque noir” with specific make-up and costumes. The main male character is played by the actress Ingeborg Dapkunaite, who discovers the transgressive nature of Prince Myshkin. Maxim Didenko studied psychological dramatic theatre in St. Petersburg and physical theatre in Dresden, where Anton Adassinsky had been working for several years. His way of making theatre is grounded in the eccentric nature of physical movement.

The most common way to present a classical text is by adapting it to suit today’s reality. So, this Belgian version of the Antigone and Tiresias myths—Antigone in Molenbeek (Toneelhuis, Antwerp)—is seen by director Stefan Hertmans and playwright Kate Tempest as the stories of two isolated persons who suffer from the repressive power of authority. Antigone stays behind her transparent glass cube filled with white powder, littering the floor by scooping from it and shouting her monologues. Tiresias, a 15-year-old boy, transforms into a woman because he feels himself to be a woman. The characters are surrounded by a live orchestra playing the music of Dmitri Shostakovich. They are struggling against authority oppression, defending the right to privacy and the right to bury their own brother. The point is that our modern multicultural society is not about political correctness but full of aggression and hate.

Mary Stuart, based on Schiller, directed by Anne Lenk for Deutsches Theater Berlin, is a big-scale performance with a multi-functional, laconic set design, constructed as a net with separate sections, each of which can transform into a prison cell with red walls. Mary Stuart, who is about to be executed, is standing in a narrow prison so small that it looks like a claustrophobic space. Her “crime” is not proved, but the machinery of execution cannot be stopped. This powerful person is faced with loneliness and isolation.

Another piece in the program was about a woman who became the victim of her own media image and the expectations of her audience. UNA (One Woman), directed by Raquel Cors and written by Dani Lacasa for Teatre Lliure (Barcelona), investigates the public and private life of Eva Lyberten, an icon of Spanish softcore of the 1970s-1980s. She plays the role herself, reminiscing about both her past and her image. The erotic movies in which she participated were examples of secret beauty and unacceptable desire, but her inner nature was hidden behind these glamorous iconic images. The core of the character is the contradiction between fiction and reality.

A female character is also at the centre of Nora, Christmas at the Helmers’, directed by the young Hungarian director Kriszta Szekely (Katona Jozsef Theatre, Budapest). Ibsen’s famous play set a feminist agenda at the end of the 19th century. As time passed, step by step, woman’s place in the world also changed. The question of gender equality is still one of the hot issues now. In Szekely’s production, we see a cozy home preparing for Christmas. We also see harassment of the wife, children, mutual recrimination and unhappiness. Where are the roots of this drama? Can we avoid it from the beginning of any relationship? Do we really need family as a lifestyle? What do we actually want now?

Finally, in The Caucasian Chalk Circle, based on Brecht and directed by Michael Thalheimer for the Berliner Ensemble, we see how important it is to keep hold of your personal humanity and empathy. Brechtian dialectic shows a conflict about the baby who was passed from one mother to another. When the revolution was over, the court tried to return the baby back to its original mother. But was this better? To be back to your natural mother even you do not remember her, or to stay with the one who saved you in your childhood? Michael Thalheimer created a very expressive and brave performance in which passions are openly displayed and, at the same time, intellectualized.

All these productions are examples of big, well-made theatre with “big messages.” There were no “weak” or at least non-perfect shows made by no-name persons. Just masterpieces or mainstream. It is relevant, probably, to the pre-pandemic theatre when budgets were big and the audience was grateful. Now, time has changed a lot. And I am waiting for no-name theatre pieces—not masterpieces anymore, just honest, modest and critical art.

*Christine Matvienko, PhD, theatre critic and curator, works at the Stanislavsky Electrotheatre in Moscow. Curator (with Elena Kovalskaya) of the social magister program at the Russian State Theatre Institute (Moscow).