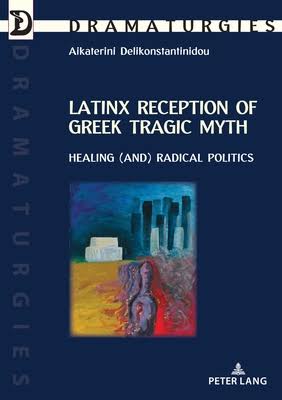 If Socrates was correct in his assertion that wisdom can only come to us when we finally apprehend just how little we understand about ourselves and the world around us, then Latinx Reception of Greek Tragic Myth: Healing (and) Radical Politics offers the field of ethnic studies generally and Latinx Studies in particular an important inoculation against this condition of knowing ourselves too little.

Latinx Reception offers an examination of the contemporary cultural production of four contemporary Chicana/o and Latinx playwrights in conversation with both contemporary issues confronting their communities and the histories and mythologies of the ancient Greeks. Through the examination of six plays inspired by Greek tragic myths revolving around four classical dramatic characters (Electra, Iphigenia, Medea, and Oedipus), these authors voice a present-day struggle with historical resonances.

Latinx Reception examines the dramatic revisions of these myths to reveal the complexities of mestizaje, or the mixed-race status of people of European and indigenous American descent. Along with the concept of the tragic, mestizaje makes up one of the text’s central unifying ideas behind its subjects’ civil and curative functions. Thisenthusiastic exploration of Latinx theatre and its adaptations of classical Greek tragedies stands as the first contemporary monograph to tie Latinx studies and adaptations of ancient Greek plays and myths together through a dramaturgical treatment of work by four contemporary playwrights.

The work of these four—Carlos Morton, Cherríe Moraga, Luis Alfaro and Caridad Svich—as well as the subaltern communities they explore in their work (gang members, victims of domestic violence, LGBTQ+ and undocumented communities) is covered in seven chapters framed by a prologue and epilogue. The text is further organized into a layering of four thematic sections: Mestizx Medeas, Mestizo Oedipus, Tragic Daughters I: Mestiza Electra, and Tragic Daughters II: Mestiza Iphigenia.

Beginning with a Prolegomena and a section on Mestizx Mythopoesis, the text attempts to lay out a trajectory from “Pre-colonial Myths to Post-colonial Mitos and Beyond” (18) an important intervention given that when the Spaniards finally conquered Tenochtitlán in 1521, one of the first tasks they set for themselves was the severing of the tendons that tied the autochthonous peoples of the Americas to their pantheistic mythology. It was only by this erasure, however tenuous, of indigenous epistemologies that the defeated became fully subjugated. With this connection these texts can be framed as contemporary cries for myth.

It is after this section that we learn of the logic behind the selection of writers and their works summarized as works representing “a crucial development in the theatre of the Latin American diaspora in the U.S.,” “the beneficial role of this kind of revisionary theatre in the experience of (sociocultural) trauma,” and these work’s conduciveness towards “carving out space for the advancement of existing an cultivation of new cross/inter/transcultural bonds between Greek and Latinx culture(s)” (16–17). The book then moves the reader into an in-depth study of what it calls the tragic mode.

In the Modus Vivendi section of the chapter on the tragic, the text argues for the tragic not as an essence but as a mode, enabling it to locate the tragic in a more historical, philosophical and political context. The most trenchant justification for this chapter’s argument comes in the form of an assertion that “to find no meaning in suffering is to leave history not only unredeemed but unmourned and forgotten” (64). By drawing on ideas from writers as diverse as Augusto Boal and Friedrich Nietzsche, an alignment between the tragic and a therapeutic paradigm is attempted, thus asserting a regenerative power to both real world and dramatized tragic events, situation and scenarios going as far as to argue the tragic as “politically significant, and even radically transformative” (66).

The book frames its next three chapters: La Malinche, The Hungry Woman: A Mexican Medea and Mojada as representations of “Mestizx Medeas” based on the exploration of this character’s mythology. It is in this section that the book begins to read more like an edited collection rather than a unified monograph. The opportunity to locate writers like Moraga and Morton in their proper context, as the trailblazers of Greek adaptations into the Chicana/o experience, is passed up in favor of a more compartmentalized analysis of their individual works.

Then too there is the omission of relevant information concerning these writers. For example, nothing is said of Moraga’s controversial stance on inclusive pronouns and transgender people. This is an incongruous omission given the text’s critical analysis of the plays as they pertain to queer sexuality and its intersectionality with historical, commercial and political exchanges. The loose attention to grammatical conventions further distracts from the arguments of the text, and in the latter part of the book, one realizes that the text’s commitment to critically examining these plays is imbued by an excessive generosity that prevents it from exploring some significant problems with the material. Chief among them being the dismal level of Spanish language writing fluency some of the featured writers possess.

For example, Alfaro’s blatant misspelling of Bruja as “Bruha” (116) is glossed in the text and goes without comment; as does his maladroit sprinkling of Spanish language words and phrases in many of his plays. To credit Alfaro with “firmly situating” his plays “on a linguistic and cultural borderlands” (120) demands a more robust treatment. More generally, however ,nothing is said about the possibility of these adaptations being manifestations of a Colonial mindset that delivers some of these writers to embrace Greek narratives to shield themselves from their deeply rooted inferiority complexes and overall feeling of inadequacy.

The latter part of the book is comprised of chapters dealing with Oedipus, Elekta and Iphigenia along with production histories of their corresponding plays: Oedipus el Rey, Electricidad, and Iphgenia Crash Land Falls on the Neon Shell That Was Once Her Heart: A “Rave” Fable (Iphigenia Crash). Beginning with a section that sets the stage for the ways that each of these plays are grounded in or based on Greek source material, the text then explains how each play formulates “their radical political” and “therapeutic function” (256). It is in the final chapter dedicated to analyzing Svich’s work that the text is most engaging since it provides the clearest reading of any of the plays and demonstrates the skill with which Iphigenia Crash mobilizes both theatricality and dramatic irony to create a true composite of its Greek and Latinx sources. In fact, Svich’s Iphigenia Crash and Morton’s La Malinche are proof that Latinx writers can draw from Greek myths not simply to follow in the steps of the ancient Greeks, but to rather, seek what they sought. The book closes with a chapter caleld Epilegomena which hopes that its message will “further enrich existing accounts of the peculiarities” (253) of the Latinx theater landscape. I share Delikonstantinidou’s hope since this book, with all its challenges, stands as an important contribution by a writer who writes in genuine solidarity with a people who, at the end of her book, will know themselves a little bit more and, by Socrates’ measure, be a little bit wiser.

*Guillermo Avilís-Rodríguez is a PhD candidate in the Theatre and Performance Studies department at UCLA and a Lecturer in the Chicana/o Studies and Theatre Departments at California State University, Northridge. Among his article publications are “Theatre and Transit: A Transit-Oriented Site-Specific Triptych” in Theatre Forum; “Darning Zoot Suit for the Next Generation” in Aztlan: a journal of Chicano studies; “Ethics and Site-Based Theatre: A Curated Discussion” in Theatre History Studies (Co-authored), and the forthcoming (fall, 2021) “Playing Hopscotch in Traffic” in the Cambridge Opera Journal.