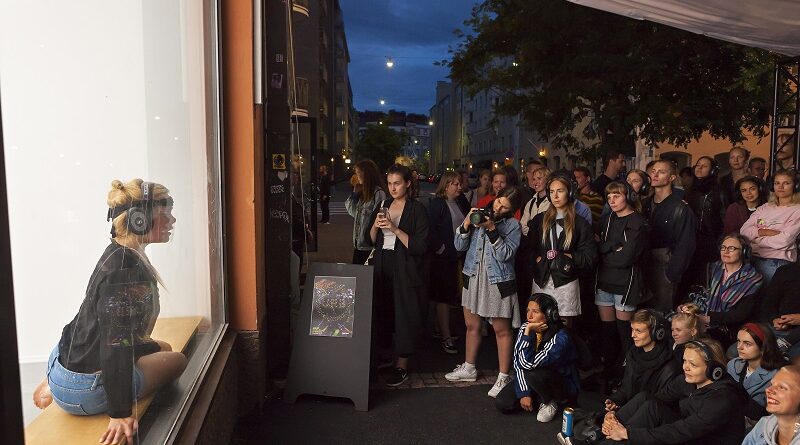 We have never lost sight of the need to continue working, so that we can greet the audience again with our artistic productions. This does not necessarily mean going back to what was “normal” before, but it could be different.

Established in 1994 as a biannual event, the Gothenburg Dance and Theatre Festival is set on promoting Gothenburg as a city well connected with the contemporary international performing arts. Its founding artistic director, Birgitta Winnberg Rydh, was the main curator for 20 years, until she resigned in 2014. As of 2016, the festival was restructured, being integrated with one of the city’s main public theatre institutions, Stora Teatern. The new festival director, Martin Hansson, also head of the Stora Teatern, decided that each edition of the GDTF should be prepared by a group of producers and curators. This group is modified with each festival, Sarah Melin however being permanently employed as a producer and chief curator.

In recent years, the GDTF has expanded into the Western county around Gothenburg, collaborating with several smaller cities. They can offer long-term residence opportunities as well as smaller performance venues and spaces that may be interesting for outdoor site-specific projects. Within the city of Gothenburg, several independent venues are participating in the festival, along with the larger institutions. The biennial has thus become an important boost to the local and regional performing arts scene.

From an international point of view the GDTF is a relatively small sized festival, with a budget turning around 850,000 to 1.2 million euros. Marked by a distinctly international profile and a fair proportion of bold artistic projects, it stands out as perhaps the most important among Swedish theatre festivals. In a talk with Critical Stages/Scènes critiques, curator Sarah Melin emphasizes the importance of the international productions:

Lately we have included some Swedish productions, but the main aim with the GDTF is to invite international productions that the local audience would not normally see.

The festival is a member of a few European networks, and its programme consists mainly of touring guest performances. Previously associated with the EU network NXTSTP (2007–2017), the GDTF has also been a partner in co-productions and more extensive collaborations.

When you co-produce you also invest in artists, you take a certain risk with each artistic process. That is truly exciting. More challenging, however, is to get the audience to follow, since we are only a biennial event. Within the NXTSTP programming we were presenting emerging, less established artists, whose work could be quite experimental.

Today we are part of Creative Europe and its project Be SpectACTive!, which has been quite helpful in developing strategies for working with the audience.

One of the challenges to a biannual festival like the GDTF is to establish a relation of confidence with the audience over time. People need to rely on the artistic choices of the festival curators in order to respond to the programme with an open mind. Sarah Melin and her colleagues are very aware of this.

Generally the audiences are regulars at some particular venue or institution, like the Atalante (a smaller, independent venue), the Gothenburg City Theatre or the Opera. We are trying to connect with the artistic profile of each house. Before programming our festival we generally ask them if they are planning for a certain theme to be running through the season, so that we may be in tune with their own activities and companies. This dialogue is very rewarding, but it does take a lot of time.

Sarah Melin finds it essential to draw on the existing skills and professional experiences within the different houses. They are usually open-minded and keen on experimentation with new forms and formats.

Sweden has a small impact in larger international networks, whereas neighbouring Norway has a myriad of small international theatre festivals. This, however, is of great interest to the GDTF.

Scandinavian collaborations are traditionally going through more or less active phases. But now they are becoming more important, not only for financial reasons, but also due to our considerations for a more sustainable touring. If we are to continue inviting companies from other parts of the world, we need to share a responsibility for coordinating their tours regionally between the Nordic/Scandinavian countries. We can for instance collaborate with the BIT Teatergarasjen and Carte Blanche in Bergen (Norway), Zodiac in Helsinki, Norrlandsoperan in Umeå, The Cullberg Dance Company in Stockholm—a great number of different venues or festivals. Over the past two years, we have been discussing how to collaborate within the dance sector, also bringing more impact to our presentations abroad of artists from the Nordic countries, and indeed inviting artists in residence to our countries.

Within the EU projects it may be difficult to have a decisive influence. According to Sarah Melin, the NXTSTP organisation was marked by a Central European and continental dominance.

It could be difficult for us to introduce Swedish artists. Very often we were met with a friendly curiosity from our fellow European curators, but they also needed to get to see the work and they very rarely did. The Nordic region is still quite far away from central Europe. The gap was even deeper in the drama sector.

For a long time Sweden has remained an outsider of the festival circuits within European theatre. The biannual Dramaten Bergman festival has slowly gained an importance, and foreign star directors are regularly invited to work at some of the larger public theatre institutions, but there are hardly ever any international co-productions involving Swedish theatre institutions. Dance companies are generally better connected with the international scene. The GDTF is therefore a key event in the international exchange. So how has the festival been affected by the COVID-19 pandemic?

As we cancelled the 2020 festival, we decided to move the program on to August 2021. Since that also turned out to be impossible, we will now have a festival running along the entire season of 2021/22, as a temporary way of honouring our artistic collaborations and of supporting the performing arts industry. It would have been easy for us to wiggle out of the contracts we had and cancel altogether, but it was essential for us to support the different companies that we are working with.

The festival 2021/22 will set off with five productions, some of them European co-productions. And then the entire programme will be spread out over the season, until July 2022.

In 2023, we organise a smaller gathering, with workshops and other events. The next time we will have a proper, ordinary festival is in 2024. The identity of our event is of course strongly related to being focused on a limited number of festival days.

Sarah Melin reflects on whether anything beneficial may have come out of this crisis. Has anything changed in her view of the festival culture? Is it realistic to work with people from across the world?

We have been obliged to find new ways, other ways of working. What I find inspiring is to see how many artists have started developing different formats, not just like Zoom performances. But there are certainly embryos of artistic pieces that can be further developed even in a post-pandemic context with houses reopened.

It has also been a relief to be part of this European network where 16 members from different countries have encouraged each other into hoping for the future, despite very challenging situations.

We have never lost sight of the need to continue working, so that we can greet the audience again with our artistic productions. This does not necessarily mean going back to what was “normal” before, but it could be different. I do hope that we can share that optimism.