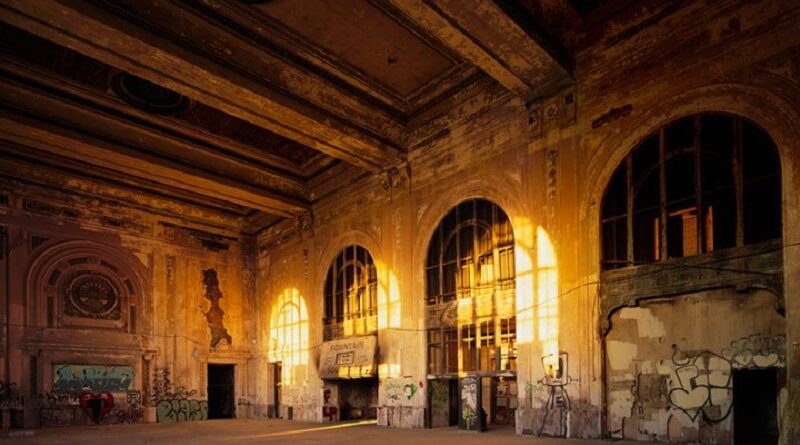 There it was!—the legendary South Pacific train, pulled into the stunning Beaux-Arts railway station in thriving West Oakland. It stood ready with its expert crew, spiffy porters and graceful maids to take passengers in style and comfort to destinations across the young nation! And here is its cheerful conductor now!

It is a testament to the illusion of this clever and moving installation-event that we were actually sitting in our cars in the disused parking lot of the abandoned train station in an especially sorry part of town. The images of the train were projected onto the front of the building, along with slides of the historic station, gleaming tracks, maps of the routes, newspaper headlines.

Late in 2020, our county expanded its COVID health orders to allow heavily regulated “vehicle-based gatherings.” Drive-in theatre was a natural outgrowth, reminiscent of the beloved drive-in movies (and restaurants) of the 1950s and 1960s. But now, we had to stay in our cars, windows up, with the show’s soundscape transmitted through our car radios. In the world of drive-in theatre, instead of clapping, we honk our horns.

Binding Ties was the perfect, outdoor show for this expanded health order. Brainchild of the impressive Stephanie Anne Johnson in 1991, it was ready for a drive-in, 30th anniversary production by the Oakland Theatre Project. Dr. Johnson has used her 40 years of experience as a lighting designer—local, national, international—to bring into view people who have been “forgotten” by our culture, with particular focus on, and tireless contributions to, recognition of African Americans. She is well-known for her slide projection pieces which, she says, “combine the ethereal nature of light and the solidity of architecture to symbolize a balance between the spiritual and material worlds.” In this case, Johnson employed her signature tools—light, historical artifacts, archival photographs and live narration—to evoke the early- to mid-twentieth century ghosts of the Southern Pacific Railway and its people, as seen through the lens of the 16th Street Station.

Inside and out, the decaying landmark begs for a theatrical event. Built in 1912 as the West Coast terminus of the network of railroads that first started expanding across the U.S. from the 1860s to the 1880s, in its heyday the station saw around 400 trains per day. The area around the station featured lovely Victorian houses—many still standing—and from the 1940s to 1960s, had a hopping, nationally recognized jazz and blues scene. This area was tragically divided by a freeway (1955) and tracks for a new subway (1974); the 16th St. station itself was badly damaged in the 1989 earthquake; newer train stations grew up nearby (1994): 16th St. saw its last train in 1994. Since then, it has been closed to the public, on the shortlist of Most Beautiful Abandoned Stations in the World, a site for squatters, a magnet for daredevil photographers, a film location and, since 2005, the object of architectural preservation efforts to restore it as a community center and performance venue.

Sitting outside in the dark, 1930s country blues came through the radio, setting the mood. The fellow on the right in the poster seemed to materialize before us. This was Oakland Theatre Project’s William Oliver III (Death of a Salesman, A Midsummer Night’s Dream), the only live actor in this production (a live actor a novelty after innumerable shows streaming!)—the Conductor, whose narration at the beginning and ending framed the show.

On a larger historical scale, the show told the story of the internal migration of Black Americans from the southern states to Oakland for jobs on the railroad: construction, switch operation, track maintenance and more. When the Civil War ended in 1865, the Pullman line of luxury sleeping cars snapped up freed slaves and other Blacks who were initially willing to work as porters for a pittance. Gradually, the courtesy and efficiency of these porters became the shining face of elegant train travel in America; in 1925, the porters began their twelve-year struggle for decent wages and working conditions to become the first African American labor union in the United States: the Brotherhood of Sleeping Car Porters. This was achieved when Blacks in the U.S. were still segregated in public places. This history still haunts America today.

On a more intimate level, there were original photos and first-person, archival interviews with those who actually made the travelers’ experience so gracious, and which gave a sense of the pride, dedication—and spirited competition!—they brought to their jobs as porters, cooks and maids. Porters talked—sometimes in southern accents tricky to follow—about carrying baggage, serving food and drinks from the dining car, shining shoes, tidying the cars, mopping, cleaning windows. A fellow who had been in charge of making up beds gave a precise account of the number of pillows and blankets, and exactly how he managed the sheet around the mattress. We heard how the porters broke up blocks of ice to provide passengers with cool water by their beds, and that the cooks, in pristine white aprons and high chef hats, put a rose on each tray of delectable food. The maids, in sleek gray dresses, modest white caps and aprons, described greeting the passengers as they boarded, escorting them to their seats, folding their coats, refrigerating their baby formula, feeding their babies at 10:00, 2:00, and 6:00. One woman who worked the night shift got off work at 8:00 a.m. and hurried home to get her children ready for school. We heard the names of the stations on the California line lovingly recited, names they had heard countless hundreds of times: Crockett, Martinez, Tracy, Merced, Tulare, Fresno.

A different production on the construction of American railways might tell more of the story of Blacks, Mexicans, Indigenous Indians, Pakistanis and Chinese laborers all working together. Certainly, the multitude of Chinese workers—injured, frozen, starved, murdered—deserve recognition. But this wasn’t that production; its focus was on “what it meant to be a railroad man,” especially for Oakland’s Black Americans, with their unique history—a fascinating, dramatic tale by any measure.

Along with marching bands, it was in the music of Kevin Myric’s sound score that we got most of the multicultural flavor of the national railroad endeavor. The jaunty ragtime of African American Scott Joplin (d. 1917) gave us a basic feel for the era; the Indigenous Indians were heard in the flute, the Pakistanis in the sitar. The Mexicans, it was said, called to each other and the Blacks sang; we heard one example, “Hear That Train Comin’ Down the Track.” Across America, everyone celebrated trains in song! A charming songstress sang multiple verses for “I Got Some People in Me”: Irish, Hawaiian, Chinese, German, African, Jewish, Arab and Mexican.

The drive-in theatre format will surely address some of its challenges over time. The sightlines weren’t always perfect. With windows required to be up, the windshield got foggy. Sound reception was hit-or-miss, and with engines off and radios on, one car’s battery died (theatre staffers immediately provided jumper cables).

The title, Binding Ties, is a pun. Writer Anne Brontë (d. 1849) first used the phrase “the ties that bind”; nowadays, it refers to the invisible relationships—“ties”—that connect or “bind” all people. The Southern Pacific Railroad helped “bind” America’s people with “ties,” the wooden cross pieces under the metal tracks that support them. With this feeling of connectedness, our Conductor closed the show: “Oakland is some kind of town . . . You’re all a part of it now.” And we were.