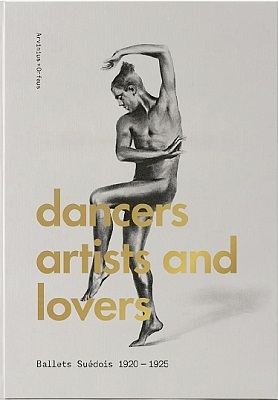 ­­­­­­­­­­­­­­­­­The pioneering work of Stockholm’s now long-gone Ballets Suédois appears as a bold and luxurious period in the history of dance. This new anthology written by a team of international researchers in art, dance, theatre and music gives a variety of perspectives on the impact of this 100-year young dance company.

Scene: New Year’s Eve, 1924. The Théâtre des Champs-Élysées in Paris. The piece part of Cinésketch, an improvised satire staged by Francis Picabia. The American photographer Man Ray captures the moment where the artist Marcel Duchamp and the model Bronja Perlmutter pose in the nude as Adam and Eve, a paraphrase of the painting by Lucas Cranach the Elder. Ray’s photo, funny and challenging, shows us God’s creations—Adam and Eve in paradise—as a pimp and his prostitute.

Cinésketch is usually not spoken about much, but it is one of the 26 works that Ballets Suédois created during these five years. Indeed, this avant-garde revue was performed only once and ends this epoch in the Swedish history of dance—but it should be discussed just as it is here because it points forward, towards those cross-border productions of performance art and happenings that would follow later during the twentieth century.

Written about briefly in Bengt Häger’s 1989 volume Ballets Suédois, an essay in this new book by the French art historian Frank Claustrat places it as a rebellious milestone and inspiration for modernists Merce Cunningham and John Cage.

A richly illustrated anthology, the book is part of the 100th anniversary celebrations of the Ballets Suédois. Credit here goes to the Swedish Dance Museum (founded in Stockholm by Rolf de Maré in 1953), which mounted an exhibition in 2020 to celebrate the event entitled Om ni inte gillar det kan ni dra åt helvete (If you don’t like it, you can go to hell), a quote by Picabia himself.

Erik Mattsson, curator at the Dance Museum in Stockholm and editor of the book, notes that the ten different chapters—each with a specific approach—gives a picture of how international and how elusive the Ballets Suédois really has been artistically, geographically and aesthetically. Indeed, its early existence was a mirror of the hopeful post-war one period in which the world opened up. Yet, despite the company’s norm-breaking aesthetic, the volume is a reminder of how art is often characterized by paradox, circumstance and the people involved.

The exhibition itself was based in large part on the charged relationship between rich art patron Rolf de Maré and his less well-to-do protégé, dancer and choreographer Jean Börlin, the company’s star and visionary. In the book, you also get to know more about  other dancers and meet key people behind the scenes: the 25-year-old wardrobe mistress Lilly Åsberg, for example, who had responsibility for every costume during their tours; and the little-known Jacques Hébertot, a Frenchman with a keen interest in dance who knew de Maré and came up with the idea of ​​starting a Swedish equivalent to the more well-known Ballets Russes which was already established in Paris.

Also clear is the image of the company’s media-driven strategist, the theatre director and impresario working alongside de Maré, Hébertot. It was he who participated in the recruitment of eleven dancers from the Stockholm Opera, which, to the anger of the Opera House’s management, drained the company of its young talent, a group attracted by both larger salaries and stimulating adventures.

Karin Helander, a professor of theatre studies, describes the storms around the Swedish Opera, a not-so progressive institution at the time, where the Russian choreographer Mikhail Fokine’s guest performance ignited a spark of renewal among the younger dancers. When Jean Börlin returned there in 1923 to do Bergakungen, this Swedish fairy tale ended up at the centre of an ongoing conflict with different interests standing in the way of new directorial ideas about multi-disciplinary stage works in which all art forms had equal value.

From the large amount of source material, the writers pick out insightful quotes that give a real scent of the 20s and its special zeitgeist. That said, sometimes material is repeated and sometimes information is contradictory.

One particularly interesting essay is by Canadian art historian John Potvin, who writes about the gay dancer Jean Börlin against a background of the time when the male body became a projection of national”health” ideals, with sculptures of antiquity as model. Certainly, both the Ballets Russes and Ballets Suédois placed male dancers in such a light rather than focusing it on females. Their two stars, Vaslav Nijinsky of the Ballets Russes and Jean Börlin of the Swedish company, cultivated an androgynous, physically explicit stage persona which aroused both desire and strong homophobic reactions.

In another essay, the Danish researcher Karin Vedel describes how dissatisfied the six male dancers recruited from Det Kongelige Teater in Copenhagen were with the repertoire they were asked to dance at Ballets Suédois. They had hoped for developmental challenges and complained in a letter to Börlin that not only did they not have prominent roles, but those that they did have, were mostly in folk dances.

It was, in fact, Swedish folkloric-based works that most attracted foreign audiences, works such as Les vierges folles and Nuit de Saint-Jean. These were performed several hundred times, while the more innovative African-inspired La création du monde, where the dancers became part of Fernand Legér’s cubist set, was played only twelve times.

Still, openness to other art forms and continents was crucial to the development and legacy of Ballets Suédois. Art historian Frank Claustrat calls La création du monde an anti-colonial work and considers that the company’s repertoire was opposed to xenophobia, racism, homophobia and even Islamophobia. His enthusiastic analysis echoes contemporary discourse but possibly lacks a problematization of the fact that borrowed elements from different cultures could also have features of exoticization.

Choreographer/dancers Petter Jacobsson’s and Thomas Caley write in the volume about how they tried to recreate the dadaist treasure Relâche (by Picabia, Börlin and Satie) in 2014. Theirs is an interesting grand finalé to a book whose very disposition corresponds to the dramaturgy in Relâche. The duo, who lead the Centre chorégraphique national/Ballet de Lorraine in France, describe how, with limited source material, much detective work and by trying to feel the zeitgeist, they struggled trying to revive this iconic work which in 1924 attempted to challenge audience passivity. It even included the mischievous film Entr ‘acte made by Picabia and René Clair.

Jacobsson and Caley speak of how societal development, trends and politics shaped the original as well as their own interpretation of it. Obviously, it is never possible to really recreate a bygone era or, perhaps, even fully understand it. But with their own contemporary version of a provocative Relâche, they certainly managed to arouse today’s audiences.

In sum, this is a book that clearly confirms the place of Ballets Suédois, its ambitions, resources and many original works, works that on their own constitute a luxurious period in dance history, one that still arouses interest and curiosity.

*Anna Ângström is the senior dance critic and editor for the national newspaper Svenska Dagbladet.