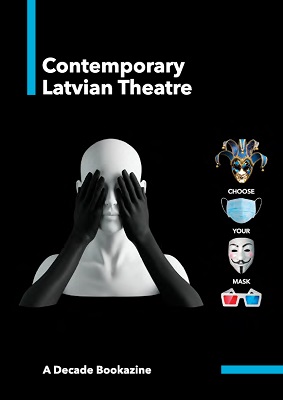 It seems only a moment ago that Guna Zeltiņa edited Theatre in Latvia (2012), and suddenly we have a new edition, Contemporary Latvian Theatre (2020), edited by Lauma Mellēna-Bartkeviča. Has theatre in Latvia really taken such giant leaps to necessitate yet another book? Does the interpretation of a country’s theatre change so completely in eight years?

Certainly what has changed are the contributors. All the new volume’s writers (save for Inta Balode, the dance correspondent) are new. Another generation has clearly taken over, though Zeltiņa herself remaining a member of the all-female, all-PhD editorial board.

Zeltiņa’s earlier book began with a general introductory essay and went on to detail the history of each professional company in the country. Not an impossible task, since they number less than ten. Mellēna-Bartkeviča’s new book, on the other hand, follows not companies but themes—the education of actors, digital sets, new directors, site-specific performances, devised productions and the like.

This gives the same productions several mentions in different texts, but it also means that there is no in-depth discussion of any particular production (nor particular directors nor playwrights). This requires the reader to be satisfied with morsels through the book rather than being offered a full meal featuring any specific production.

It should be noted here that the centenary of the Latvian state coincides with this new volume’s timeframe, always a good moment for national introspection especially in small countries. The current volume, however, only focuses on the 2010s probably because the earlier Zeltiņa volume already covered much historical material. But that means there is also a lack of context in the new volume.

It was during the Soviet occupation of Latvia between the Second World War and 1990 that the national theatres took on the task of preserving national cultural identity and the Latvian language. In this regard, Zane Radzobe’s essay argues that in the 2010s Alvis Hermanis with his New Riga Theatre changed the way theatre looked at national history: citizenship became not ethnic but political and came to exclude any unified point of view. In Valters Sīlis’s production about Latvians fighting in different armies during the war, for instance, the actors encouraged comments from the auditorium, and when faced with ideas which contradicted the factual course of events, they would counter with “so you want to change history?” According to Radzobe, the country’s understanding of historical meaning has been constantly evolving.

One real merit of Mellēna-Bartkeviča’s book is its well-deserved reappraisal of Alvis Hermanis’ work. Hermanis is the best-known director to emerge from Latvia. When I last visited the annual showcase of Latvian theatre in 2017, it seemed that Latvians had grown slightly weary of Hermanis’ mighty shadow (Latvian Directors Set Course for Beauty – Critical Stages/Scènes critiques (critical-stages.org)). Hermanis gets the last word here in an interview with the editor. He says, for example, of the use of video in theatre that, in future, it will be considered tasteless, and that spectators will visit the theatre like they visit the zoo: to watch “live real human beings.” Just 130 pages earlier, there seemed some slight embarrassment because Latvian directors were not employing video as much as, say, their Lithuanians neighbours did. One could suggest that this new book shows the process of learning its own history lesson by refusing to enforce any unified point of view.

Speaking of neighbours, the book has also included essays from each of Latvia’s fellow Baltic countries. The Lithuanian Edgaras Klivis offers a fresh view on the national classics of the centenary celebrations, and the Estonian Meelis Oidsalu suggests—impossible to say how seriously—that theatrical dramatizations offer a handy way of getting to know literary masterpieces since no one has the time to actually read them.

Inviting foreign contributors certainly indicates that the days of nagging national self-doubt are themselves history. For anyone wishing a look from even further outside, there is also Jeff Johnson’s 2007 volume New Theatre of the Baltics which covers all three Baltic countries and which says it is following a progress “from Soviet to Western influence.”

Western influence is, of course, a prime virtue particularly from a Western point of view. A truly independent nation might not want to publish its national achievements in English, Soviet Russian, or indeed in any foreign language. In addition, there is the question of identity politics—whose story gets heard on national stages and who may portray it? In this area, the new book lags behind in such things as coverage of LGBTQ issues.

Another concern here—photo captions throughout are not contextualized with most offering little real informational value. They seem more to be just colourful spots in the layout, like choreographers who are used as directorial illustrators, a point made by the six female choreographers interviewed here. That said, six of the seven directors interviewed in the volume are men. One might note as well that the volume lacks a full index of names and play titles.

But these are minor quarrels. The new volume does end up as a useful mix of interviews, learned articles and personal essays even though some seem like near-confessions. All thirteen writers certainly display their individual styles though none too outlandishly.

Let me end by saying that I would have liked to have seen one more essay in the volume—Lauma Mellēna-Bartkeviča’s own 2019 essay for Critical Stages—“Latvian Theatre Today: Winds of Change” which clearly outlined the economic situation of Latvian theatre during this period. It would have been a valuable addition.

*Matti Linnavuori edits the Performance Reviews section for Critical Stages. He wrote theatre criticism between 1978 and 2013 for various newspapers and weeklies in his native Finland. In 1985, he worked for the BBC World Service in London. Since 1998, he has presented papers at numerous IATC events. In the 2000s, he wrote for Teatra Vestnesis in Latvia. Since 1993, he has written and directed several radio plays for YLE the Finnish Broadcasting Company. His latest stage play Ta mig till er ledare (Take me to your leader, 2016) played at the Lilla Teatern in Helsinki.