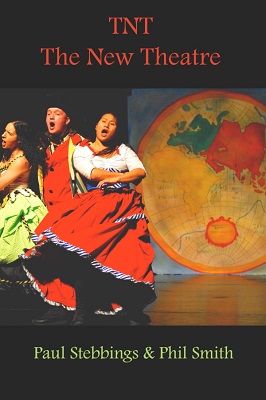 There are two ways to approach TNT: The New Theatre, a handsome new publication from U.K. publisher Triarchy Press. You can start from the book, or approach TNT from outside sources. The book’s cover tells us that TNT has been “the world’s best kept theatre secret for nearly forty years,” going on to claim that their Taming of the Shrew “has become the most performed Shakespeare production in Mandarin in the last decade,” while “almost every adult under 45 in Germany has seen a TNT production.”

Strong claims indeed, which you might hope to find explained in facts and figures in the book. However, it lacks anything as formal as a chronology of productions, let alone an index. You can get a more detailed idea of those productions from the company’s website, which also offers more on their use of music, an important component of their productions.

When I tried to find the company in the archive of Theatre Record, which has been going as long as TNT, nothing emerged until I put in the names of the authors. It turned out that in 1991, Gorbi and the Dragon was reviewed by most of the major London critics. They were very unkind.

In 1995, Time Out and What’s On reviewed Harlequin much more favourably. It was a revival of TNT’s first production in 1980, apparently performed by the Essentially Theatre Company. Since then, nothing; although there will doubtless have been reviews of its touring beyond London.

It is much better, therefore, to approach the book on its own terms, usefully spelt out in a preliminary page entitled “How to Read This Book”: “The story of TNT is not to be told in an entirely straight line. Instead, our history is told in the uneven and sometimes tumultuous stories of its productions, its countries and its ideas.”

Paul Stebbings, the company’s actor-director and administrator, met Phil Smith, its dramaturg, when they were both students at Bristol University. There they were influenced by the charismatic tutor Ted Braun, author of seminal works on Vsevolod Meyerhold. Their own devotion to the theories of Stanislavski’s wayward pupil shines through all the company’s subsequent work in its 40-year history, with a sprinkling of Grotowski, with whom Stebbings briefly studied. (It is worth reading their biographies at the back of the book before plunging into its heady mix of opinion, instruction, anecdote and travelogue.)

The company they founded was able to survive for some years in the warmth of Arts Council support at a time when small regional fringe companies could tour the U.K.’s flourishing network of Arts Centres, and even be seen abroad. The move to real financial security came in 1993, when they moved their base to Munich under the shelter of American Drama Group Europe. A more straightforward history of the company, to 2017, appears on the ADG website.

Picking your way through the duo’s varied contributions to the book, it is possible to follow the progress of both the company and its leaders. The Munich connection made it possible to develop extensive touring throughout Europe, with an emphasis on young audiences. Producers from outside Europe began to take an interest in TNT, and their demands led to an expansion from the Meyerhold-inspired grotesquerie of their early, original productions, applying it to existing plays from Pygmalion to Death of a Salesman, while continuing to address current issues (race, gender, climate change) in their own house style.

In 2001, Stebbings began to direct Shakespeare. He also began to receive invitations to direct local companies, be it in German, Spanish and even Mandarin. When COVID brought a halt to TNT’s activities, it meant the cancellation of a number of tours, among them the Castle tour, which brings Shakespeare to a circuit of fifty castles in Britain and Europe.

“We travel with two vehicles: one van with the cast and costumes, the other a ten-ton truck in which we load a theatre. The truck holds a full stage with adjustable legs to suit any surface; screens and steps, two lighting structures, a sound system including directional microphones, five hundred chairs and a box of rain capes.” (Hidden away in the book’s epilogue is the news that the company plays to “some 120,000 people every year in over 30 countries”).

Some of the book’s most valuable content arises from the authors’ forty years of acquaintance with the theatre scene in so many parts of the world. Regular chapters use personal anecdote to examine how theatre works in places as different as China, Costa Rica, France, Iran, Israel and Russia, with particular emphasis on the audience.

The book is mercifully free from self-promotion or self-congratulation. One especially touching sub-chapter, entitled “Failure,” is an honest examination of productions or tours that did not work. It includes some of the company’s bad reviews and provides the answer to the drubbing given to Gorbi’s Dragon in London in 1991: “Although we called our new production Gorbi and the Dragon it was neither about Gorbachev nor (Stalinist) dragons. It was just a mess. Our bad fortune was to present it at a London press night after some small success in Germany persuaded us that it was worth a shot. If only we had performed Harlequin to the same critics; but we didn’t and were savaged.” (The production suffered a worse fate on its subsequent tour, in an obscure town in the Ukraine, where the company were literally run out of town).

There is also a short discussion of the value of critics. “There was a time when we were very dependent on critics. The mostly loyal support of the Guardian newspaper (and its regional critics) in the UK was essential to our early success, as were our early reviews in Germany’s Suddeutsche Zeitung. . . . We soon worked out that good reviews in one country could be trumpeted in another while a poor review could be buried without much fuss.”

Finally, Mr Stebbings has a proposal that may not appeal to readers of Critical Stages: “A thought: theatre critics emerged just as the theatre audience was plunged into darkness. Before that the actors looked their audience in the eye. They did not need someone else to tell them how well or badly they had performed. Turn the house lights on.”

*Ian Herbert, a Vice President of the Society for Theatre Research, is a former President of the International Association of Theatre Critics and founding editor of London Theatre Record, now Theatre Record. His articles have appeared in numerous theatre journals. As IATC’s Director of Training he learned about theatre criticism in seminars with young critics from all over the world.