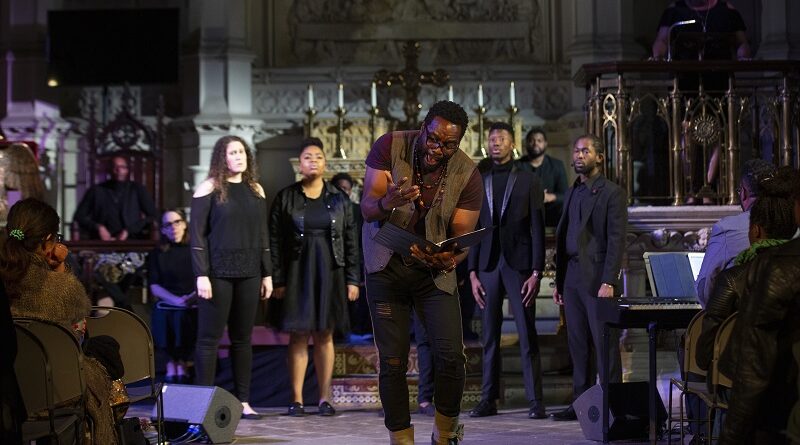 Led by Bryan Doerries as its Artistic Director, Theater of War presents dramatic readings of classic and contemporary plays followed by discussions on themes highlighted in them. Audience, performers and invited guests (panelists) share their perspectives and their experiences live. The team, since its founding in 2009, and until the pandemic hit, has travelled all around the globe and performed in innovative ways in different venues. The plays are performed with the participation of established actors and/or new actors, as well as non-actors who are part in some way of the theme under discussion.

The audience gradually becomes the protagonist in these events and has a voice that speaks in the reactions to the extracts read. The outbreak of COVID-19 did not stop these communal gatherings from happening. The company continues to perform, online, with post-streaming discussions.

My most memorable experience of the company’s live performances was Antigone in Ferguson, in November 2018, performed with live choral music by a diverse choir, which included police officers, activists, young people, teachers and citizens of Ferguson. It was conceived after the death, in 2014, of Michael Brown, an 18-year-old black man, who was shot by a 28-year-old white Ferguson police officer. The play was performed in a live music venue in Bushwick, Brooklyn. As I walked down the road to the venue and entered the dark corridor that led to the Hall, I did not expect I would find myself in the company of new friends and that I would be singing along with dozens of citizens and the Choir, the police force and educators. As I left, the wind was blowing strongly, a sign of fearful things to come, and as I waited for the bus alone, in an unknown neighbourhood, I felt unprotected, like that young kid, but uplifted by the experience.

I was eager to see the online version of this show in May 2020. The song’s lyrics were still in my head: “Love is good, love makes you mad. Love is fleeting, love is sad. Love is ancient, transcending time. Love is patient, love is kind.” Family bonds are the bonds that keep us together. The cast was different, but still with the participation of well-known actors and non-actor performers. It took less time than the live performance, where the choir kept singing and singing, drawn by the intense engagement of the live audience, though there was also something immensely powerful in the online performance. The ability to connect with people from all over the world made the post-streaming discussion longer, full of different perspectives and very emotional. Audience members talked about how this play reminded them of injustices that had caused their family members to die, about racism, police brutality and oppression.

The director makes the text the focus of the play, as a way of sharing the ancient world’s truths and perspectives. He is presenting the play with songs, performed live from a choir on Zoom, with each choir member joining in from home along with the actors, risking a not-so-polished sound and image in order to present the words “in the moment,” in isolation and with shared vulnerability.

Oscar Isaac was grounded and kept a steady tone and volume in his voice that gave him the status of Creon, only to become intense during the time of his remorse. Tracie Thoms as Antigone was captivating, especially during her last monologue, where you could clearly feel her pain at her brother’s death. Willie Woodmore as Tiresias was using the tone and complexion of his voice, elongating words in a masterful way that gave them a sense of them being warnings.

The Oedipus Project, the second online show I watched, was based on Sophocles’ Oedipus the King, and sparked lively conversations on the pandemic. Interestingly, the play was written and first performed at a time when a plague had killed almost one-third of the Athenian population. An arrogant leader, a prophecy overlooked, a plague, are some of its themes.

The actors performing joined on Zoom from their homes in New York, New Jersey, Chicago, Massachusetts, Florida and California, and handled their makeup and lighting on their own. They showed only their faces in close-up, turning their cameras on and off as needed. No tricks were used to impress the audience, just the pure, raw, strong language of Sophocles and each actor’s personal truth. Even the technical glitches, with all the windows visible when people from different locations performed on one screen, helped remind us of the isolation and lack of connection that people are facing during this pandemic. We are all equal in the face of these troublesome events, whether we are popular or not.

The isolation and darkness of Oedipus’ character was delivered successfully as Oscar Isaac, wearing a black t-shirt, handled his own lighting. He made his room go darker and darker, reaching pitch black at the moment of his blindness. The reflection from the glasses of the blind Teiresias (Jeffrey Wright) stressed the meaning of his role. The fact that the performance gave the audience no access between gallery and speaker view, and the fact that you had no access to see or talk to other audience members watching, evoked the theme of fate, a theme frequently used in ancient Greek plays. There was only the function of “raise hand” available for the discussion at the end.

The suffering of the characters reminded us of the suffering of black communities, of immigrants, of front-line workers and more, long before the pandemic. Were we too blind to see? The panel discussion was disturbing. A representative from the Asian American federation talked about Oedipus’ opening speech and the similarities with the way Asian people are treated in the U.S. during the pandemic. An emergency physician took the floor, talking about the fact that you can only see masked patients’ eyes when you talk to them, which he linked to the blindness of Oedipus. He also talked about a fellow co-worker who, not being able to face the situation, committed suicide—similar to the suffering Jocasta’s (Francis McDormand) end in the play.

During troublesome times, the Arts can still connect us and unite us. By sharing our stories with the world, they become everyone’s. My experience with Theater of War and the classic plays proves just that. And the most exciting part about it is that there is a way for these plays to be performed online, having their messages delivered just as clearly. Unquestionably, these plays are more relevant than ever and act in a healing way on the audience’s soul.

*Angela Constantinidou, born and raised in Cyprus, has been an architect for more than 10 years, with a focus in conservation. She was the co-coordinator of the European Heritage Days, where she travelled the world participating in seminars on culture and heritage. She has a B.S.A and an M.Arch in Architecture Engineering as well as an M.A. in Theatre (Acting and Directing). She is a graduate of the Neighbourhood Playhouse School of Theatre and the Manhattan School of Comedy (Stand Up Comedy) in the U.S. She is currently studying at the Atlantic Acting School in New York.