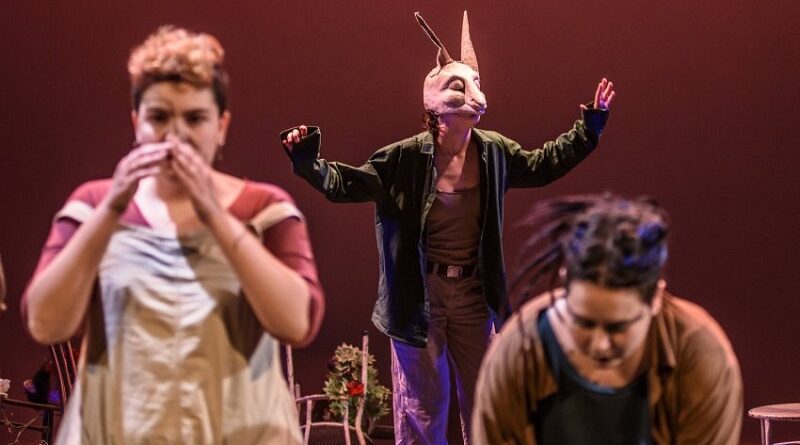 The article looks into the cultural politics of the Young People’s Stage of the National Theatre of Greece (2017–20) and examines the various initiatives of the institution that reinvigorate theatre for young audiences in Greece. Its focus is the social engagement and the pedagogical aspect that is initiated by the Young People’s Stage which breathes new life into the incorporation of theatre education in Greek society, strengthens children’s agency and connects with global sociopolitical aspects.
Keywords: theatre for young audiences, national theatre, cultural politics, pedagogy, agency

Introduction: Towards a Socially Engaged ΤΥΑ

The Young People’s Stage (YPS) is a newly founded branch of the National Theatre of Greece. Established in 2017, it focuses solely on Theatre for Young Audiences (TYA). This innovative institution (called, in Greek, “Mikro Ethniko”) organizes theatrical and pedagogical programs that promote TYA as a socially active cultural movement. The organization’s focus is both educational and artistic. The institutional politics of YPS promote a diverse repertoire, the education of young immigrants, making connections with economically and socially vulnerable groups of young people, the use of devised theatre, pedagogical collaboration with under-resourced schools and the operation of theatre workshops for children and youth. The supervisor of the YPS is Sofia Vgenopoulou, an experienced stage director and leader of the TYA theatre troupe “Grasshopper.”

In this essay, I look into the various initiatives of the institution in order to showcase the cultural politics and pedagogical paradigms it is seeking to implement. These include inclusiveness, critical thinking and aesthetic education, as well as social awareness. Specifically, creating performances for children that address multiculturalism, personal identity and globalization, YPS has reframed TYA as a vehicle of critical discourse for children. This vital creative viewpoint has also transfigured theatre criticism for Young Audiences. That is, there has been a gradual overturning of the dominant paradigm of criticism authored by adults in enclosed theatre space to the idea of self-criticism voiced by children through the experience of what is urgent to them in the wider sociopolitical connotations of society.

YPS aspires to turn theatre for children and youth into a vibrant cultural movement that connects them to diverse parts of Greek society rather than perceiving such theatre simply as an artistic phenomenon that is made by adults for children. The director of the organization has herself clearly stressed this unique aspect of the endeavor. In the past “children’s theatre” was initiated by Antigone Metaxa in the 1930s and “theatre for children” was led by Xenia Kalogeropoulou in the 1970s (Kangelari 14–22; Puchner 94–105). Now, ΤΥΑ has rapidly developed to a “theatre with, by and for children,” connected to sociopolitical and pedagogical perspectives through the initiatives of YPS.

The cultural politics of YPS reflect a cosmopolitan viewpoint. The organization tends to choose plays by established European playwrights, often from the U.K. These plays emphasize social and personal issues that energize the critical participation of the young spectators in an era of globalization. At the same time, the performances convey ideas through productions of high quality.

Among the plays performed have been The Prince and the Pauper by Mark Twain, in an adaptation by British writer Jemma; A Thousand and One Tales, in an adaptation by the well-known British TYA playwright Mike Kenny; and Wild Teen Tales, based on stories by French writer Bernard Friot. The first play showcases social injustice and abuse of power in a performance that uses musical elements and physical theatre. The second play focuses on the creative power of fantasy using images of a mythical East through live music, cartoon elements and colorful costumes. The third play looks into the connection between reality and imagination through scenes of everyday life. It should also be noted that writers such as Jemma Kennedy have also collaborated with YPS in creative writing courses.

YPS has also presented ancient Greek history through a trilogy of plays called War Lessons. Based on the writings of historians Thucydides and Xenophon they narrate events of the Peloponnesian War. Essentially pedagogical, the plays use experiential learning, narrative form, technology and contemporary costumes. In terms of social education, the trilogy strengthens the political perception of the audience, the understanding of Greek history and the connection to seminal ancient Greek texts.

YPS’s “Theatre in Greek” program is aimed at teenage refugees, especially those hosted in state facilities without their parents, as well as Greek teenagers. This initiative, started in 2017, includes a multicultural youth theatre group that is directed on stage by Sofia Vgenopoulou. These young people speak in Greek to native speakers, improvise non-verbal communication, explore vital political aspects connected to statelessness and become accustomed to the codes of Greek culture and life.

The program allows for the growth of diversity, social acceptance and collectivity. It is important to point out that Greek students also visit rehearsals of the group to gain some of these same perspectives—social engagement and overcoming stereotypes. Supported by UNICEF and funded by the Directorate-General for European Civil Protection and Humanitarian Aid Operations, the program has already offered theatre education to some 500 refugees and produced two important performances.

The first one, The Journey, focuses on the theme of homeland, belonging and solidarity. Over 5,000 people, mostly from schools and theatre groups, attended the performance, which was also well-received by the critics who stressed, for example, the humanism of the performance (Ioannidis). Such performances give rise to many important ideas and promote a dialectics of “critical uncertainties” (Patsalidis 68).

The second performance, titled Woman in 6 scenes and 1088 words, looks into the process of female adulthood. Sixteen girls wander the woods of adolescence, much like the Red Riding Hood, facing the big bad wolf of fear and love.

Another social initiative is the program “Will you take me to theatre?” which invites the public to buy tickets for children with health issues, without parents, or living in secluded areas so that they too can experience theatre.

YPS also promotes youth agency through devised theatre, where teenagers create their own plays to shed light on personal problems and social concerns. In 2019, the organization presented eight such plays. In the Elevator intertwined techniques of silent cinema and slapstick comedy. In Not Even the Rain Has Such Small Hands, the arc of the play was based on elements from the Glass Menagerie by Tennessee Williams, in I am an Animal! Socked? human nature was depicted through animal masks. Lastly, in Don Juan, the Teenager, the well-known character created by Tirso de Molina showcased the theme of acceptance. YPS’s devised theatre encourages teenagers to voice their concerns and become part of social discourse.

“Theatre at the New School”

The “Theatre at the New School” is a program that offers theatre to Greek secondary schools. Funded by the European Union, teachers, students and artists from the National Theatre collaborate in a socially engaged process that promotes theatre as education rather than as an artistic event.

The initiative starts with the training of teachers who then create a theatre group in each school ending with the presentation of the performance at the school. Performances center around friendship, rejection, body issues and relationships with parents. During the COVID-19 pandemic, the work was done mostly via Zoom, allowing teenagers to create short films about the lockdown. Lastly, an autonomous Academy for schoolteachers was added to the program in order to promote the creative implementation of pedagogical theatre tools in secondary education.

A second pedagogical initiative of YPS has been the creation of creativity workshops for children and teenagers. Organized into separate age groups, children aged 3 to 4 are transformed into superheroes and animals, play with dolls and marionettes and develop symbolic thinking through sensory-centric actions and physical experience. Those aged 4 to 8 focus on speech and create stories using roleplay, mime and psycho-kinetic games in order to develop their imaginations. Those aged 8 to 11 deal with aspects of identity through theatre games.

These groups also expose children to the multifaceted cultural tradition of Europe. Poetry, painting and architecture all come into play with Impressionism, Surrealism and Modernism the primary sources of inspiration. Among the models are Van Gogh, Miró, Matisse, Dali, Gaudi, the Bauhaus and Greek poets and painters, such as Odysseas Elytis and Nikos Egonopoulos.

Workshops for teenagers focus more on acting and creating short plays based on personal ideas and experimenting with musical theatre.  Those from 15 to 18 explore career choices through the study of plays like Aristophanes’ Clouds. Finally, young people aged 16 to 20 learn about ancient Greek drama, the stage dynamic of the chorus and tragic heroes, while testing out the possibilities of physical theatre and exploring the theme of love.

The programs of YPS have pushed forward a series of cultural and social policies that are re-textualizing the importance and function of TYA in Greece. Specifically, the programs have succeeded in developing children’s understanding of theatre, engaging children in a globalized multicultural society through theatre and connecting education and theatre.

Strengthening of personal agency and encouraging ideas of diversity through theatre have become a means of effectively engaging both social dialectics and personal expression. The role of children as passive viewers has started to transform into a pro-action one.

TYA is taking a giant step from being taken for granted to becoming an important part of the national theatrical establishment. It also promotes vital transitions that have incorporated during recent years the participation of children (Dimaki-Zora 273; Grammatas 445). Through these recent developments, YPS becomes a means of theatre education and social awareness and opens new horizons for young people.

Grammatas, Thodoros, editor. At the Land of No-Now: Theatre for Young Audiences. Patakis, 2010. (Originally in Greek.)

Kangelari, Dio. “From ʻChildren’s Theatreʼ in the 30s to ʻTheatre for Childrenʼ in the 70s.” Τheatre for Children: A Practical Guide, edited by Xenia Kalogeropoulou and Dio Kaggelari, Greek Theatre Center for Children and Youth, 1999, pp. 14–22. (Originally in Greek.)

McCallin, Nellie. “Seeking the Aesthetic in Creative Drama and Theatre for Young Audiences.” The Journal of Aesthetic Education, vol. 39, no. 4, Winter 2005, pp. 12–19.

Vgenopoulou, Sofia. “Theatre for Young Adults is a Movement. It Is Something You Are Dedicated to as a Co-creator.” Paidiko Theatro, 24 Aug. 2020. (Originally in Greek.)