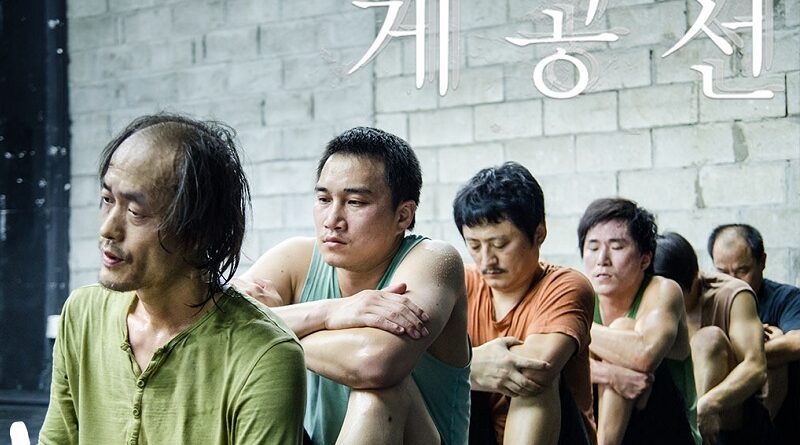 For nearly 20 years as the leader of Dong Theatre Company, Kang Ryang-won has been a director of performances in which the audience are expected to find their own meaning. He majored in Theology in Korea and studied directing at the Vakhtangov Theatre Shchukin Theatre Institute, Russia. He mainly creates texts from segmented pieces of the actor’s physical acts and works with his actors to make up their own text.

He started performing in Korea with Phèdre, The Maids and adaptations of novels such as Gogol’s The Overcoat, Kafka’s Metamorphosis, Émile Zola’s Thérèse Raquin and William Faulkner’s As I Lay Dying, developing his own writing and acting methods. Since the sinking, in 2014, of the Sewol Ferry, he has presented works which allow to look at issues in Korean society. Among them, he performed Crab Factory Ship in Japan and Secret Police, Invisible Man, Waning Crescent, Or the Way You Remember The World in Moscow and Korea. In the last seven years, he has won a number of major theatre awards, which have put him in the spotlight of both the local and  the international theatre community.

Immediately after returning from Russia, you founded Dong Theatre Company and started to perform at Theatre Dong, in the Hongdae area, in 1999. Back then, your artistic choices were unique and hard to comprehend. What were your special intentions in such choices, and what do you think when you look back on them today?

It was the beginning of my present directing and theatre language. Rather than performing predictable dramas, I tried to have my actors meet and respond to “counterparts”[1] physically, within the boundaries of theatre and non-theatre. I wanted to turn all texts into pieces offering characters as counterparts to be met by actors and make each piece an independent symbol.

I focus more on the materiality of words such as the sound of speech, the color and strength of words. I try to place them next to the body without absorbing them into it. So, if the words are soft, the body acts strongly, and if the words are strong, the body acts softly. I try not to match words with actions. I like to have my actors talk with different rhythms and tempo using their body. This delays the interpretation as long as possible.

You remind me of the idea of the “Grotesque” described in Meyerhold’s theatre method—the effect of “unfamiliarization” created by connecting disparate elements. While studying in Russia, you, of course, met with Stanislavski’s acting training and his interest in the physical body. The training and use of the body have since been developed by Vakhtangov, Meyerhold and Grotowski in theatre. Could you compare your training methods with those masters’ mentioned above?

The Vakhtangov Theatre Institute, where I studied, has moved on from Stanislavski very creatively. That is where I learned to focus on “counterpart.” When an actor concentrates on the counterpart, his body opens up and extends to the counterpart, to the whole world he encounters. I am not interested in conflicts between characters, but in showing changes and creations in one’s own world. For example, in Waning Crescent, Or the Way You Remember the World, I wanted my actor to concentrate on a single person, to look at the world of the murderer and show the universe at the moment when the murderer throws himself on to the knife of the mother of the recently murdered child. I do not think an actor goes into action by thinking of the purpose, the reason and who the character is, but by his behavior on stage and a combination of those movements. Towards the end of his life, Stanislavski became interested in the present being, and he ultimately wanted the actor to act as himself. During my study in Russia, those who believed that Stanislavski’s main concern was the story and the given circumstances told me this was not Stanislavski. I got along better with theatrical people who were studying Meyerhold and Vakhtangov, thinking they understood Stanislavski better.

I agree that the whole world surrounding us, including the counterpart, is always undergoing organic change and creation, communicating with us at various levels. By the way, your 2012 Secret Police used not only the actor’s body, but also various versions of the performance to differentiate it from other works, adding overwhelming audio-visual effects. You used Korean traditional art, including live gugak performance and Korean traditional puppetry, for your theatrical spectacle. Can you explain the direction, intention and effect, compared to your previous works?

Secret Police was mostly inspired by Meyerhold’s version of Gogol’s The Inspector. Just as Meyerhold discovered that theatre was the most immediate way to communicate with the public, I created the spectacle of “theatricalism”[2] through using the traditional Namsadang play.

What matters to me on the stage is always about actors’ meeting the counterpart; I wanted to produce not only naturalist works like Thérèse Raquin, but also Meyerhold-type works such as Secret Police. While sticking to the reality of the original play, I tried to expose how the influx of Western culture has unbalanced Korean culture: so, American musical hits were heard through speakers, as traditional Korean instruments were performing. Also, while the main character, the Inspector, did not appear, I tried to show that the censorship—which breaks in and pretends to be the master, not an outsider—was equivalent to the Inspector. I also tried to communicate with the audience physically and sensually, surprising them before they even thought about it. This may have given the audience more immediate “pleasure.”

With your original novel adaptations, you have become one of the leading directors of the Korean theatre. Why are you particularly interested in staging novels?

I like novels about a single person or world because I want to create a person or worldview rather than the story or conflict of the characters. It is relatively easy to find these in novels, and since it has to be restructured into physical movements, I am trying to find my next works in novels where free adaptation is possible.

What matters to me and my actors is meeting the world of characters, not defining what kind of world it is. It may be difficult to reach the character’s world, but I wanted to demonstrate the process of approaching it.

You held your Monday Acting Classes, too, for nearly 10 years. What activities went on there?

At first, we named the role that the actor should meet as “target.” After that, we changed it to “counterpart.” Compared to target, I think there is more power when the counterpart approaches me than when I approach it.[3] We are interested in “what counterparts are made up of.” At first, we started with “acting on stage,” now we are interested in “what power counterparts have to do that.” By studying with the actors for 10 years, we seem to have reached the conclusion that “the world, including myself, is what makes me move.” Then, I discover that I do not exist anymore. I now exist only in combination with the counterpart that has approached me. Every moment of being combined here and there makes me who I am. Now the body is not the one under my skin. Instead, we can refer to the body as the extended counterpart I meet. Apart from acting, we have recently been studying problems of Korean society. Since 2015’s Crab Factory Ship, which might remind us of the recent sinking of the Sewol Ferry, I have started to deal with more social issues in my work.

The work you pursue and the way you do it seems to be a handcrafted work. When you are sitting in the audience watching a play on stage, who is this figure present on that stage? Is it the same person you have been working together with for 10, even 20 years?

This is a different text. He is creating his own text. The text is based on the senses, but it is still a text. I agree when you say that my work is handcrafted. I take a long time in preparing for a play. When I choose a play, I start with adaptations. I work with the actors to make adaptations or research in order to pull them into the work. I do not think there’s an objective interpretation of a play: rehearsal continues until the actor has his own interpretation. When I am charmed by him, that is when I present the show.

To be charmed means that I am combined with him, which will mesmerize the audience too. I want to know about the world the actor encountered that will become a part of him. I cannot say that this is such and such a world, but I want to know and meet the world which exists. Moreover, I am mostly interested in what people lack, if they are poor in mind as well as in material goods. I want to see what leads them to seek out value in their own life.

What kind of experience do you want to give the audience when they leave the theatre?

Since COVID-19, mankind has entered a new era of crisis. Many performances have been canceled or postponed. I would like to know your future plans.

Recently, I have been making one-man plays. I wanted to see how one’s body can turn into another person when talking about him. We are making a one-man play for Macbeth, to experiment with how much of Lady Macbeth, Duncan and Macduff can fit inside Macbeth; a kind of experiment to deconstruct and reconstruct the subject. However, I feel as if our preparations before COVID-19 seem anachronistic now. We were preparing two new plays this year and one revival. One of them was canceled and one was postponed until early next year. We decided to replace the revival with a video transmission. As video transmission becomes more common, people will long more for direct contact. By then, there may be a natural way to adapt—the awareness that all life is connected.

[1] Originally, the director and his group named the role that the actor should act, as “target.” Later on, they changed it to “counterpart.” They thought the word “counterpart” was more appropriate: it “approaches” them more actively than the target which tends to wait to be approached by them.

[2] Encyclopaedia Britannica defines the concept of “theatricalism” as: “General movement away from the dominant turn-of-the century techniques of naturalism in acting, staging, and playwriting. It was especially directed against the illusion of reality that was the highest achievement of the naturalist theatre.”

[3] The director, while working with his actors, is here introducing the method of acting they found out while practicing together.

*Lee Hwawon, a board member of Korean Association of Theatre Critics, teaches theatre history, drama analysis and acting theory at the Department of Theatre Arts, Sangmyung University, Korea. Author of Toward a New Reading of Jean Racine’s Tragedies (2010), she has published her translation of Molière’s Selected Comedies (2004) and is about to publish a collection of her critical essays and research papers written over more than 20 years, Reading the World Through Theatre (2020). She graduated from Seoul National University with an MA and obtained her PhD from University of Minnesota, U.S., with her dissertation, “La Représentation et au-delà: les tragédies de Jean Racine.” She has been leading a social enterprise, Center for the Arts Beyond Boundaries, seeking innovative art forms to share with the broader public across different countries and touring with her productions, Pianoforte, ma vie and La Lune en Papier, which go beyond the boundaries of genre, language and border.