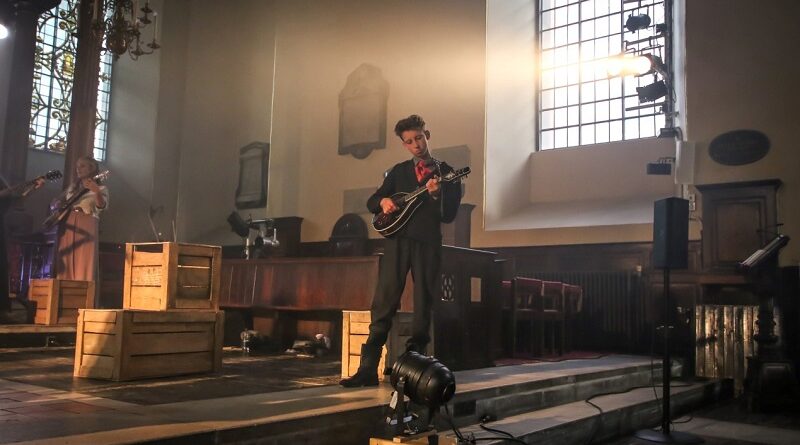 Migrants in Theatre is a movement made up of first-generation migrant theatre artists who joined efforts to campaign for more and better representation of UK based migrant theatre artists in British theatre. Due to the coronavirus pandemic, the movement was able to garner momentum that has initiated change in the industry for when theatres reopen in the U.K.
Keywords:  migrant, theatre, coronavirus, representation, British

Migrants in Theatre is a movement spurred by a collective of theatre makers who have migrated to the United Kingdom. We are at various stages of our careers, span different towns and cities, work in different areas of the theatre and come from all over the world. Begun as a conversation between friends, MiT has grown into a movement amid the coronavirus pandemic.

COVID-19 affected migrants differently than non-migrants: migrants are, generally speaking, less able to participate in government schemes put in place to assist British residents financially during the pandemic. A sense of community became confusing for many. And the feelings that have struck everyone during this time have affected migrants with different nuance and at different levels. As such, this movement became a beacon for us to gather in solidarity, to uplift each other and to advocate change.

The United Kingdom has long been reputed for its arts and culture, and especially its fine tradition of theatre. In normal years, tens of millions of tourists pass through to visit famous sites, grab a pint at the pub and bask in the magic of attending the theatre. That is what brought me to this country. The theatre. The theatre! It truly is extraordinary.

There are approximately 200,000 freelancers in the theatre industry in the U.K. If 14% of the U.K. is made up of first-generation migrants, that means we could reasonably estimate that there are as much as 28,000 migrant theatre freelancers.

Often, theatre work by migrants living in the U.K. is mishandled, poorly understood or otherwise “othered” within our industry. As practitioners bring elements from abroad, contrary to established British aesthetics, the work may be seen as too bold, too risky, too abstract or, paradoxically, not foreign enough, not stereotyped enough, not fitting-some-intangible-mould enough …

Audience and industry expectations are very much the result of an intersection between Britain’s colonial past and its contemporary political landscape. Colonial and xenophobic attitudes, heightened in recent years due to government policy and media coverage, create bias against anything “foreign.” Theatre created by international artists is at best exoticised, manifesting in the form of hiring companies from outside the U.K. to present their art for short engagements—brought in as items of curiosity and fleeting exchange. The work of migrants living in this country is very often relegated to the shadowy corners of the fringe sector, and the structures and histories that led to these migrants coming to the U.K. remain largely unexamined.

However, if we look at the demographics, we see that our theatre is contemporary British theatre. Migrants form a substantial part of British society and add to the richness of Britain’s culture. However, that richness is near-absent in the makeup of theatre representation, artistic work, programming and support. That is what Migrants in Theatres (MiT) aims to change.

Working as a theatre artist in this country comes with its fair share of obstacles and barriers. Working as a migrant: the same, compounded by the hostile environment policy spearheaded by ex-Home Secretary Theresa May. Combine the two, and you find a painful intersection of profound creative expression, lived experience, culture, language . . . mixed with frustration, financial and emotional challenges, and a near-total absence of awareness and understanding about first-generation migrant challenges. It was out of this creative fire and discontent that Migrants in Theatre emerged.

What started as conversations around a coffee table (and thanks to the space lockdown created for people to reflect, reach out and gather virtually) has grown to a wave-making initiative to change the way migrants are viewed, integrated, celebrated, and hired in the theatre industry in the U.K.

Due to the popularity and ease of online platforms that sprung up in the wake of the coronavirus pandemic, facilitating conversations between larger groups of people across the country became easier. MiT had two foundational turning points: the first, an open survey disseminated to migrant theatre workers living in the U.K. This survey collected information on Migrants’ experiences within the industry, expectations, demands and dreams, with most people reporting discrimination, unconscious bias, stereotyping and a general feeling of invisibility.

Secondly, MiT arranged informal monthly meetups that provided much-needed solace and solidarity for the migrant theatre community. Not only were we all recognising the systemic issues within the theatre industry: we also had to contend with, for instance, some very real discrepancies between the government support offered in response to COVID-19 and a rapidly approaching, ever-unclear Brexit. These meetings provided hope and inspiration, allowing people a place of refuge and profound understanding.

What began as connection quickly grew into brainstorming and action. Within just three months, we had hundreds of supporters, and the monthly meetings began to unpack and redefine terms like “migrant” and “international artist.” We began to respond in teams and breakout rooms to provocations inspired by the survey and relevant industry topics like freelancer advocacy. In this way, the core members assembled topics and action points for a Town Hall: an open meeting for migrants and allies to speak to the artistic directors of a few reputable companies in the hopes of invoking and catalysing change.

With the help of Anthony Simpson-Pike, a migrant theatre director, we organised the London Town Hall as a Zoom meeting which consisted of a presentation, a chance for artistic directors to respond, and a Q&A open to all participants. The presentation included a description of our movement, defining the term migrant as well as our intersections and support of sister social justice causes, sharing our survey results, describing what migrant theatre makers have to offer the greater theatre community and elaborating clear action points that the artistic directors in attendance, and hopefully others, would take onboard. Alongside this, we shared what we call the Foundation Document, which describes much of the above in clear detail.

The London Town Hall was an affirmative moment, full of solidarity. We had nearly 200 participants in attendance, and seven companies whom we had invited to speak with us through this public forum. These companies participated as key industry players, hearing our assertions, evidence, stories, anecdotes and questions. One of the most striking qualities of the meeting was the sound of many different voices in the digital space.

In Britain, the sound of one’s voice can be a synecdoche of identity in ways that are isolating, at best, and disqualify you from getting jobs, at worst. This is true for some British accents, despite the fact that there exist approximately 40 different native accents across the U.K. Foreign accents, therefore, become incredible barriers for theatrical careers. Hearing all the different voices in the room sharing insightful comments and heartfelt testimonies spoke to the reality of what this country authentically sounds like and truly invigorated the atmosphere and the arguments. Moreover, the seven companies responded with thoughtfulness and open minds, demonstrating a willingness to work with us on next steps so that we may begin the long process of decolonising these spaces and building support structures to nurture migrant artists as part of the U.K. theatre ecosystem.

Migrants in Theatre is now in its follow-through phase, working with companies to begin taking concrete strides toward change. We are planning town halls in other parts of the U.K., beginning in the Midlands and Scotland. We are extending a hand to industry players who are in positions of power to become allies in building a more inclusive and diverse theatrical sector.

We know that we face many trials ahead, with Brexit, the coronavirus pandemic: the most recent challenges sowing uncertainty in migrant artists’ lives. We know that meaningful, structural change takes time, and the work is done through small actions that are possible to take now. As the political and public health situation continues to shift, we continue to walk forward as advocates of this movement. As migrants, we fight for change toward a more welcoming and inclusive environment. We question power structures of the past, interrogate identity and borders. We know language and transcend language. We embody resilience.

As theatre makers, we do the same.

Want to find out more about us? Working or residing in the U.K. and want to join? Email migrants.theatre@gmail.com or follow us on Twitter at @MigrantsTheatre.

*Sally Beck Wippman is a freelance director and movement designer living and working in the U.K. and internationally. She specialises in physical theatre, new work, musicals and Shakespeare. Her directing, movement and other work as a theatre artist has taken her from Chicago to Ireland, Italy, Russia, Indonesia and Britain. Sally seeks stories that are consciously political in nature, challenging our current society head on. She has an insatiable desire to learn about other cultures and explore the ways in which we are all connected; that curiosity and interrogation influences her vision and approach to working in the arts. She studied at Atelier Teatro Fisico in Turin, Italy, and holds a BA from Washington University in St. Louis and an MFA in Theatre Directing from East 15. www.sallyspeaks.com.

**Zhui Ning Chang (she/they) is a Malaysian theatre director, writer, editor and facilitator based in London. She works across performing arts and publishing, specialising in intercultural performance, multilingual theatre and creating work by and for underrepresented communities. Her directing work has been presented with companies in the U.K., U.S.A. and Singapore. Zhui Ning is a co-founder of the theatre collective Lazy Native, championing Southeast Asian work on international stages, and serves as Connections Producer at Global Voices Theatre. She trained on Tamasha Theatre’s Directors Programme and holds an MA Text and Performance from RADA and Birkbeck, University of London. www.zhuiningchang.com/

***Lara Parmiani was born in Italy, where she studied Dramaturgy at the University of Milan, and acting at the prestigious Accademia De’ Filodrammatici. Lara is an actor, dramaturg, director and deviser. She moved to London to work as an actor in 1997, and in 2010 founded LegalAliens Theatre, a company focused on platforming migrant artists by marrying an interest for social/political themes with new aesthetics. Her extensive acting career spans over a variety of genres from new writing to Shakespeare and physical theatre, and she has performed with companies in Italy, the U.K. and France. She has produced and performed in most of LegalAliens’ shows, including Neither Here nor There, The Return, Kill Hill, The Ineluctability of Chaos, Poker Face, Migrations Harbour Europe and Closed Lands. She has also devised and directed performances with LegalAliens’ migrant community groups, including Who Am I? in collaboration with Haringey Welcome.