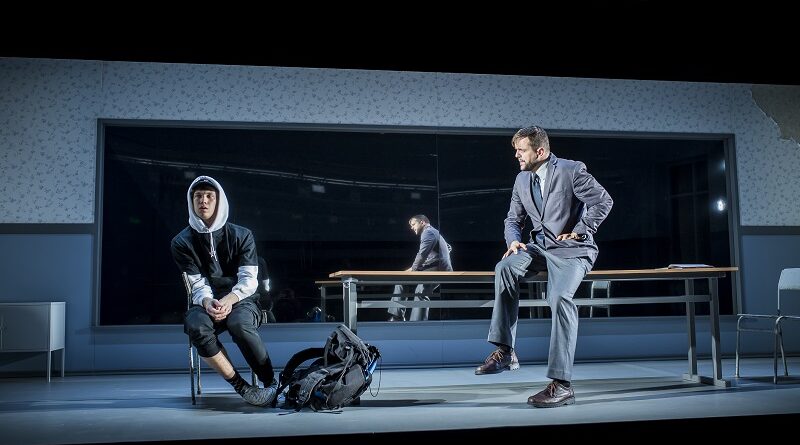 Duncan Macmillan’s Every Brilliant Thing, directed by Rēzija Kalniņa at Riga Russian Theatre and by Inese Mičule at Valmiera Theatre. At Daile Theatre, Lungs and Monster directed by Dmitrijs Petrenko.

Who is the most staged British playwright? Shakespeare? This might have been true until 2020, when Duncan Macmillan (born in 1981) beat his famous predecessor, at least on Latvian stages. The pandemic may have postponed premieres in the spring, but, currently, Latvian theatres are showing four parallel productions of Macmillan’s plays in three different theatre houses. All have been acclaimed by theatre critics and audiences.

The triumph of this contemporary British author on Latvian stages can be explained by three facts. First, English-reading Latvian stage directors choose material that resonates with the social contexts they consider relevant for today’s theatre audience; second, most of the stage directors dealing with Macmillan are aged between 35 and 40 and thus peers of the playwright; and third, chamber-style plays requiring only one or few actors are economically efficient and convenient for the present unprecedented circumstances.

Macmillan is a master of digging deep into the unconscious and showing a way of thinking and acting that is easy to identify with, at least partially. He is simple in his words and simple in his conclusion that nothing in this world is simple at all. At the same time, he abstains from pure naturalism or cheap melodrama when dealing with addiction, suicide, the twists and turns of relationships or deviant adolescent behaviour in the light of fear, self-torture and invented or real external threats.

Macmillan’s name first appeared on the Latvian theatre scene in late 2014, when the young stage director Laura Groza-Ķibere staged the dramatization by Macmillan and Robert Icke of George Orwell’s 1984 at the Liepāja Theatre. A production of People, Places and Things by Valters Sīlis, one of the leading young Latvian stage directors, followed in 2017 at the Latvian National Theatre. Neither of these was “easy” for the audience to receive, but they were thought-provoking regarding the contradictory meanings of freedom, happiness, consciousness, hope and truth in the liminal space between poisonous substances or powers and individual choices. Following those productions, in 2020 Macmillan seems to be one of the trendiest contemporary foreign authors on Latvian stages, rivalled only by his Russian colleague Ivan Vyrypaev (born in 1974), whose plays have lately attracted the attention of Latvian stage directors Regnārs Vaivars (adaptation of The Drunken Ones, Valmiera Drama Theatre, 2017), Elmārs Seņkovs (Iran Conference, pandemic-time online production, 2020) and Māra Ķimele (Euphoria, Liepāja Theatre, 2020), as well as Rolandas Atkočūnas, the Lithuanian stage director working in Latvia (Unbearably Long Embrace, Daile Theatre, 2019).

Currently, Latvian audiences can enjoy two different productions of Every Brilliant Thing (2013). One of them is staged by the actress and director Rēzija Kalniņa (born in 1970) at the Mikhail Chekhov Riga Russian Theatre under the title Little Gems of Life (Dzīves dārgakmentiņi / Драгоценные камушки жизни). This premiered on February 29, shortly before all of Europe went into lockdown. Another version, translated literally into Visas labās lietas, followed in 2017, staged by director Inese Mičule (born in 1979) at the Valmiera Theatre and premiered on May 29, as the first and therefore very emotional post-lockdown production, in front of two dozen audience members (with a simultaneous online broadcast). Both directors have respected the author’s wishes in localising the story to Latvia, in terms of context as well as maintaining the interactive form with the audience. The story tells of a little boy whose mother has tried to commit suicide, because she “finds it hard to be happy.” The boy tries to list all the brilliant things worth living for. One can say that the play is about depression and the lengths to which we would go for those we love. However, in the Latvian theatre of 2020 it encourages everyone to make such a list to survive this strange period of social distancing.

There are a few curious things about these productions in terms of their directing approach. Both focus on a laboratory of feelings, in which every single person in the audience unconsciously deals with his or her own experiences, thus contributing to the emotional climate in the relatively small hall and inevitably participating in a therapeutic ritual that confirms Macmillan’s statement: “You are not alone. You are not weird. You will get through it.” In Rēzija Kalniņa’s casting, nineteen candidates competed for the protagonist’s role. She asked them to tell one sad and one funny story about their mothers. Finally, she selected two actors, Ivan Strelcov and Anatoly Fechin, and made two different versions of the production. In Inese Mičule’s production of Every Brilliant Thing, every audience member gets a small piece of paper with a number and a few lines, or a larger part to be read out loud or even played along with the protagonist, played by Mārtiņš Meiers. Especially touching is the woman who is asked to take off her shoe and make it talk, in a role play as the dog of the boy’s psychotherapist. The participatory method gives a strange and yet touching effect that is seldom observed in today’s theatre, particularly in the case of relatively traditional state repertory theatre houses, where the “fourth wall” is too often a fundamental construction element. Sharing is caring, says the actor in Macmillan’s words, and the audience seems enchanted by their sincerity and the surprising number of little things in life worth living for, enchanted by having shared this experience with others. Unfortunately, the fourth wall of the computer screen does not result in such enchantment (as proved by personal experience), but at least it generates the desire to return to live theatre, where the joy of watching does not depend on fluctuations of Internet speed or camera angles.

On July 15, in the middle of summer, when theatres are usually closed, the Daile Theatre in Riga re-opened to audiences with the premiere of Lungs, translated into Latvian as “The Breath” and staged by director Dmitrijs Petrenko (born in 1981). Historically, the Daile Theatre was the pioneer of contemporary theatre in the twentieth century, when it was led by the legendary Latvian stage director Eduards Smiļģis. The theatre celebrates its centenary in 2020, and Lungs turns the nearly 1,000-seat large hall of the theatre into a gigantic black box, showing a couple dressed in jeans and sweaters debating the pros and cons of their hypothetical pregnancy versus concerns about the planet’s future. Paradoxically, it works, even in a half-empty hall, where due to current governmental restrictions people sit in every second row, separated by plastic walls between the seats. The actors talk and people laugh and sob in every performance.

The couple, named simply M and W in Macmillan’s text, are played by two different pairs of actors. Ieva Segliņa and Gints Andžāns, who also translated the play, represent the couple in their 30s, while their younger colleagues Anete Krasovska and Kārlis Arnolds Avots present the same story involving a man and woman in their 20s, when, naturally, the discussion of a potential descendant is more straightforward than when affected by a biological clock or social pressure.

The differences between the two casts surprisingly rehabilitate text-based theatre as a valuable form in contemporary performing arts. After the October 13 performance, one of the audience members came on to the large stage of the Daile Theatre and gave a moving speech about the emotions this kind of theatre brings to people, followed by a marriage proposal to his beloved. That unexpected event brought the whole audience to tears, leaving open the question of whether it was a planned scene or the spontaneous effect of a very well performed Macmillan play.

In the meantime, a few days earlier, the small hall of the Daile Theatre hosted the premiere of Monster, staged again by Dmitrijs Petrenko and played by almost the same team as The Breath. The minimalist production of Monster lets one appreciate the metamorphosis of Kārlis Arnolds Avots, the youngest actor at the Daile Theatre, from M in The Breath to the 15-year-old and “already broken” Darryl, an adolescent prone to violence, with all of the typical neurotic body language, aggressive yet often questioning intonations and persuasive use of slang in mixed English-Russian-Latvian adapted to the local trend. This production is not about the timely subject matter of puberty or childhood traumas shaping the future of an individual; instead, it is about the revival of psychological theatre without any annoying theatricality bordering on pretence or moralising. On the one hand, the immersive effects of Macmillan’s plays make audiences more participatory in theatre performances; on the other hand, they revive the spoken word that seemed to be losing its position in theatre to other elements of the performance. The Breath and Monster literally bring a new breath to the Daile Theatre, where the new season has been very uneasy first season for the theatre’s new managing director and actor, Juris Žagars, and new artistic director, Viesturs Kairišs.

There is a Latvian proverb that if something happens twice, it will definitely also happen a third time. I would bet that Macmillan’s 2071 (2014), about climate change and related controversies, is somewhere on the wish list of Latvian stage directors.

*Lauma Mellēna-Bartkeviča (PhD) is a Latvian music and theatre critic, as well as Head of AICT/IATC Latvian section. She works as a freelance, publishing articles, reviews and interviews on opera and theatre in the daily press and electronic media as well as in professional magazines since 2004.  She currently focuses on the development of international co-operation in theatre theory and practice in the Baltic States.