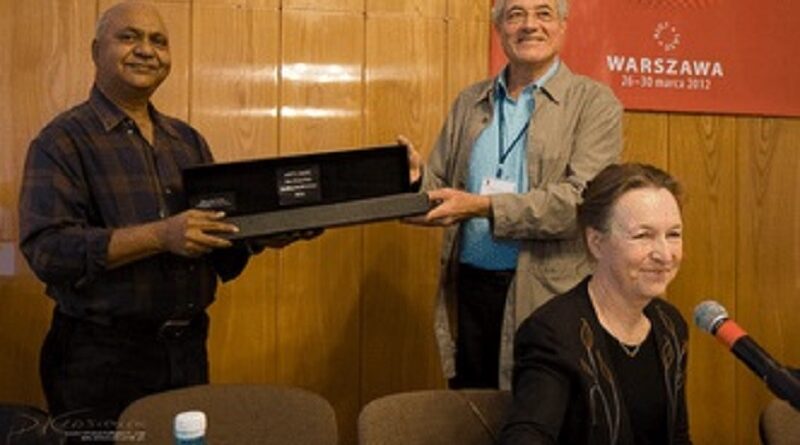 The Thalia Prize of the International Association of Theatre Critics is a fairly young award. When it was created, it was intended to be a special prize for critics, for someone who, in his or her own writings on theatre and the performing arts, has changed critical understanding in some way.

In the beginning, therefore, discussions about potential laureates quickly fell into a pattern built around major theatre thinkers, theorists and writers. All were brilliant to be sure, but all seemed to be men, and all seemed to be from the West. After several such awards, IATC realized that, to have credibility and relevance today, the prize needed to ”travel the world” and broaden its own horizons.

It also needed to mirror the fact that, in the vast landscape of contemporary theatre, women too worked as theorists as well as practitioners. So, Kapila Vatsyayan became the perfect choice for the fourth Thalia award. First, of course, in her own right, as a brilliant scholar and critic. But she was also a person from a non-Western cultural tradition, and a woman.

I first met Kapila Vatsyayan in Stockholm, in the 1980s. I was struck by her ladylike sophistication and style. She radiated Indian refinement and profound knowledge. In the 1990s, I visited Dehli and the Indira Gandhi National Centre for the Arts which she ran. She was also editor of the book program there, and their shop included one study I had written in association with the internationally acclaimed theatre and puppetry artist Michael Meschke. Mme. Vatsyayan and I spent time chatting in her modest office where piles of paper and books almost hung over us. It remains a clear picture in my mind.

Some time later, I read her writings in some depth and was immediately captured by her clarity of thought and the precise beauty of her words. As a theatre and dance critic from Scandinavia, I had often felt helpless before the vastness of Indian culture—its myriad gods, its forests of symbols and plethora of signs. I was particularly struck by something she said in the introduction to her volume Traditional Indian Theatre, Multiple Streams:

A mention of the performing arts of India immediately bring[s] to one’s mind the single-bodied and many-armed image of Durga, or Shiva in his form as Natarja, ever destroying, ever creating new forms of the dance Tandava. These symbols in plastic form suggest at one level the unified equilibrium, the still-centre, and at the other, the continual play of energy and rhythm in plural forms. The two aspects are interconnected and mutually dependent.

Mme. Vatsyayan was strict and proper, humble yet self-confident, and she always wore a warm smile. That was what those in attendance at the 2012 Thalia Award ceremony in Warsaw saw in her acceptance video. There was also a discrete and ironic twist in her words as she thanked IATC. Sadly, she was unable to accept her prize in person because, in her 80s, she had serious issues with her sight and could no longer travel. But, as we listened to her recorded acceptance speech broadcast on a big screen, all the international critics gathered there did at last get to meet her and hear her carefully balanced words.

She thanked everyone for allowing her to join the company of much-admired and internationally acclaimed theatre critics/scholars/writers who had become Thalia laureates before her—Eric Bentley, Jean-Pierre Sarrazac and Richard Schechner. She noted however that receiving the award as a dancer was especially welcome.

“More so because it would appear that whatever little I have contributed has travelled beyond the shores of India.”

Certainly, this was a subtle way to express her awareness of the many existing hierarchies—painful and long out of date—still around us even in the arts.

“I began as a dancer,” she recalled,

and even at this age I continue to be a dancer. My teachers came from all parts of India—north (Kathak), south (Bharatanatyam and Kathakali) and the east (Manipuri and Odisha). As valuable the learning was from great masters and artists from the West, I owe a deep debt to Rudolph van Laban, whom I met briefly in Manchester and imbibed his vision and approach through a long and sustained contact with his daughter Juana de Laban, who was also my teacher.

As well, there was the opportunity to learn and share my humble reservoir of Indian dance with artists such as Hanya Holm. My interactions with Martha Graham and Merce Cunningham have also been enriching and stimulating. The lesson I learned was that the “body in place” and the “body in space” were universal, the Alpha and the Omega.

In her writing, Vatsyayan analyzes clearly the notion of Time in theatre and the importance of traditions as part of a multi-layered pattern. With stoic calm, she speaks of colonialism and the domination of one culture over another, seeing it as one of many “layers” leaving footprints in the arts. With a marvelously clear eye, she refers to the, often misunderstood, notion of “crossover” with precision:

I have had the opportunity and privilege not only to be rigorously trained but also to be a participant in the vast canvas of Indian theatrical traditions at the rural level, at the tribal level. This has been reinforced by the training in modern dance, which has given me the ability to acquire the tools to analyze and even notate. Thus, the book Traditional Indian Theatre, Multiple Streams is an attempt to bridge the past and present, what may be called theatre and dance. It also interrogates the notion of polarity between the classical and folk.

As a critic from Scandinavia, a part of the world where stories are told with broad brushes, understanding something of the Indian past meant a great deal for me personally and professionally. The Indian classic tradition is refined and not easy to decode, but it helped guide me towards a more open-minded understanding of “time” and “narrative” on a stage in the 1980s and 1990s, when postmodern drama and performance was often a challenge.

The idea of fragmentized storytelling and undefined or empty space on a stage had long been a part of Indian tradition and explained many things to me about Ariane Mnouchkine’s art as well as Robert Wilson’s—the freedom to structure extended storyline, to cut and focus according to principles other than simply telling, explaining and preaching. The richness of image in this theatre, the power of tiny elements—a raised eyebrow, a small look—was often stronger than all the blood normally shed in a Western epic.

Parallel with her research into Indian classics was her ability to “unfold the structure of theoretical formulations.” In doing this, she stressed another perspective: “the fundamental mathematical principles underlying all the arts, ranging from architecture, theatre, dance and music.”

Her book The Square and the Circle of Indian Arts addresses itself to what she sees as fundamental mathematical and geometrical abstractions underlying these arts. “It was the study of dance and theatre which propelled me to view all Indian arts in their aspects of inter-relationship and inter-dependence.”

Her arguments, clearly stemming from her own cultural roots, are nevertheless relevant for other times and forms, European baroque ballet, Japanese butoh and even Shakespeare in the twenty-first century.

Looking back on 2012 again, I said at the award ceremony that Kapila Vatsyayan had changed the way we critics think.

Her importance in India is deep and wide, but to the world beyond the subcontinent she has described the richness of her tradition in such a precise way that it puts our own in a new context. To be able to present her as our fourth Thalia Prize laureate is a great joy and proof of the fruitfulness of global work.

It is, of course, sad that she is no longer with us. A person of her grandeur will always be deeply missed. But her writings will continue to give pleasure, provide insights and spark new ideas for the future. And that is the essence of what the Thalia award is all about.

*Margareta Sörenson, President of IATC, is a Swedish theatre and dance critic, a writer and researcher in dance history. She has written for the daily national paper Expressen since the early 1980s and for the Swedish dance journal Danstidningen, in addition to writing a number of books on the performing arts, the latest on Mats Ek, with photographer Lesley Leslie-Spinks. Her special interests in dance and puppetry have often led her to the Asian classical stage arts and increased her curiosity about contemporary ones.