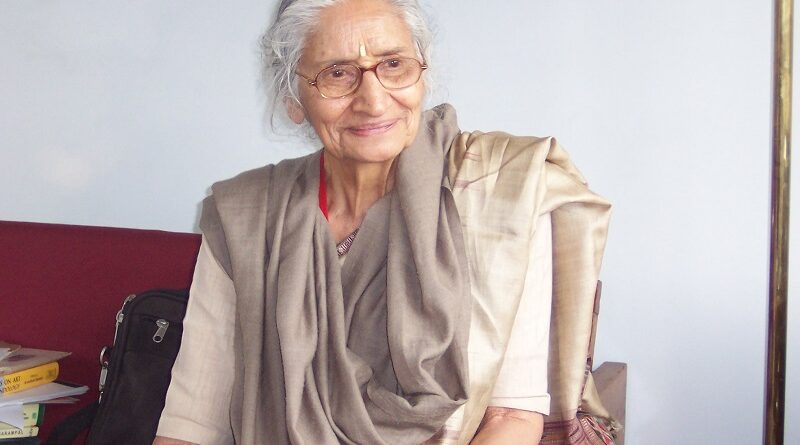 The recent death of Thalia laureate and renowned dance scholar Kapila Vatsyayan at the age of 92 has left the cultural community in both India and the larger world in deep sorrow. Through her many published contributions, Dance—the soul of Indian culture—was given a meaningful, realistic and holistic perspective opening new avenues for practitioners and researchers of the performing arts.

In the year 2000, I was assigned to write an article on interdisciplinary art forms for Theatre Research International, the journal of the International Federation for Theatre Research published by Cambridge University Press. I struggled to find worthwhile material until I remembered her book Bharata: The Nāṭyaśāstra; it had totally transformed my views regarding the Natyashastra, and re-reading her analyses reminded me how she always managed to see art with fresh eyes.

Until this publication, I saw the Natyashastra as just another ancient scripture defining the art of theatre as a part of a philosophical stream. But Vatsyayan interpreted it through almost scientific insights, a systematic amalgamation of interdisciplinary crossovers of various art forms. She also insisted that the very meaning of the word Natyashastra had been misunderstood. To her, it needed to be seen as The Science of Theatre. No one had really understood this important treatise in that way before her.

Indeed, her scientific logic could be followed through every step, from her explanation of Rasa theory—as conclusions from the Ayurveda (the classic book of medical science)—to the principles of theatre architecture and Sanskrit classical performance space derived from the Sthapatya veda (a classic work of theatrical architecture).

Her major book, Indian Theatre: Multiple Streams, portrays Indian culture as a vast Banyan tree with a sturdy central trunk and several subsidiary branches which, though appearing independent, she argued, were tightly connected to the center. She said that pulling any branch from the trunk—either practically or intellectually—would lead to a practical and theoretical dead end.

Which is to say that Mme. Vatsyayan saw Indian Culture as a whole with a huge variety of artistic forms operating under one vast canopy. Truly a pioneer in this type of thinking, her acceptance speech on receiving the Thalia Award from the International Association of Theatre Critics in 2012 acknowledged these interconnected philosophical foundations of Indian art and culture.

Kapila Vatsyayan was herself a trained dancer in the Santiniketan school, founded by Rabindranath Tagore and Rukmani Devi’Arundale, in Chennai. That is, she acquired her expertise directly from masters through learned gestures and body language. She added sophisticated thought to her physical knowledge with an MA in English from the University of Delhi and then another MA in Education from the University of Michigan. She later obtained a PhD from Banaras Hindu University. In all these endeavours, she was determined to combine theoretical knowledge with extensive practice.

Her formative years in Shantiniketan were also connected to her wider studies of Indian culture. It was there that, in addition to dance studies, she immersed herself in literature, painting and music. Later, she became a disciple of art scholar Pandit Vasudev Sharan Agrawal. She also studied Kathak with the legendary Achhan Maharaj, Manipuri with Amubi Singh and Bharatanatyam with Meenakshi Sundaram Pillai.

I met Mme. Vatsyayan for the first time in 1980, at the National School of Drama, as a representative of the Student Union. At the time, she was Special Secretary to the Government of India in charge of all arts institutions. In a private conversation with some of us, she admitted that she herself had some doubts about the organization and management of the school and several other cultural institutions. Yet, she had great appreciation for the hard work of many artists who were involved, including B. V. Karanth, then Director of the NSD.

At that time, we were arguing for an increase in the school’s overall budget, and we had scheduled a meeting with the Minister of Education, Sri P. Shiv Shankar. She joined the meeting on her own initiative and, later, invited the students to come to her office. She spoke to us frankly, going so far as to call the school a “white elephant.” She also suggested that if we could not come to an agreement, the school might wind up being moved out of the centre of New Delhi to Kutub Minar, near the Aravalli hills. We wondered if she was truly on our side.

Later, we met with Prime Minister Indira Gandhi and urged her to increase the school’s budget. She said she had to speak with Mme. Vatsyayan about it. To our surprise, within a few weeks, the school’s budget tripled. There was only one proviso: the new funds needed to be spent during that very fiscal year which was ending in twelve weeks. We happily helped the school to use those funds, which was not always easy because of the government’s endless bureaucratic complications. When Mme. Vatsyayan later asked the Student Union for support on another issue, we eagerly worked with her. We knew we owed much to her. And anyway, one did not argue with this great lady.

Years later, I did an interview with her as part of my own doctoral research. I found her very open, very personal and more than willing to express her emotions. She admitted that, on too many occasions, she was pessimistic and dissatisfied with the arts and cultural segment of the country. She felt that many of those she was meeting with were not honest. At such moments, I could be little more than a silent listener because I myself was just learning about how the cultural and political world worked in my country.

During the 2010 Congress of the International Association of Theatre Critics in Armenia, it was proposed to honour her with the next International Thalia Award for Critical Writing. I was asked to see if she would accept the award and attend the ceremony in 2012, in Warsaw. Back home, she and I met again; she was genuinely delighted with the proposed honour, but she would not be able to attend in person. Her health was deteriorating at this point, and she had also lost her sight. She asked me to accept the Thalia on her behalf.

I did so in 2012, having brought to Warsaw with me a moving video of thanks from her. When I returned to India, I encouraged Karna Singh, Chairman of the Indian Council of Cultural Relations, to organize a special ceremony bestowing the honour on her in Delhi. She was able to attend that local presentation, and she was thrilled. She shared her happiness at the international recognition of her work by actually dancing for the audience on the stage. Everyone in attendance was clearly moved, understanding that dance was both her breath and soul.

Almost all my meetings with her after that were more personal; opportunities to pay respect but also to continue to learn from her. And certainly, every meeting with her brought me some new understanding. I remember her once asking me for a favour: could I try to find a specialist abroad for her who could restore her vision? She so wanted to read again. Such was her unquenchable thirst for knowledge.

Mme. Vatsyayan was proud of so many of her accompishments—particularly having established India’s Centre for Cultural Resources and Training, and having early on proposed the Indira Gandhi National Centre for the Arts. She also served as the Vice-President of the Indian Council for Cultural Relations and as President of the India International Centre (where she was Chair of the Asian Research Division).

She will, of course, long be remembered for her many books on Indian dance; books which have been translated widely, books which have long served as beacons for scholars of culture world-wide. Her long life was all Art in every sense. She will be missed.

*Ravi Chaturvedi, Professor of Theatre Arts, is the President of the Indian Society for Theatre Research and the former director of the School of Media and Communication in Manipal Univesity. He is founder and Head of the Department of Theatre and Film Studies in Mahatma Gandhi International Hindi University.