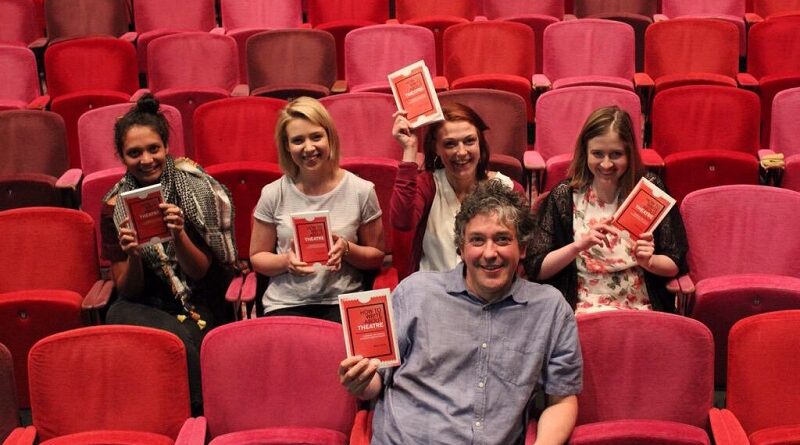 This paper explores the realities of facilitating online theatre criticism workshops in the time of COVID-19. Its author reminisces on teaching these workshops pre-COVID and speaks to the added challenges and unexpected successes of migrating them online to a larger base of participants.
Keywords: COVID-19, teaching, workshops, Zoom, technology

It is October 2016, and I am sharing a stage at Trinity College Dublin with Peter Crawley of the Irish Times. We are talking about theatre criticism, and I want to make a point about the way every critic—and indeed every member of the audience—sees a show in a slightly different way.

To illustrate my argument, I leave my seat, climb the raked auditorium to the back row and sit next to a student. I expect her to cringe in embarrassment and everyone else to laugh. At that point, I plan to point out that this student’s experience is necessarily different from everyone else’s. For her, the performance would be uncomfortable; for everyone else, it would be fun.

Except she does nothing of the kind. She holds my gaze and remains relaxed. If she is uncomfortable, she is not showing it. I stumble on regardless, trusting my return trip down the aisle will demonstrate how a performer’s proximity can change the way we feel.

It is only after the event that Crawley explains my error. The student I had chosen to sit next to is actually an actor, Breffni Holahan. Her work includes VARDO by the brilliant site-specific company ANU. In that show, she played a sex worker in a real apartment in Dublin’s former red-light district. The role required her to get up-close and personal with one audience member at a time. She is not someone to be fazed by a wandering theatre critic with a poor sense of social distance. “I remember the moment well,” says Crawley today, “and seeing you pick the most utterly unflappable target in the room with what seemed like fated precision.”

Ah, the joys of live performance!

It is a memory that has returned to me now as I move my criticism workshops online and think about what I am missing. In the digital world, I can make the same argument as I did then. I can describe the difference between sitting in the stalls and perching in the gods. I can explain how every one of us is a product of so many influences and biases that objectivity is impossible, even if it were desirable. I can say that when someone writes to the editor to ask, “Did Mark Fisher see the same play as me?” the correct answer is, “No, I saw it with my eyes, you saw it with yours.” But what I cannot do is leap from my chair.

I can tell but I cannot show.

Since the publication of my book How to Write About Theatre (2015), I have visited universities, schools and theatres to run two-hour workshops about the craft of reviewing. In the U.K., I’ve talked in lecture halls, rehearsal rooms and theatre foyers. Further afield, I have appeared in a classroom in Valetta, a meeting room in Sao Paulo and a studio in Santiago. No two spaces are alike, and no two arrangements of participants is quite the same. I relish the unpredictability. I love the way, as with live performance itself, the tone and energy of a workshop is influenced by the room we are in and the architecture of the space, just as we are all subject to our moods, the weather and the politics of the day. These moment-by-moment shifts are what makes live theatre—and writing about live theatre—endlessly interesting.

Towards the start of a workshop, I will often prowl round the room or walk up the aisle, just as I did in Dublin, to draw attention to how much the meaning of a performance is locked into our spatial relationships. If the teacher stands in front of a whiteboard with the students sat in rows, it feels orthodox and hierarchical. If we arrange the chairs in a circle, it becomes egalitarian. If I sit behind a desk, I look defensive; if I sit on the desk, I seem open. By extension, a play performed in a proscenium-arch theatre has a different meaning from the same play staged in an abandoned factory. Even before a word is spoken, the setting establishes a distinct atmosphere, perhaps even a value system. We are not always good at articulating how that atmosphere affects us, but every time we go to the theatre, we instinctively adapt, critics and audiences alike.

I did one such workshop in February 2020 at the Central School of Speech and Drama in London, where Dr Joel Anderson runs an MA course in theatre criticism and dramaturgy. I did not know it would be my last real-world session for some time. Within a month, the COVID-19 pandemic was forcing universities and theatres to close. I was out of a job. Like many, I took a while to adjust to the new normal, but as a freelance writer in need of an income, I realised I could take the workshops online.

I would have called them “How to Write About Theatre When There Isn’t Any Theatre to Write About” if it had not been too close to the truth.

For the same reason, I worried nobody would be interested. Wouldn’t they all be rethinking their careers? Being a theatre critic is a precarious business at the best of times and now . . . Who would want to learn more about such an endangered profession?

But, thanks to the reach of social media, I discovered they were interested. Putting a toe in the water, I ran three workshops in close succession at the start of May. They proved successful enough for me to continue more-or-less weekly since then. Some participants have returned for follow-on workshops, others for one-to-one sessions. I have also picked up a few high schools and youth groups.

But successful or not, I can no longer circle the room. Instead, I sit looking at the same arrangement of Zoom faces in their individual spaces, flat and two-dimensional. As with online theatre, you miss the depth of field and the sense of everyone breathing the same air. It works, it is practical, it just lacks that special dynamic of bodies together in a room.

Yet, even though we are not physically together, I quickly realised the workshops do capitalise on the human need to congregate. It almost does not matter that the subject under discussion is criticism; just as important is the opportunity to spend a couple of hours with like-minded people. With COVID-19 ruling out the possibility of theatre­—and, with it, the possibility of earning a living from theatre—the morale of many of the participants has been low. “I’ve been in a slump,” wrote one South African participant on Twitter later, “but after being part of one of his workshops, I’m excited to write about theatre again!” (@Varvara13)

Morale-raising had not been my intention, but she was not alone in expressing that sentiment. “I have been sorely missing theatre of late,” wrote another, “and an afternoon chatting about theatre and criticism was just the tonic” (@E_dayEccentric).

Spending two hours talking about criticism might sound an esoteric pursuit, but talking about criticism means talking about art. And talking about art means talking about yourself, your passions, your tastes, your values, the world at large. That must have been the thought on A.O. Scott’s mind when he called his 2016 book Better Living Through Criticism. In a free-wheeling contemplation of the form, he contended that thinking and judging are what we do as a species, making criticism fundamental. “This book is also, I hope, a celebration of art and imagination, an examination of our inborn drive to cultivate delight and of the various ways we refine that impulse,” he wrote (Scott 16). Maybe writing about theatre when there is not any theatre to write about is not such a crazy idea after all.

Another happy accident is that most of the workshops have become international forums. Free from geographical constraints, online discussions are global. In one session, the conversation bounced back and forth from my spare bedroom in Scotland to living rooms in Ireland, Italy and Canada. Participants have logged on from Bahrein, Singapore and Florida. This has two effects. One is to create a sense of shared experience, of theatre lovers all over the globe dealing with the lockdown in similar ways. That feels nourishing and supportive. The other, just as valuable, is the opposite: to learn about distinct features of local theatre cultures, be it embedded criticism in Manchester, voices of oppression in Cape Town or identity politics in Ottawa.

The conversations have ranged more broadly still. Some of the best workshops have been those attended by theatre professionals curious about the critic’s job. There was the U.K. artistic director who lamented the decline in regional critics and the failure of visiting national critics to understand the local context. Another director wondered whether critics showed enough care towards productions mounted at huge financial risk. Playwrights, press officers and actors have brought equally stimulating outside perspectives. Later in the summer, the workshops took on a tone of political urgency as several people, led by playwright Chinonyerem Odimba, paid for black critics to attend. In the months following the death of George Floyd and the global Black Lives Matter protests, the participants asked questions about whose voices were being heard in theatre and in writing about theatre.

There are technological bonuses too. My real-world workshops are avowedly lo-tech, requiring no more than a pen and paper. But seeing as everyone is sitting in front of a computer, I have found it to too tempting not to make use of the share-screen function and throw pictures, videos and websites into the mix. In the middle of the workshop, I usually ask the participants to spend ten minutes writing a mini-review. Previously, they would have had to read them out loud for me to comment on. That was before an online participant suggested we use Zoom’s chat function to share the reviews, allowing me to make a speedy assessment and keeping everyone else in the loop.

So, yes, I miss the uncertainty of finding myself in a new room in an unfamiliar town, searching for the moment of spontaneity that will give shape to a workshop, but so too will I miss the unintended consequences of the virus, the spirit of resilience, the easy internationalism and the meeting of online minds.

@E_dayEccentric. “Spent a lovely couple of hours at a theatre criticism workshop run by @WriteAboutTheat today. I have been sorely missing theatre of late, and an afternoon chatting about theatre and criticism was just the tonic. Check out Mark’s upcoming workshops at the twitter page above.” Twitter, 5 May 2020, 7:40 p.m.

@Varvara13. “What an amazing #LoveTheatre experience spending 2+ hrs soaking up the insight & knowledge of @guardian theatre critic &  @WriteAboutTheat author, @MarkFFisher. I’ve been in a slump, but after being part of one of his workshops, I’m excited to write about theatre again! Brilliant!” Twitter, 7 May 2020, 8:33 p.m.

Fisher, Mark. How to Write About Theatre. Bloomsbury Methuen Drama, 2015.

*Mark Fisher is a theatre critic for the Guardian, a former editor of the List magazine and a freelance writer. He is the author of The Edinburgh Fringe Survival Guide (Bloomsbury) and How to Write About Theatre (Bloomsbury). More information about his online criticism workshops can be found here.