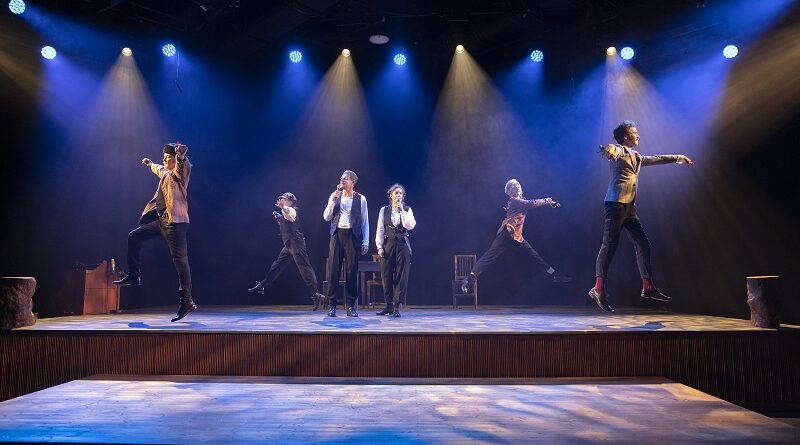 Young male directors in Finland have been in the habit of staging a Dostoevski to prove that they are deep, profound and serious artists. After seeing Harhama at Espoo City Theatre, I wonder why they need Dostoevski when we have a gothic soulmate of our own in Algot Untola (1868–1918).

One of Untola’s more than 40 pen-names is Irmari Rantamala, whose debut novel is Harhama (1909). In the same year, Rantamala also published his second novel, which attacks the criticism directed against his Harhama.

Irmari is a cross-gender name. Untola’s common-law wife is reported to have poured acid on his genitals, and thereafter Untola published only under female pen-names or under initials instead of a first name. His short novel Out to Borrow Matches (1910) is a grotesque folk comedy, which keeps getting stage versions and has been filmed twice.

Juha Hurme dramatized Harhama’s 1,100 pages into a three-hour production. The title character, Mr. Harhama (“chimera,” “delusion”), intends to write a God-denying book. To be on secure ground he first gets acquainted with various plights, and the ideologies which claim to abolish them.

At the time of writing, Finland was part of Czarist Russia. Untola lived for a few years in St. Petersburg and his Harhama socializes freely at different levels of Russian society, which is unique in Finnish literary history. Untola’s depiction of proletarian misery in St. Petersburg outdoes Gorki or Dostoevski in melodramatic excess: a dead baby sucks a frozen drop of blood from her dying mother’s nipple. No wonder Harhama turns into an anarchistic socialist for a while and participates in the assassination of a traitor.

In the company of Russia’s nobility and military elite, Harhama becomes a believer in capitalism in its most ruthless form. On stage, this is done neatly as a song about the weak deserving only to be disposed of. The song form is an obvious allusion to the political theatre of the 1970s, but the composer Petra Poutanen and director Hurme neither preach nor feast in the irony; Finnish spectators expect obvious irony or trendy earnestness, which flatters their understanding. When Hurme’s Harhama offers space for a more subtle reception, it sadly fails to reach over the ramp.

The next step in Harhama’s (Tomi Alatalo) search is religion. Father Peter (Eetu Känkänen) patiently guides him into submission and prayer. But Harhama prays to Satan for literary support. Satan is played by actress Roosa Söderholm with red eye-makeup. The last word of the show belongs to Satan, who celebrates the number of mentions she is given in the Bible, which she has come to prefer over Harhama’s book. Perhaps Satan’s gender is theatre’s way of dramatizing the hundreds of pages where the novel is obsessed with female sexuality’s demoralizing effect on almost everything.

Harhama returns to his native Finland only to be seduced by Mrs. Esempio (Cécile Orblin), a widowed actress in need of money. In the novel, they talk for hundreds of pages about whether it is morally correct to have sex with no intention to marry. On stage, it takes two curt scenes where Mrs. Esempio literally attacks and charms Harhama—eternity both stretched and condensed as only theatre can do! This is also where Harhama’s role as a bystander to (his own) life works well on the stage, when Alaranta shows Harhama’s bewilderment and reticence. At the end, when Harhama realizes the amount of his sins and collapses, and the actor must part from his function as a self-reflecting narrator, there remains little for him to express save to wriggle on the floor.

Harhama would make a flashy superhero movie. There are so many opportunities for special effects. Satan has countless palaces where columns are built of snakes. A hundred thousand angels (from Finnish folklore) flatter her with songs. Crimson ravens vomit fire all over the pages. The difference between Untola and Hurme is in the dosage: in the novel thunderstorms regularly accentuate the dialogue, whereas on stage there is but a single lightning strike. Hurme does not tame Untola’s love for the grandiose but rather channels it in a decisively good-humoured manner.

At Espoo, the set is that of a 1950s village hall. The magic is created by Untola’s peculiar vocabulary and Raisa Kilpeläinen’s lights. The set is familiar to Finnish collective memory and probably helps make the play’s philosophical discussions more palatable. It also ties Harhama’s world to Untola’s folk comedies; earlier research emphasized a sharp division from one pen-name to the next in Untola’s work, but Hurme follows more contemporary views that Untola depicts a grotesque world no matter what stylistic variations his narration employs. Naturally, the set is also a consistent feature of Hurme’s aesthetics of poor theatre, where it is the ensemble who create the soulscape. With swift costume changes, six actors portray 32 roles (http://www.critical-stages.org/12/from-lapland-to-spitzbergen-with-juha-hurme/).

It is also interesting to note what Hurme leaves out or downplays in his dramatization: Finnish party politics of 1905; post-relationship jealousy and revenge between Mrs. Esempio and Harhama; the importance of money which Untola recognizes just as feverishly as Dostoevski; the humble Christian ethos in clearing forests into agricultural land. Perhaps the latter would not strike a chord in proudly urban Espoo.

Finland gained her independence in the aftermath of the October revolution. In our ensuing civil war, in 1918, Untola became and remained the sole editor of a social democrat newspaper. After the war, the “white” winners condemned him to death as a “red” agitator. Untola was drowned in the sea on the way to his execution between mainland Helsinki and a garrison island. In Harhama, Untola had foreseen that “a socialist society would be a slave state held together only by police force, the most inhuman prison humans can imagine.”

*Matti Linnavuori wrote theatre criticism between 1978 and 2013 for various newspapers and weeklies in his native Finland. In 1985, he worked for the BBC World Service in London. Since 1998, he has presented papers at numerous IATC events. In the 2000s, he wrote for Teatra Vestnesis in Latvia. Since 1993, he has written and directed several radio plays for YLE the Finnish Broadcasting Company. His latest stage play, Ta mig till er ledare (“Take me to your leader,” 2016), ran at Lilla teatern in Helsinki.