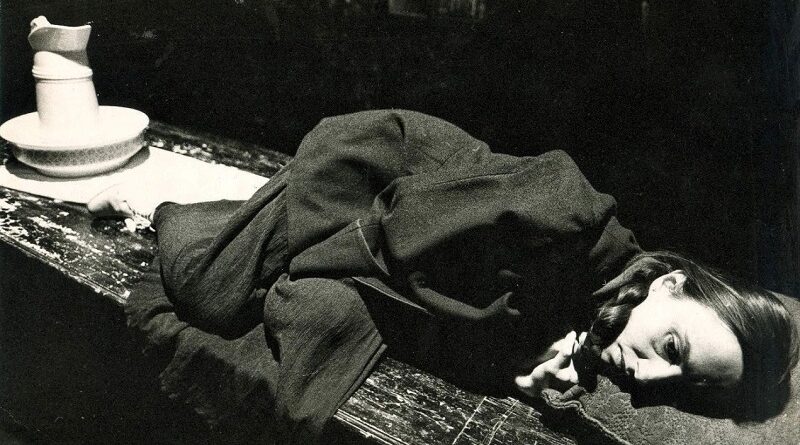 Margarita Mladenova is an emblematic director of Bulgaria’s contemporary theatre. She was born in the city of Svishtov on the Danube, in 1947, and studied Theatre Directing at the National Academy of Theatre and Film Arts (NATFA), Sofia. From the beginning she showed signs of being a promising young director. Two authors were crucial to her development throughout the 1980s: namely, the great Bulgarian poet Valeri Petrov (whose works provided the inspiration for some of Mladenova’s best productions during that period), and the Russian playwright and dissident Ludmilla Petrushevskaya, whose critically acclaimed play Cinzano Mladenova staged in 1987.

In her productions based on the works of these two authors, Mladenova deepened her interest in the visual poetic theatre language. She also became engaged in collaborative experimental work with actors who urged her to establish her own theatre laboratory. Mladenova’s dream came true in 1988, when she set up Sfumato Theatre Laboratory together with Ivan Dobchev (born 1947), another ingenious director, who established himself in the 1980s.

Sfumato TL has been the most stable of Bulgarian experimental groups over the last three decades and has enjoyed the greatest international popularity and success. The company emerged in the years after the fall of the Berlin Wall, a period of political change in the country that was attended by a rapid expansion of Bulgaria’s theatre map. Sfumato’s premiere production was a staging of Chekhov’s The Seagull on December 22, 1989. The company has continued its successful development since then until today.

The distinct characteristics of Sfumato TL’s productions are their distinctive visual images, their atmospheric theatrical aesthetic and the authenticity of the actor’s experience. In the first decade of their existence, the company was engrossed in experiments in, and in blending, the theatres of anthropology and psychology. Since the turn of the twenty-first century, they have focused on the techniques of postdramatic performance, and most recently, they have turned increasingly to socially and politically engaged theatre.

When establishing Sfumato TL together with Ivan Dobchev in the late 1980s, we made it clear that it was a purposeful political act. By investing efforts to open our own theatre laboratory (which we initially did separately, before we teamed up in a joint project), we demonstrated our desire to break with the ideological restrictions that existed and with the routine of Bulgarian theatre. We sought our own, new ways to study human nature and the world by means of stagecraft.

The company of about fourteen actors we invited at the time were, like us, eager to experiment, to break free from the conventional theatre system—which was focused on outcomes and on audiences’ warm reception. They wanted to work in a laboratory environment. We composed a manifesto for the company, A Studio Gospel, stating our goals, which were: to study, to experiment with theatre language, to strive to explore its great potential, rather than to have a completed production. That was how we began to develop our first production, Chekhov’s The Seagull: working slowly, seeking to delve deep and gain insight into the essence of actor’s and human nature respectively, to go beyond the established stage clichés of psychological theatre by using many devices of Grotowski’s anthropological theatre and Anatoly Vasiliev’s discoveries.

In its history, spanning three decades, Sfumato TL has had over 60 productions performed on national and international stages, and at prestigious festivals and showcases. Both of the directors, co-founders and managers of the Laboratory have conducted many workshops, masterclasses and residencies, not only in Bulgaria, but also in France, the US and elsewhere. Which of these productions would you highlight as defining?

Apocrypha (1997) and The Black Fleece (2000), which were co-directed by me and Ivan Dobchev, were emblematic productions in terms of their significance to the development of Sfumato TL’s own style. They breathed life into our main idea, which was to pursue the most productive ways of gaining really deep insights into human nature by means of intensive laboratory work with actors. Such productions not only made a clear statement of our programme, but they were also very well-liked by audiences and critics, and they gained international recognition and popularity.

The making of Apocrypha was a tough, but defining, moment for Sfumato TL. At the time we made every effort to ensure our company’s own space by reconstructing an old building in downtown Sofia. In 1996, two of our Chekhov productions, my Three Sisters and Ivan Dobchev’s Uncle Vanya, were performed at Nancy Festival Passages. We were immediately invited to put on Chekhov’s The Cherry Orchard for the 1996 edition of Festival d’ Avignon. In addition, the organisers of Passages liked our work very much and suggested that we make a new production, which would open its 1997 edition. Thus, Apocrypha came to pass. It was also the opening performance at our new building in Sofia.

In the earliest years of Sfumato TL you, in your capacity as a director, and the company as a whole, experimented by prioritising a blending of psychological and anthropological theatres in dynamic variations. This developed on the work you have done with Apocrypha in the late 1990s, taking you into the study of human nature, entirely through the application of the strategies of anthropological theatre.

That is right. In fact, our work in that period, which focused very much on experimenting with the devices of anthropological theatre, was framed by Apocrypha and The Black Fleece. Both productions underlay our Archetypes programme, in which, between 1996 and 2000, we were focused on archetypal human behaviour. This subsequently became the subject of our studies in theatre.

Apocrypha (subtitled Naïve Dreams of Man Between Earth and Sky) tells a pagan story about the birth of the world and man. It is a collage of Bulgarian apocryphal texts, placing emphasis on two main elements: a rough, vertical, wooden ladder linking heaven and Earth, which human beings climb up and down, and the ritual movement of actors (both as individuals and as a group), which we saw as a metaphor for the never-ending cycle of existence.

The Black Fleece delves into the history of the Sarakatsani (Karakachans, an ethnic subgroup, traditionally transhumant shepherds, native to Greece and Bulgaria) under communism, and how their specific nomadic culture has been wiped out by the process of forced unification.

I should add to these emblematic productions of the company Ohhh: Gogol’s Dream! (2009), a production in which we used works by the great Ukrainian writer in our attempt to explore, the subjects of dissociation of personality, claustrophobia as mental and social phenomena, commitment-phobia and loneliness; all of which are still relevant today.

Which productions of Sfumato TL, besides the two you have mentioned, were most critical to your own development as a director?

I think that the defining productions, as regards my development as a director, were The Sin Called Zlatil (1992), which was based on the play Boryana by great Bulgarian writer and playwright Yordan Yovkov, and Crazy Grass (1993), which was based on a work by Yordan Radichkov, another emblematic Bulgarian author. These productions paved the way for an aesthetic I had been striving towards for a while and had been pursuing in my previous works. I conceived of it as an ecstatic theatre, free of sentiment, free of any simulacra of authentic life, liberated at its very essence from the notion of the studied problem. Thus, The Sin Called Zlatil stripped naked the toothy skeleton of parsimony and fear, delving deep, not only into the atavistic areas of the Bulgarian psyche, but also into the essential human.

In Crazy Grass, which was critically acclaimed at Festival Bonner Biennale—Neue Stücke aus Europa in 1994—I studied migration to urban areas and the end of the poetic rural life by assembling pieces of texts and Brechtian alienation effects. Immediately after making these shows, I staged Chekhov’s Three Sisters (1994), Marina Tsvetaeva’s Yelabuga Station and productions based on Strindberg’s plays: Jean, Julie and Christine (Miss Julie) and The Dance of Death.

One of the main characteristics of your company is working on programmes exploring particular writers. What is the gist of these programmes? What are the sources of the unique theatre language of Sfumato TL?

We could not use the usual directorial and actorly approach to a certain play to establish our new theatre; we found that it denuded the theatre to its core, leaving only the skeleton of human nature. That was why we developed the idea of working on “programmes” based on such emblematic Bulgarian and foreign writers as Chekhov, Yovkov, Radichkov, Dostoevsky, Shakespeare and Strindberg, as well as turning to mythological, biblical and apocryphal stories. A programme on an author, or a selection of texts focused on a key subject or an existential issue, allows us to conduct prolonged, thorough and multidirectional theatre research.

The company has strived towards a thorough study of the human psyche and human nature as such through dedicated laboratorial work with the actor and the text. This underlies Sfumato TL’s language, where rehearsals are at the core of our experiment. To this end, the language of Sfumato TL brings together various devices and approaches blending, as was mentioned above, elements of the psychological and anthropological theatres. We seek to assess these elements critically, exploring their twists and challenges, and, lately, we have added other strategies, especially in the field of performance.

Since the turn of the twenty-first century you, in your capacity as a director, and Sfumato TL as a whole have been in transition to postdramatic theatre and theatre performance. Would you please expand on this? In which productions does this transition most distinctively manifest itself?

In the 1990s, we, the two directors of Sfumato TL, were making inner collages or working on collages made by us in advance of exploring texts. We did this regardless of whether or not we were putting on plays. We assigned the central place in our productions to the dramaturgical material; we retained its conceptual core. Lately, we have been increasingly interested in dramatic texts or collaged literary texts as spaces for characters and situations, where actors and spectators share personal experience, vibes and feelings. I think our most successful attempts in this regard have been The Valley of the Shadow of Death: Alyosha, which I directed, and The Valley of the Shadow of Death: Ivan, directed by Ivan Dobchev; these works were based on The Brothers Karamazov as part of our Dostoevsky Programme. I think our Strindberg Programme was also strong.

In our latest productions we have, more often than not, explored the changes in human nature in today’s complicated world. In doing so, our orientation towards political performance and contemporary documentary theatre seemed to deepen. I would highlight here Medea: My Mother, The Bright Future of the Flea Market, and The Plane is Late as our most significant productions.

*Kamelia Nikolova, PhD is a theatre researcher, historian and theatre critic. She is Professor of European Theatre and Head of Theatre Studies Department at the National Academy for Theatre and Film Arts, Sofia; Research Fellow at the Institute of Art Studies, Bulgarian Academy of Sciences; and a visiting professor at other universities. Her research and teaching interests are connected with the history of theatre, theories of drama and performance and new theatre practices. The list of her publications includes ten books and many studies and articles published in over ten languages.