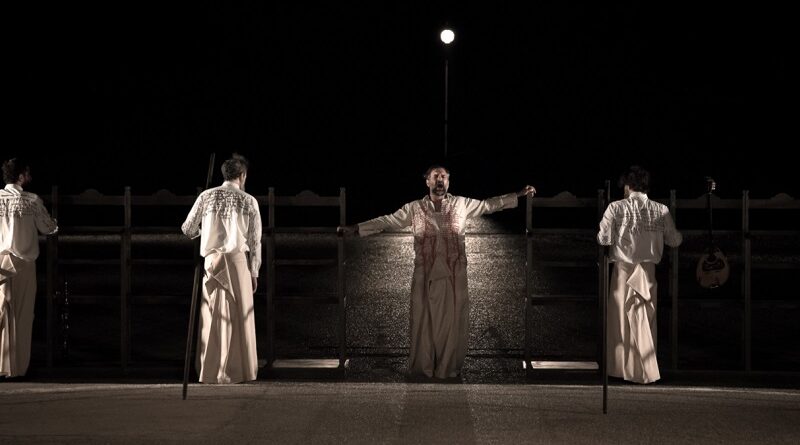 The Athens and Epidaurus Festival had planned to celebrate its 65th anniversary with more than 70 productions, but because of the corona pandemic only a quarter of them were presented, in the open-air venues of Epidaurus and the Odeon of Herodes Atticus. In what follows, two of the festival’s “fragments” claim our attention: director Dimitris Lignadis’  take on Aeschylus’ The Persians, and Noah’s Ark / Il diluvio universal, an unconventional reconfiguration of Michelangelo Falvetti’s homonymous work born of the collaboration of Rafi music theatre company and performance team Nova Melancholia.

Exactly twenty-five hundred years ago, the Greek fleet under the command of the Athenian Themistocles and the Spartan Eurybiades defeated the Persian forces of King Xerxes in the Battle of Salamis. The allied victory of the Greeks decisively altered the course of the second Persian invasion of Greece: the Persian navy was destroyed, Xerxes’ army was in a state of near collapse, and the king himself fled to Asia. What we now know about this turning point in history comes not only from the historical accounts of Herodotus and Thucydides, but also from Aeschylus’ The Persians (472 B.C.), the oldest Greek tragedy to have survived in full,[1] written by a man who is said to have fought in the battle of Salamis.

Contrary to what one might expect from a Greek playwright (as well as citizen and soldier), in Aeschylus’ play the events at Salamis and their implications for the Persian army and empire are dramatized from the point of view of the Persians. The plot is set in the Persian capital, Susa. There, an assembly of elders (the nine-member chorus) is gripped by a sense of unease and alarm while expecting news of the outcome of the Persian campaign. Apprehension turns to dread when Queen Atossa, Xerxes’ mother, wife of the deceased King Darius, joins them and recounts an ominous dream she has had. The terrible truth it encodes, none other than the disaster that befell the Persians, is soon confirmed by a Messenger. Desperate, the Queen and chorus summon the ghost of Darius for counsel, but he only condemns Xerxes’ hubristic actions. By the time a devastated Xerxes reaches Susa to mourn together with his loyal subjects, the chorus evinces signs of alienation from their King; their once unwavering trust in his God-given power seems to have suffered a heavy blow.

The chorus’ ingeniously tempered responses to the acts of speech that propel the drama of The Persians forward—in a drama famous for its lack of much conventional action—in fact constitute this production’s strongest asset. Lignadis has directed an exquisite chorus. Their seamless transmission of intellectual and affective states was a delight to witness. Although it took them a couple of minutes to let their bodies and the long sticks they were holding (now as spears, now as oars . . .) flow with the currents of the choreography, once they did there was no faltering in their almost dervish-like, enchanting movements. The musical backcloth, masterfully woven by Yiorgos Mavridis’ (Greek) Macedonian lyra, deepened the emotional impact of the mystagogical experience with which this chorus enthralled us.

Lignadis stayed close to Aeschylus’ text for the most part, assisted by Theodoros Stefanopoulos’ fine translation. But he turned the original’s chorus of elders into young and robust men, which created an uncanny yet welcome effect. It was as if the dead Persian warriors to whom the play refers again and again have come to haunt the heart of the Persian empire. The chorus embodied the ghosts of youth lost, of dreams ruined, and played out an attempt to come to terms with a collective trauma caused by the narcissistic delusions of an arrogant leader. I only wish that Darius’ ghost, played by Nikos Karathanos, had been half as resonant. Instead, it sometimes, rather inscrutably, bordered on the comic—and that is to put it mildly.

The second strongest asset was the performance of the Messenger, by Argyris Pantazaras. No unnecessary bravado, no hesitation, sharp throughout, heart-rending at times; pitch-perfect! On the contrary, Queen Atossa’s rendering by Lydia Koniordou (whom we could barely hear from the upper rows despite the venue’s unique acoustics) and Xerxes’ by Argyris Ksafis were too pompous and too understated respectively. And their costumes, fabric and skin embroidered with Aeschylus’ text, were more striking than helpful as they drew too much attention to themselves to the detriment of the performative and emotive intent of the actors.

Lignadis’ and his team’s affair with Aeschylus’ classic was a decent one. One of its feats to be specially commended was that it directed emphasis away from the age-old debate “Is the play sympathetic to or condescending of the Persians?” and toward a most timely question: “Whose defeat are we to lament now? And whose megalomania is responsible for it?”

Noah’s Ark / Il diluvio universale, based on Michelangelo Falvetti’s seventeenth-century baroque oratorio, interweaved opera and performance art to explore, much like Lignadis’ The Persians, how we can make sense of our losses, work through and grow into them. On the stage of Little Epidaurus, the elements of Nature, Water, Fire, Air and Earth, conspire with Divine Justice and Death to cleanse the world from human vice and from the latter’s imprint on the planet. The species that survive the “universal flood” by boarding the Ark unleash a different flood of free associations, both multivocal and colorful (literally and figuratively). Coursing through its streams, archetypal symbols as well as primal desires and fears drift up to consciousness—and conscience—not only current environmental and ecocritical concerns, but also sociopolitical public debates regarding neo-fascism, racism, gender and sexual violence.

Falvetti’s harmonies and excerpts from the original libretto (by Vincenzo Giattini); Greek pop music and poetic interventions; musical, vocal and dramatic improvisations by an ensemble of talented musicians and proficient lyrical performers;[2] a pro-love demonstration, rainbow-colored and dotted with placards alluding to ongoing domestic and foreign rights claims, all join to make up a patchwork fabula, as ardent as it is graceful. Although the performance’s critical reflectivity slipped into didacticism a few times near the end, its consciousness-raising energy was not compromised. That was an honest and well-executed attempt by the teams of Rafi and Nova Melancholia to productively converse with the older text and let it speak to the present.

[1] More information about the performance and its cast by the National Theatre of Greece can be found here. It is worth noting that this is not the first time the festival hosts a production of The Persians; see Savas Patsalidis’ review of a 2009 production here.

[2] The names of the cast and contributors appear at the website of the festiva.

*Aikaterini Delikonstantinidou holds a PhD in Theatre Studies from the School of English, Aristotle University of Thessaloniki. Her articles have been published in numerous volumes and journals, her research work has been presented at national and international conferences, and she is the recipient of several grants and scholarships. She is currently working as a post-doctoral researcher at the Department of Theatre Studies, National and Kapodistrian University of Athens, Greece, focusing on applications of Digital Theatre in Adult Education. She has been a member of the web team for and a regular contributor to Critical Stages since 2014. Her monograph, titled Latinx Reception of Greek Tragic Myth: Healing (and) Radical Politics was published by Peter Lang in the summer of 2020.