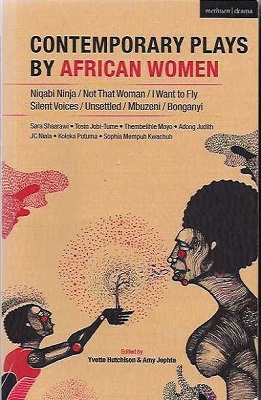 The thought-provoking introduction to this collection of seven plays by women from across Africa begins with the inevitable question: what do African women write about? Considering the wide range of “lived (and imagined) experiences” of its authors, the introduction asserts that a black woman putting pen to paper is “almost always a political act.”

Built around the Women’s Playwriting Conference of 2015 held in Cape Town, South Africa, the volume represents the publication of new plays by African women—an event, the editors acknowledge, that is still rare, one that tends to exist “on the fringes of criticism, academic pursuit and production.” This is unfortunate since these plays do reflect much of their individual societies while emphasizing important differences in artistic approach of the continent as a whole. Beyond the expected tropes of tragedy, trauma and the interrogation of post-colonial legacy, one finds in their cultural specificities genuine theatrical invention, along with generous doses of humour and irony.

These scripts cover a range of forms and styles from interviews to collective and collaborative creation. Often translated into English from a mother tongue, by the author herself, they encompass songs and sayings in the local language that vividly individualize each piece. Glossaries of terms are liberally supplied. As well, each script includes a basic biography of the writer, a brief production history and a useful critical contextualization of the theatrical/social/political landscape from which the piece emerged.

It must also be said that there is a certain disparity in quality. Although some plays hijack dramatic possibility with an overemphasis on message, all are worth a look. The editors seem more interested in representing a wide range of styles rather than attempting to canonize. As such, each writer’s approach is quite different. For instance, Niqabi Ninja by Egyptian playwright, translator and performer Sara Shaarawi is a punchy, cartoonish, dark-humoured revenge tale inspired by violence against women at the Tahrir Square demonstrations while Unsettled, by Kenyan poet, playwright and screen writer J. C. Niala is a sophisticated look at the delicate balance typifying black/white co-existence in that country’s ongoing contentions over land rights and housing development.

For its part, Not That Woman by Nigeria’s Tosin Jobi-Tume scrutinizes the stigmatizing of female victims of sexual abuse illustrating how it is often perpetuated by women themselves. Centred on the mysterious death of the founder of a women’s refuge centre, it relies heavily on awkward drawing room-style dialogue and a static list of abuses making it at once both discursive and too prescriptive. Its use of a “play-within-a-play” is simply not woven effectively into the fabric of the human drama.

Also somewhat overstated is I Want to Fly by Zimbabwe’s Thembelihle Moyo, a script which highlights the “plight of the girl child” who “dreams of a better life,” wanting more than simply an arranged marriage and financial comfort. In South African poet Koleka Putuma’s Mbuzeni, we are told the story of four orphan girls, their sisterhood and their fixation with burials. Purporting to convey “the ‘untold’ black female narrative,” the playis compellingly symbolic and discomfitting in its merging of existence and the afterlife.

A totally different style of text is Boganyi by Cameroonian Sophia Mempuh Kwachuh. This is a dance-drama “told from the perspective of a ghost” and based on “the common belief in Africa generally and in Cameroon specifically, that people don’t completely cease to exist when they die.” Set in Cameroon’s pre-colonial period, it depicts one clan subduing another. Vividly imagined, it reads like a choreo-poem utilizing the voices of a beautiful young dancer and her various male admirers. The piece expresses both her passion for dancing and her courage in dealing with the manipulations of the males who would take advantage of her lowly status.

One of the most complex and significant plays in the volume is Silent Voices by Ugandan, Adong Judith. Based on interviews with people involved in the Lord’s Resistance Army during the Northern Ugandan War (1987–2006), it deals with the vexing issue of forgiveness and reconciliation, “how victims have been ignored . . . at the expense of justice.” Serious, complicated, highly dramatic, passionate, variously chaotic and arguably too long, it has also been regarded as the “the spiritual rebirth of theatre in Uganda” after the regime of dictator Idi Amin.

In creating Silent Voices, Adong “listened to the anger and frustration expressed by . . . victims about Uganda’s Amnesty Act, which they felt ‘rewarded’ perpetrators for confessing to heinous crimes.” The silence of the title refers to “the repressive silencing these victims feel their government is forcing on them in the name of forgiveness.” In researching this material, the playwright returned to her own war-ravaged town “to study the use of theatre in the psychological therapy of the children who filled the ranks” of the infamous LRA.

The play was initially turned down for production by most Ugandan theatres who felt it “preached revenge.” But outside Uganda it found an audence and it was produced in New York, Toronto, Chicago and London. Indeed, the then artistic director of the Old Vic, Kevin Spacey, spoke of the play’s importance. It took until  2012 for Silent Voices to be premiered at the National Theatre of Uganda, “amidst fear of Adong’s arrest for her portrayal of the government’s role in northern Uganda war crimes.”

The scale of the piece—its political and dramatic scope—is immense. Settings move from theatre to bush, from hut to jungle, from rehabilitation centre to courtroom, from past to present. The play is written for a cast of 30–10 adults, 10 children and 10 dancers. Each actor plays several roles reflecting the chaotic reality of lives lived.

The most significant character, called simply Mother, is singular and powerful, a time bomb throbbing at the ideological and dramatic heart of the play. Those closest to her—Omony and Margaret—swirl around her steely resolve. The former is her son; the latter, his girlfriend who works as a rehabilitation officer trying to help the once child-soldiers. But she is also the granddaughter of a former rebel leader.

We first meet Mother in her prison cell, awaiting a trial. The essential mystery of her life  spins every other character into frenzies of lie, fear, anger. Her many stories are intertwined, highly charged with event, often horrific and always climactic.

A rock of resistance, Mother is locked deep inside her memories. Everyone who approaches her believes she is crazy, a condition easier to accept than the complicated truth. Her refrain: “We were all happily hopeless with our full mist day. But the sun just sneaked in with promises. They called it peace talks.” Simultaneously wish and lament, riffs on these phrases drop from her lips throughout the play, encompassing the bitterness of war and its endless aftermath.

Silent Voices also proceeds through traditional song and dance, highlighting and dramatizing major events. The songs exist textually in both Acholi and English, the sound of the original lyrics consistently strengthening the overall intensity. Chilling depictions of the children’s army show them barking out orders intended to humiliate, even kill new recruits. Imbued with born-again Christian slogans, those in charge preach and murder, look for weaknesses in the ranks, euphemistically sending the weak “home.” Young girls are given to commanders as “wives” creating a hierarchy of junior and senior spouses with all the bullying that entails.

How to convey the magnitude of this violence on children? Are they numb with shock and grief? The script expresses childish reactions with lines that seem psychologically inadequate. Many, we must believe, have simply become hardened.

After some of these scenes, the play reminds us that we are, in fact, witnessing a re-enactment at the Child Soldiers Rehabilitation Centre. This is clever drama that mixes make-believe with actuality to express the emotional, imaginative and political complexity of its subject. Stage directions insist that “the audience must always be addressed as part of the different groups,” ensuring that no-one escapes responsibility for what is happening whether “rebels, community or police attendants at a court hearing.”

Past constantly infects present as we glimpse the double lives led by the play’s main characters, all of whom are both innocent and guilty. Evidence reveals that Mother was involved in the kidnapping of a six-year-old. For her crime, Mother was beaten by neighbours and sent to prison.

We learn Mother’s back story—how “once upon a time she knew heaven” first in her father’s house, then with her new husband, “dancing powerfully” to epic poetry recitations. During a prison interrogation scene, we learn that Mother had herself been abducted as a girl, becoming wife number 25 of 66, and that her son, a baby born in captivity, was son 6 of 12 sons and 22 daughters.

Mother insists that her ritual be performed and it is. Priests in white robes and purple sashes carry small covered pots containing the cut up bodies of murdered children. Mother cries out in maternal guilt, “I killed them all! All the missing children!”

Inexorably, the play reveals that perpetrators and victims are related, both biologically and symbolically. Hence, the aptness of doubling characters who play both brainwashed children in a rebel army and the scarred adults of a truth and reconciliation process that seems to benefit no one.

In the final scene, the core idea is enunciated by Mother’s lawyer who informs us that a peace agreement was reached and that Mato Oput—the ceremonial drinking of the bitter root—was performed. Rebel leaders congratulated themselves but nobody bothered to consult the victims. The defence lawyer notes that in the face of such horrors, the mind can only retreat into madness; that is, Mother’s plea of innocence on the basis of insanity. However, in order for Mother to “gain full guilt,” the play returns briefly to her ancestral home where we witness the “rape of fathers, mothers, sons and daughters.” At the trial, Mother’s decimated family fills the stage singing the desperate refrain, “What about us?”

In the courtroom, Mother accuses everyone of complicity and demands they give their individual testimony, be allowed to tell their story. How does a victim who has lost everything forgive the person who has gained all? Mother laments: “I was happily hopeless with my full mist day. Then the sun peaked in with promises and disappeared almost immediately.” The play ends with victim voices filling the stage: “What about me? What about us? What about now?”

This volume is an important one for the voices of African women playwrights. The theatrical information it contains should be invaluable to directors, companies and festivals interested in producing the work it features.

*Patricia Keeney is a theatre critic, novelist and poet based in Toronto. She has been teaching Literature and Creative Writing at York University in Toronto for more than 30 years and has lived and worked in South Africa, Nigeria and Egypt spending additional time in several other parts of the continent. Her acclaimed recent novel, One Man Dancing, is set primarily in the Uganda of dictator Idi Amin and looks closely at the protest work of the Abafumi theatre company of Robert Serumaga.