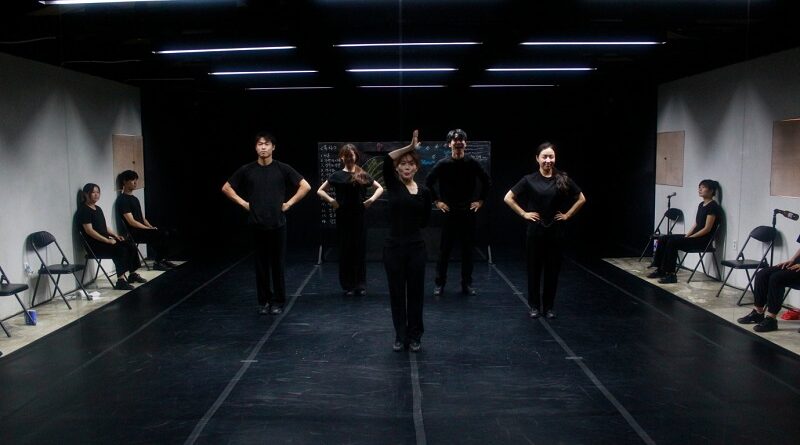 Can theatre survive the pandemic era? If flattening the curve does not mean the end of COVID-19, and pandemics caused by different kinds of viruses become an inevitable part of our future, how should the theatre community navigate its way forward? If we face another situation where theatres are forced to shut down or performances with a live audience are restricted, should we all stop again? A local Korean theatre company has flatly said “no” to this idea and decided to explore a sustainable theatre model that could work in the COVID-19 era by tweaking how theatre works. Theatre Group Sungbukdong Beedulgee (SB)’s experiment involves a standard theatrical approach that examines non-contact interactions within contact interactions, where the two elements are complementary rather than in competition. This paper focuses on directing and acting techniques maximizing Bertolt Brecht’s concept of alienation with particular reference to SB’s Brecht’s Alienation Effect.
Keywords: COVID-19 theatre project, pandemic-era theatre, Bertolt Brecht, alienation effect, Sungbukdong Beedulgee

The three-part COVID-19 Emergency Project consists of a series of immunity-boosting performing art experiments that illustrate SB’s strong desire to discuss the pandemic and its aggressive reflection of the keywords popular in the age of COVID-19: pandemic, non-contact, infection, disaster, environment, ecology and survival.

Each performance’s plot is as follows: The first piece is titled The Quarantine Menagerie, a timely twist on Tennessee Williams’s The Glass Menagerie. The play, intended for a limited live audience per performance of up to seven people, features actors in protective suits. Amanda, Tom and Laura run a theatre company. Director Amanda continues to question how to put on a play amid the virus crisis. Laura feels hopeless that her disability prevents her from performing in front of the audience, while Tom pleads them to stop the negative thoughts and look forward to a post-pandemic future.

The third piece (the second will be discussed later), Wildlife Documentary: Theatre is a documentary chronicling actors’ experiences from the beginning of the outbreak early this year until now, including practices and cancellations and rescheduled shows. One of the interesting elements of this play is the narrator (director) who stands between the stage and the audience with his back facing them. The way he narrates a scene while keeping his eyes fixed on the stage resembles the act of dubbing. At the same time, it is an attempt to avoid spreading airborne droplets to audience members, an acting method tailored to fit the constraints of the COVID-19 era. The trilogy finds the justification for presenting live shows in these uncertain times by embracing the changes brought on by the coronavirus in its production and acting.

Let’s talk about the second part of the trilogy. According to director Hyun Tak Kim, the idea for Brecht’s Alienation Effect came about when the term “social distancing,” the new buzzword during the current pandemic, reminded him of Bertolt Brecht’s theatrical mode of “distanciation” (or “alienation”). The aesthetic concept of alienation, which is designed to ensure the audience remains objective and distant from emotional involvement, is elaborated and visualized via physical distancing, a precautionary measure of maintaining enough distance to keep infection at bay. Therefore, the distance between the actor and the audience, between the stage and the auditorium, between the audience members and between the actors are all a practice of both theatrical and social distancing. The actors as well as the audience members leave empty seats to their sides, in compliance to social distancing guidelines. There is a huge transparent film separating the stage from the auditorium. It protects the audience from droplets of saliva or sweat of the actors in a small space, creating an optimized environment for a theatre experience in the midst of the coronavirus pandemic. If Brecht wanted the audience to make rational judgements about the reality by relying on the aesthetic concept of alienation, the practice of distancing in Kim’s play is a theatrical strategy that serves as a constant reminder of “distance.”

The notion of distance is also evident in the actions the actors perform. A case in point is the opening scene of the play where audience members enter. When the doors to the theatre open, they see the actors sitting in the audience seats. Standing in a loose line up, people enter one by one—after all, there are only thirteen seats available in the auditorium—as they are greeted by the cheering actors, who then give their seats away and move to the stage on the other side of the transparent film wall. Although these entrances and exits are made in an intimate and lighthearted manner, the distance for safety is never compromised, as the play captures tableau-like moments of everyday life in the time of the pandemic.

A Thesis on Brecht

The title Brecht’s Alienation Effect transparently suggests the play’s content and form. It literally features a series of directing and acting experiments that maximize Brecht’s alienation effect, which together take the form of a thesis. Scenes progress in the order of the table of contents written on the blackboard: 1. Introduction; 2. Use of gamyeon—When you go to the market; 3. Influence from Beijing opera; 4. Historification; 5. Alienation Effect; 6. Gestus (social gesture); 7. Self-introduction technique; 8. Influence from traditional Japanese theatre Noh; 9. What does “epic” mean?; 10. Introduction of songs; 11. Use of the fourth wall (Traditional Korean mask dance Cheoyongmu); 12. Conclusions; and 13. References.

The theoretical and aesthetic concepts of Brecht’s epic theatre are presented as scenes that justify the timeliness and relevance of his style of alienation in the time of COVID-19, rather than as a theatrical proof of the German playwright. Consequently, despite the gravitas of the title, the play is easily accessible by anyone regardless of prior knowledge of Brecht’s works.

While Brecht’s life and theatrical theories are quoted, translated and narrated, they are mostly arbitrarily interpreted/stretched or described as an intentional parody or satire in the contemporary context of COVID-19 and infectious disease. The sheer gap between the theory and the interpretation, and between the phenomenon and the satire only adds to the theatrical humor. Here are some of the key scenes.

Scene 2. “Use of gamyeon”resorts to a play with the word “gamyeon,” which in Korean both means “mask” and “When you go.” The actors play a game that starts with a chant “When you go to the market, what animals do you see?” alluding to the wild animal trade in a wet market in the city of Wuhan, China, where COVID-19 is believed to have originated.

Scene 3. “Influence from Beijing opera”borrows elements of Beijing opera for a parody of a scene from the movie Batman, where Batman and Joker chase down the pangolin (bat), once suggested as a possible intermediary host of the virus. By doing so, the scene provides fragments of information about the source of the pandemic.

Scene 4. “Historical painting” is a puppetry performance and a modern day retelling of Oedipus Rex, where Oedipus contracts COVID-19, instead of a plague, and passes it on to his mother/wife Jocasta. Jocasta develops a fever, and the prophecy of infection, not incest, is fulfilled when King Coronavirus (Oedipus) stabs her to death. King Oedipus of ancient Greece and King Coronavirus of 2020 are both helpless in the hands of fate, but the latter’s powerlessness is accentuated by the actors who perform without emotion like string marionettes, controlled and voiced by a puppeteer.

Following scene five with the telling title “Alienation Effect,” scene 6 also resorts to a popular brechtian term ““Gestus” (social gesture),where actors perform a synchronized choreography to the children’s song “Baby Shark,” which transitions into an election campaign song encouraging people to vote for candidate number 2 and then into a hand hygiene song to prevent COVID-19. The hands’ movements appear similar, but as their gestus changes, the songs take on entirely different meanings.

Scene 7. Self-introduction technique features an actress recounting her journey back from the U.K. where she studied, including her struggle to fly home following the coronavirus outbreak and a self-quarantine after she landed in Korea. As she explains the story in English, another actor pretends to translate her words into Korean, when she actually plays on the phonics of English and Korean words to draw a subtle parallel with of Brecht’s life in exile in the context of cross-border travel and isolation during the pandemic.

All in all, the play is a celebration of free association and imagination inspired by Brecht and a whimsical manifestation of the significance and relevance of his works in contemporary time and space, rather than a proof of his (theatrical) theory.

At first glance, the sporadic placement of unconstrained scenes appears unfit for the play’s overall thesis format. But the play manages to interweave individual scenes logically and touch upon the issues facing us today without ever deviating from the central keywords including COVID-19, distancing, infectious disease and environment. For example, in the “Self-introduction” scene, when the actress says she happened to learn about the traditional Japanese theatre Noh from a YouTube video she watched during self-quarantine, she makes a smooth transition into the idea that Brecht was heavily influenced by Noh.

The next scene, “Influence from traditional Japanese theatre Noh,”then begins in a smooth sequential manner. The scene is a parody of a popular Korean TV series titled Stairs to Paradise set against the backdrop of the rhythms of Noh theatre created by makeshift instruments from everyday objects such as a detergent box and a beer bottle. Two men—one from Korea and the other from Japan—compete to win the heart of a woman named “Dokdo.” Despite the melodramatic plot lines, the slow and stylized acting by the actors and musicians sheds new light on the sentimentality commonly found in soap operas. As a result, the scene successfully implements Brecht’s technique of emotionally detaching the audience. At the same time, it is a call to reflect upon the geopolitical landscape surrounding Korea before and after the coronavirus outbreak, as it contains references to a series of developments in Korea-Japan relations, such as territorial disputes over Korea’s easternmost islets of Dokdo, Korean boycott of Japanese clothing brand Uniqlo and Japan’s export curbs on high-tech materials including hydrogen fluoride.

Theatre Group Sungbukdong Beedulgee’s thesis-writing once again explicitly extends beyond Brecht’s theatrical world in the “Conclusions” scene of the play. The goal of the alienation experiment is to win the battle against COVID-19 and to ensure the sustainability of theatre during the pandemic. In the final scene, all cast members lip-sync in unison to the song “Evergreen Tree,” in an apparent attempt to prevent respiratory droplets from spreading. As the popular protest song closes with solemn lyrics: “A long and treacherous road may lie ahead, but we will learn to endure and win in the end,” an actress steps out and addresses the audience: “I pay tribute to the commitment of medical workers and the cooperation of citizens with quarantine measures.” The out-of-the-blue parody of the message by the head of Central Disease Control Headquarters, one who inarguably is the most reliable figure in the nation now, is the finishing touch of SB’s theatrical argument that Brecht deserves due attention in the current pandemic.

Marked by Director Hyun Tak Kim’s signature hilarious parodies and creative humor, Brecht’s Alienation Effect is a short but satisfying getaway to beat the corona blues. The skillful touch of the director as well as the vocal dexterity and acting talent of the young performers are to credit for this. Kim’s clever interpretation of Brecht is by far the most noteworthy effort among many COVID-19 inspired theatrical experiments.

*Jisoo Nam is a member of the Korean Association of Theatre Critics and a lecturer in the Drama Department of Dongguk University, Seoul, South Korea. Her research interests include post-dramatic and documentary theatre. She has published a book titled New Documentary Theatre (2017) in Korean.