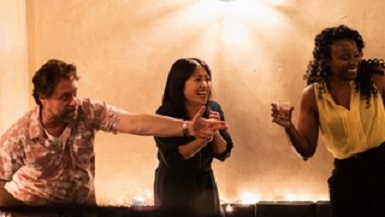 Theatre in the Dark: Carpe Diem. Produced by This is not a Theatre Company. Conceived and directed by Erin B. Mee at TheatreLab, New York. Opened 8 September 2019.

New York’s most important contribution to the theatre lies in its avant-garde. It nurtures daring, creative productions in small venues, and it cultivates new forms.These productions aren’t always successful—but we always have something to learn from them. Here are three interesting productions I saw in 2019.

A Performance for One is a ten-minute performance—a sort of performance—from Untitled Theatre Company #61, conceived by Edward Einhorn and Yvonne Roen, and written and directed by Mr. Einhorn. It’s designed for an audience of, well, one. He sits in a small space with the performer—in my case Ms. Roen—who speaks to him for nearly ten minutes about her memory of her father’s hands. It’s not actually her memory, she points out, but the memory of the writer, Edward Einhorn. But “the writer,” she tells her audience, “has abandoned us.”

There’s a lovely passage about this memory becoming our memory. She speaks of the role of the audience, the audience as performer, experiencing the actress’ experience of the performance, as she experiences his.

The audience member, who is sitting nearly knee-to-knee across from the actress, is invited to look at her eyes, or her face, or her hands. He is invited to speak. Ms. Roen has a wonderful, living connection with her audience.

I asked Edward Einhorn how he came to write the piece. His reply:

A Performance for One is intriguing for the theatre practitioner, less so for the civilian, who must be seduced into accepting a daring conceit like this. It’s too academic. What’s more, I spoke once during the actress’s monologue, but my comment was ignored. It’s surprising that Ms. Roen passed up the opportunity to create a bespoke, improvised event with me. Ten minutes isn’t enough for us to identify our response to the event, but the audience is invited to a second performance.

Theatre in the Dark: Carpe Diem is conceived and directed by Erin B. Mee and produced by her company, This is not a Theatre Company, at the TheatreLab space, off-off-Broadway.

For this show, audience members are blindfolded and then led into the theatre, which, we learn later, is a large room with tables and chairs by them, as if for dinner. As we sit, we’re led through experience a series of olfactory, gustatory, aural and sometimes tactile experiences, in ten “scenes.” In each scene, something to eat or to drink is placed in our hands, and a scent is released in the room.

In addition, we hear either recorded voice or music in each scene—The Love Song of J. Alfred Prufrock by T.S. Eliot; To the Virgins, to Make Much of Time by Robert Herrick (“Gather ye rosebuds while ye may”); whimsical, almost nonsensical dialogue; a whisper in our ear. And sometimes we feel the light sensation of something touching us, like a feather.

Ms. Mee relates the production to the Indian concept of rasa—translated as “flavor,” “essence” or “extract,” and applied to the performing arts. When the show was presented in India, Ms. Mee told the Indian Express that it “literalize the notion of rasa.” She explained that just as different combinations of food elicit different tastes, so do they produce different combinations of emotions. In this show, she expands on this idea to include sound and touch.

This concept is refreshing and interesting. It could be exciting if it were more developed. It’s fascinating to the theatre professional, but Ms. Mee’s concept is so academic that it leaves the general audience behind. For one thing, the swift succession of scenes lacks gravity. Each scene—each taste—needs to be framed in time; we need literally to cleanse our palate, like at a wine tasting, and the scenes need to progress in a way that we can comprehend.

Is this theatre? It certainly stretches the definition of theatre to mean something it hasn’t meant before. But if not us, then who?

The show’s best moment, though, creates a lovely metaphysical metaphor: the lights are turned on while we’re still blindfolded so that we know that there’s light but we can’t see anything.

The future of the theatre lies largely in immersive theatre. Sea Dog Theatre has produced a very interesting immersive production called Catastrophe Club. It’s written by David Burnam and directed by Shaun Fauntleroy—in both cases quite well—and produced at a location undisclosed until the day before the individual audience member sees it. You get an email telling you where to report. Very intriguing . . .

The small audience nearly surrounds the small main playing area. The lighting is suitably harsh. The given year is 2520. We’re welcomed by our hostess, Ruth: “Hello, criminal,” she says. Peaceful assembly, it seems, is outlawed in 2520: “The last time there was an infraction for public congregation was 25 years ago. It was a wedding.”

That’s the outer frame of the play: we’ve assembled here to watch the inner frame: four simulated people from the year 2019. Simulated, but based on “real” people, climate scientists, who videoed an evening they spent together, the evening we’re watching, in a space very much like the one we’re in. They chat about nothing specific, sniff cocaine, do some stand-up comedy for our entertainment and discuss the climate crisis while they wait for a mysterious phone call. We’re there with them. They’re educated scientists, but their discussion borders on cryptic, paranoid conspiracy theory: “Some night is going to be the last night of civilization.”

Ruth, it seems, has discovered their video 500 years later and recreated the evening by programming these simulations who are acting it out for us. “This is my life’s work,” she tells us, “to bring these old people to life. . . . I stayed as true as I could to what they left behind.”

The characteristics of this particular 2520 utopia are revealed throughout the show in delayed exposition, and part of the fun is piecing together these hints. Ruth has several revealing lines: “Trust is an outdated technology because we have certainty.” “Disease is barely heard of. . . . We scrub the memories of the dead.” “I struggle to make sense of the pain these people lived on.”

Only once does she express any real anxiety about holding this verboten gathering: “They’ll come to shut me down,” she says cryptically. And she has two mysterious lines regarding the present-day frame we’re watching: “I want to say to them Run!” and “The world is ending.” Maybe they aren’t so paranoid after all. Or we.

In the play’s best moments, the playwright plays with the tension between the two frames very nicely. Ruth orders “Halt” and “Resume” to stop and to animate her simulations, but sometimes they malfunction.

In its worst moment, two of our friends slide into the bathroom to have sex. First of all, that’s disgusting. Moreover, the actors stand in a corner of the playing area when they’re supposed to be in the bathroom, and the show breaks the convention—that this is the real space—that it’s so carefully set up.

Indeed, the specifics of the conceit—our relationship to the “old people”—are sometimes murky. The company needs to clarify this style, this fictional actualism.

The other problem is with the script. The inner frame—the stage life of the four climate scientists—has no drama, no story. There are events, but they have no arc.

This production is nonetheless important. Its conceit is intriguing and its dialogue is skillful—one character even quotes from The Book of Ruth. The ending—when Ruth and the four scientists co-exist in time—is very nice indeed, and exploits the script’s clever design.

*Steve Capra has worked extensively as actor, director and producer, most notably for Judith Malina and The Living Theatre. His plays have appeared in New York and the U.K. His book, Theatre Voices, contains interviews with leaders in the American and British theatre. His reviews are found at www.newyorkcritic.org.