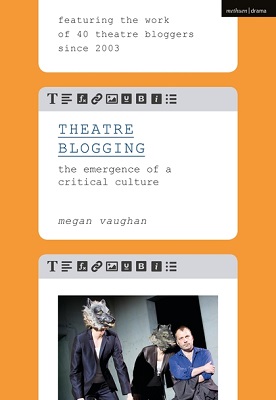 Scan your eyes over the footnotes in this timely survey of online criticism. You’ll spot a pattern. One says: “In 2009, all of JournalSpace’s data, including every single blog hosted on it, was deleted by a disgruntled employee.” Another reads: “This post is now lost,” and another: “No longer online.”

Elsewhere, talking about a provocative London blog called Encore, author Megan Vaughan writes: “Much of these later posts were lost when the hosting lapsed.”

As the tech-savvy Vaughan might have put it herself, the space where so much vital theatrical commentary once sat is now:

For anyone concerned about the historical record, such disappearances are troubling. The internet is so pervasive we forget things could be deleted as quickly as they arrived. For the future archivist trying to piece together theatrical discussions from the start of the twenty-first century, our ultra-connected world might actually look more like a second dark age. All it takes is a hasty delete key, an unpaid ISP bill or a technological upgrade and the record is wiped.

This is one reason Vaughan’s book is so welcome. Her aim, to borrow her subtitle, is to mark “the emergence of a critical culture,” one made possible by online tools such as Blogger (1999) that allowed even those without coding skills to share their thoughts in online journals. She identifies 2003 as a theatre-blogging year zero. It was then that established blogger Laura Axelrod, a playwright and actor, was drawn into a circle of New York bloggers, including director Isaac Butler and playwright George Hunka, who began linking to each other and having theatre-related discussions in public. They created an online scene. Similar groupings emerged in London and Australia.

Vaughan is alive to the irony of commemorating the interactive internet, with its hyperlinks and embedded videos, in a boring old paper-and-ink book, but she also sees the value in taking a real-world snapshot, fixed in 270 pages, of an online culture that is as ephemeral as it is uncontainable. More than this, she correctly observes that this was a special moment in the history of theatre criticism, one that ushered in a new generation of voices, whose politics, aesthetics and even manner of writing has frequently stood in opposition to what Vaughan calls the “paternalistic and parochial” values of traditional newspaper criticism.

There’s room for debate here. On the one hand, not all mainstream media criticism is paternalistic and parochial. On the other, as Vaughan acknowledges, many of the supposedly radical new generation have come from much the same educated, privileged class as the old guard who were famously characterised by director Nicholas Hytner as “dead white men.” The internet might feel fresher, sharper and more democratic—and Vaughan does an excellent job at highlighting the areas where that is true—but it can be conservative too.

It is also in the nature of theatre to be local. Although the internet is global, the most dynamic blogging has been in response to very particular theatre scenes— especially those in London and New York. Take the example of the 2012 production of Three Kingdoms by Simon Stephens, which animated theatre bloggers even as it left many mainstream critics nonplussed. The online commentary Vaughan quotes makes it sounds like a thrilling occasion, but for me, living 400 miles from London’s Lyric Hammersmith where it was staged, it is just another show I didn’t see. Consequently, the claim made by former blogger Matt Trueman that Three Kingdoms would “change the course of British theatre” sounds as parochial as anything printed in a London-centric newspaper.

He’s not even necessarily wrong (although eight years later, I’m still waiting for the shockwaves to reach me in Scotland), it’s just that theatre blogging is not a mass-participation project. The best commentary has emerged when a small group of intelligent writers have talked among themselves about a shared experience that, by its nature, can only ever have had a limited audience. In theory, anyone can join in the discussion, but in practice most people are outside the charmed circle.

Inclusive or not, what’s important is that this kind of discussion was not possible before the twenty-first century. Two-thirds of Vaughan’s book is a compendium of exemplary blogs written by other people, a reflection of her belief in collaboration and non-hierarchical structures. You can imagine some of those blogs being published in the traditional media, but for the most part, they have a quality of their own. On a surface level, that might mean non-standard spelling, Twitter-friendly abbreviations and emojis, all of which defy the top-down authority of “proper” writing. There is no pretence at objectivity here; it is writing aware of its partiality, happy to be messy, emotional, human.

On a structural level, blogs have a degree of immediacy, responsiveness and reflexivity that old technology does not allow. In the case of Three Kingdoms, Trueman’s bright and breathless response sits alongside the thoughts of bloggers such as Andrew Haydon, Dan Rebellato and Catherine Love, each of them cross-referencing the other and building on a foundation of ideas. When Sarah Punshon joins in, questioning the production’s sexual politics, her perspective shifts the discussion, causing the others to reflect on an aspect they had glossed over. This is criticism as a collegial activity. The writers are no less assertive than their old-school peers, but they can compromise, change their minds and be open to nuance. A theatre blog doesn’t have to be the last word.

In her selection of blogs, Vaughan also shows how dynamic the internet can be. She focuses on the case of My Name is Rachel Corrie, a monologue about a pro-Palestinian activist, which was abruptly dropped from the schedule at New York Theatre Workshop in 2006. Where once you would have expected the city’s arts reporters to expose this apparent act of censorship, here it was the bloggers, spearheaded by Garrett Eisler, who kept up the more-than-daily pressure on the theatre. Within a single month Eisler alone had published over 100 posts on the subject. Even the fast-paced world of daily newspaper journalism could not match that level of scrutiny.

Vaughan highlights too some of the political voices who might have been marginalised were it not for the internet. Anyone who wants to rail against misogyny, racism and institutional bias can set up a blog today, just like the theatremakers who have gone online to discuss their creative practices without recourse to specialist theatre magazines.

As well as speed, interactivity and access, blogging can break free of the conventions of theatre criticism. Although too much online writing simply apes the format of newspaper reviews, the medium allows creative thinkers—Vaughan included—not only to break the rules but to respond to theatre in a more apposite way. She gives examples of critics using Venn diagrams, rhyming verse and her own Kafkaesque venture into bureaucratic form-filling criticism.

That’s a clue to Vaughan’s bigger interest in what she calls “outsider criticism”. Although the bulk of the book is given over to people who would otherwise be regarded as insiders, she is drawn to the voice of the “unedited, the informal, the amateur and the autonomous.” In the DIY spirit of the punk fanzine, the internet upturns the hierarchy of writer and reader and makes space for bottom-up criticism. We should be grateful to Vaughan for being on hand to take such a stimulating snapshot before the bits and bytes melt into techno-oblivion.

*Mark Fisher is a theatre critic for the Guardian, a former editor of the List magazine and a freelance writer. He is the author of The Edinburgh Fringe Survival Guide (Bloomsbury) and How to Write About Theatre (Bloomsbury).

One thought on “Theatre Blogging: The Emergence of a Critical Culture”