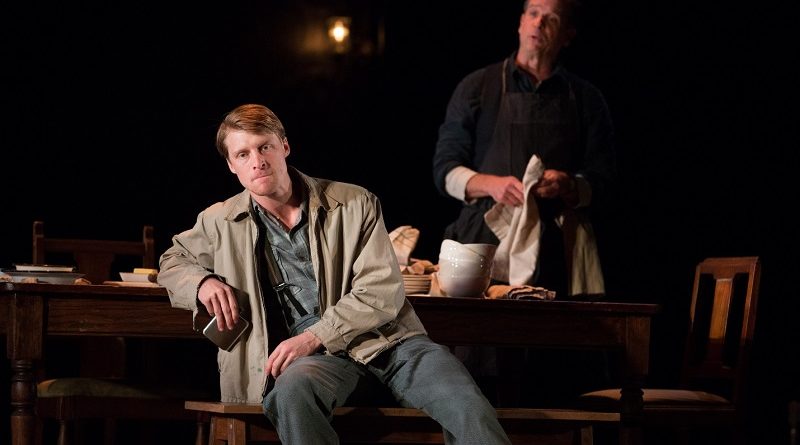 The last live performance I saw before the Covid-19 pandemic shut Toronto’s (and many of the world’s) theatres this past winter was the underwhelming touring production of Summer: The Donna Summer Musical. Like so many jukebox musicals before it, the show uses a tried-and-true formula: a superficial biography of a beloved recording star boasting an array of her greatest hits. Co-created by the Canadian-bred team of director Des McAnuff and choreographer Sergio Trujillo, it follows in the footsteps of their previous jukebox successes, Jersey Boys (about Frankie Valli and the Four Seasons) and Ain’t Too Proud: The Life and Times of The Temptations. It is a formula that continues to reap dividends at the box office, but one that’s also artistically moribund.

However, less than a month earlier in New York, I had seen a promising attempt to rethink and rejuvenate the jukebox genre. Indeed, Jagged Little Pill, the Alanis Morissette musical, already had some critics in raptures. “They Finally Fixed the Jukebox” declared the headline on Jesse Green’s enthusiastic New York Times review of the show, which opened on Broadway in December of 2019.

Well, “finally” is not quite accurate. And it is not entirely fixed, either. But this theatrical reshaping of Canadian-born singer-songwriter Morissette’s cherished 1995 confessional album into a twenty-first-century rock musical about today’s hot-button issues is far more creative than what we have come to expect from the genre. And it could be part of a trend. Even as it was premiering in New York, across the pond in London another brilliant jukebox “fix,” the Bob Dylan-inspired Girl from the North Country, was making its second visit to the West End.

What makes these jukebox musicals so refreshing? Instead of simply celebrating their respective troubadours, they repurpose their songs in imaginative and—especially in the case of Girl from the North Country—revelatory ways. Conor McPherson, the Irish playwright-director who created the latter show, deserves a special thank-you from hardcore Dylan fans for excavating some of the Nobel Prize laureate’s lesser-known and slightly regarded tunes and holding them up to a new light, where their hitherto hidden facets shine.

Diablo Cody, the Academy Award-winning American screenwriter who wrote the book for Jagged Little Pill, tries something similar within a more limited framework. Where McPherson was given access to Dylan’s entire back catalogue spanning six decades, Cody focuses primarily on one seminal album (although she does make use of a handful of other old Morissette songs—among them the hits “Thank U” and “Hands Clean”—and the songwriter also wrote two new ones for the musical). Consciously avoiding any 1990s nostalgia, Cody puts Morissette’s emotionally raw tunes, with their torn-from-a-diary lyrics, into the mouths of contemporary Americans whose problems, in turn, are torn from the daily headlines. Her book checks all the boxes: opioid addiction, porn addiction, racial identity, same-sex relationships, student activism. The plot even turns on a rape incident during a drunken teenage party that can’t help but recall the 2018 Brett Kavanaugh controversy, in which the soon-to-be U.S. Supreme Court judge was accused of sexual assault during his high school years. (In fact, the musical premiered at the American Repertory Theatre four months before the Kavanaugh accusation surfaced.)

The story centres on the Healys, one of those seemingly perfect white middle-class families that, beneath its shiny Christmas-card surface, is roiling with dysfunction. The mother, Mary Jane, is hooked on painkillers that numb a long-hidden trauma. The father, Steve, is finding an online outlet for his frustrated libido. Frankie, their adopted African-American daughter, is struggling with both her racial and sexual identities, while rebelling against parental disapproval. As for their Harvard-bound son Nick, the family’s source of pride, well, it seems he was at that party where the rape took place . . .

You may notice an eerie similarity to the family in another contemporary rock musical, the 2010 Pulitzer Prize winner Next to Normal, with its meds-taking mom, frustrated dad, angry sis and golden-boy son. But if there is any borrowing, it’s above-board: Jagged Little Pill’s musical supervisor, orchestrator and arranger is Tom Kitt, the composer of Next to Normal. And to be fair, this material is also Cody’s screenwriting terrain, from the gutsy misfit teen (Juno) to the troubled mother (United States of Tara).

Some of Cody’s libretto is fashioned to fit Morissette’s lyrics: the pleading love song “Mary Jane” now becomes Steve’s attempt to reach out to his wife, and that bitter message to an ex-lover, “You Oughta Know,” serves as the heartbroken response from Frankie’s girlfriend, Jo, after Frankie becomes romantically involved with a guy. (The latter number is the musical’s big showstopper, delivered with acid-washed fury by Lauren Patten in the Broadway production.)

Morissette’s writing can sometimes sound embarrassingly (or endearingly, depending on your viewpoint) like awkward adolescent poetry—she was, after all, barely out of her teens when she penned the Jagged Little Pill album. Cody takes advantage of that, too—most amusingly in her use of Morissette’s much-pilloried song, “Ironic,” which is notorious for its clear misunderstanding of irony. Here, the lyric becomes a composition by Frankie, read aloud to her high school English class, where her fellow students continually call her out for her failed attempts at ironic metaphors. But even when the lyrics do not quite jibe with the story being told onstage, the songs still connect on the emotional level. It is as though Cody’s characters are continually looking to Morissette’s writing to articulate their feelings, much the same way fans of the recording artist make her songs their own.

McPherson similarly employs Dylan’s music largely to express emotions and establish moods, rather than to feed his show’s narrative. After all, Dylan’s songs are often crammed with narratives themselves, overflowing with distinctive scenarios and images, so that they defy easy use as generalized expressions of feeling in the way that, say, Carole King’s do in the jukebox musical Beautiful. In Girl from the North Country, McPherson acknowledges this, instead suggesting that Dylan’s songs are other, complementary tales to the one the playwright sets out to tell.

That tale, like Jagged Little Pill’s, involves a family, the Laines, who run a failing guesthouse in Depression-era Duluth, Minnesota (Dylan’s birthplace). Nick Laine is trying to keep the property from foreclosure while dealing with a mentally ill wife, Elizabeth, an alcoholic writer son, Gene (note the homage to Eugene O’Neill), and a 19-year-old daughter, Marianne, who is pregnant and won’t reveal the father. Like Jagged’s Frankie, Marianne is also African-American, a foundling adopted by the Laines. Over the course of the drama, the family’s lives entwine with those of their boarders, including a young widow, a preacher-cum-huckster and a Black boxer fresh from a stint behind bars (cue “Hurricane,” Dylan’s searing ballad about the unjustly imprisoned prizefighter Rubin Carter).

Where the Morissette musical is relentlessly contemporary, Girl from the North Country gives us an earlier America in crisis, evoking the dustbowl 1930s depicted by Dylan’s mentor, Woody Guthrie. And Dylan’s songs, steeped in American roots music, are the perfect fit. McPherson makes particular use of the songwriter’s less-familiar country-, R&B- and gospel-flavoured tunes, especially those from such minor mid-career albums as Street-Legal and Infidels. But there are some “greatest hits,” too, and coincidentally one of the showstopping numbers is Elizabeth’s wild rendition of “Like a Rolling Stone,” that epic, withering put-down which could be the prototype for Morissette’s “You Oughta Know.”

If we are handing out credit for “fixing” the jukebox, McPherson has the edge: Girl from the North Country premiered to acclaim at London’s Old Vic Theatre in 2017, a year before Jagged Little Pill’s debut at ART. It has since played in the West End and Toronto (where I saw it), had an Off-Broadway run at New York’s Public Theatre and opened on Broadway in March of 2020, just before the pandemic hit town.

This is not to suggest that there have not been earlier successful variations on the jukebox genre. The massively popular Mamma Mia!, which premiered in 1999, cleverly married the ABBA oeuvre to a frothy romantic comedy, paving the way for many similar combinations—although up to now, most of the fictional libretti have tended to be similarly lightweight if not simply fatuous. Or, on occasion, they’ve erred in the other direction, as was the case a few years back with the late David Bowie’s dazzling but enigmatic Lazarus, written by another Irishman, Enda Walsh, and directed by avant-garde darling Ivo van Hove.

Jagged Little Pill and Girl from the North Country, in contrast, are compelling dramas that stand on their own. If I have an issue with either, it would only be with Jagged Little Pill’s overeager efforts to tap into the zeitgeist. Music aside, its libretto does not quite measure up to those of its obvious antecedents, not only Kitt and Brian Yorkey’s Next to Normal, but also Lisa Kron and Jeanine Tesori’s Fun Home and Dear Evan Hansen by that white-hot duo, Benj Pasek and Justin Paul. All three are strikingly contemporary American musicals that have dealt with dark and difficult issues—and done it with original scores as well.

*Martin Morrow is the Past President of the Canadian Theatre Critics Association and a two-time winner of Canada’s Nathan Cohen Award for excellence in critical writing. He has served as chief theatre critic of the Calgary Herald (1988–2000), Fast Forward Weekly (2003–06) and The Grid (2011–14). Since 2010, he has been a theatre critic and arts writer for The Globe and Mail, Canada’s national newspaper. He is also the author of Wild Theatre: The History of One Yellow Rabbit, a chronicle of the seminal Canadian avant-garde company.