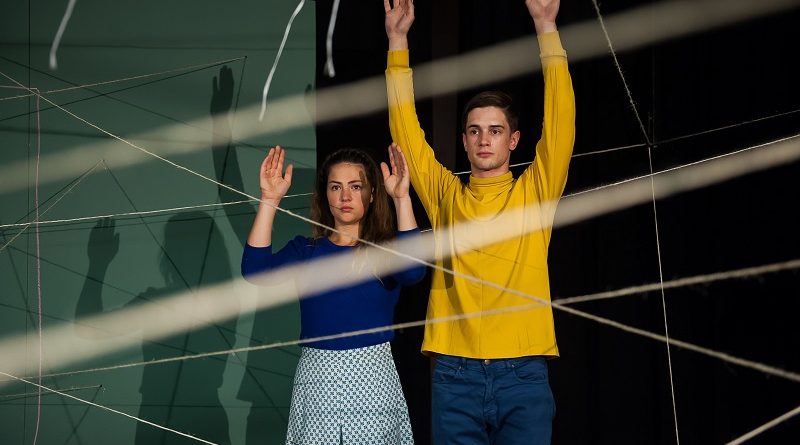 Us/Them. Written and directed by Carly Wijs. Cast: Gytha Parmentier, Roman Van Houtven. Created with Thomas Vantuycom. Presented by Bronks and Richard Jordan Productions with Theatre Royal Plymouth and Big in Belgium in association with Summerhall as part of the 2019-2020 Off-Mirvish Theatre Season in Toronto, Canada.

Two agile teenagers fill the stage with frantic activity and talk. Focusing fiercely on an urgent task, they draw chalk lines over floor and walls. Lines to depict various buildings and spaces—the cafeteria, the gym, the playground. And they argue frantically about accuracy. This belongs there. No. That belongs here. This wall was higher. No. It was wider. They interrupt each other. They leap over and under and bump into each other attempting furiously to be as precise as possible in their reconstruction, to create the truest description of what they know, of what they must get exactly right.

Tirelessly, they map out their school and yard, their town and forest. This is a magical place that borders onto Chechnya, which by comparison they characterize as all flat boring fields. Eagerly, they tell us about their butcher, the wood-chopper, the farmer with his tractor, friends and schoolmates, fathers and mothers—who in Chechnya, according to gossip have moustaches.

There is humour in the casual, awkward competition between them, energetically choreographed to look bumptiously natural in a sweaty, gawky careless way. There is also humour in the catch-up repetitions of location and measurement. And appeal in deliberately pronounced syllables stressing consonants that further accentuate determination, the concentration required for a crucial task.

It is September 1 and the first day of school. We learn that last year’s school opening was hot enough to cause fainting. So this year, everybody gets a bottle of water. But it was still stifling, the performers tell us. References to uncomfortably high temperatures are made throughout the show. Parmentier and Houtven take us through routine activities. For example, the assembly where they sing rousing national songs with amateur enthusiasm, responding good-naturedly to each other. Animated further by full-throated recordings of the same, they beam national pride at the audience.

Almost imperceptibly the mood changes, actualizing a creeping unease, kept at bay up to this point by inventive stage business.

Now, lines of chalk thicken into lines of string pulled taut—through the air from corner to corner, ceiling to floor, side to side and up and down. The movement is agitated but definite. String theory on steroids? A theory of everything to explain everything?

What is happening and why? A menacing mystery lies at the heart of this spirited recreation. As they hop and leap through their visualization of entrapment and entanglement, Parmentier and Van Houtven drop in unsettling scraps of information.

They have been told to keep their hands up. Interminably. They perspire profusely and want to take their clothes off. She climbs out of her skirt. He reluctantly removes his t-shirt causing her to giggle at his nipples. They then launch into a description and mime of chilling terrorist activities. One terrorist must keep his foot on an undetonated bomb without moving a muscle or blinking an eye for hours at a time. When his shift is over the next terrorist must duplicate his exact position with unflinching precision. Verbal descriptions become more extreme. And more contradictory. The performers dream of giraffes in the sky, argue over whether the ceiling fell or didn’t fall.

The real life event that catalyzed Us/Them took place in September of 2004 when “a group of terrorists stormed a school in Beslan, Russia, taking 1200 people hostage, mainly children and their parents or grandparents. The ensuing siege lasted 3 days ending in a chaotic rescue attempt by Russian security forces which left 330 dead.”

Us/Them explores the way youngsters deal with traumatic situations. Director Carly Wijs believes children absorb and understand events more neutrally than adults, without emotion. Often innocent of real calamity, they lack the experience of disaster to inform their response. If catastrophic events do exist, children handle them factually, objectively, because such crises are not yet subjectively connected to these young lives.

Asked in 2013 by the Brussels-based BRONKS theatre for young audiences, to create a performance, director Wijs spoke to her 8-year-old son about the terrorist attack in a Nairobi shopping mall that had just happened. She was amazed at how aloof he seemed from it. Thinking about ages and stages of response to disaster, so dramatized by the media, she also watched a BBC documentary called Children of Beslan in which the story of the siege is told by the children held hostage. They were at great pains to relate events as accurately as possible.

Of course this is a coping mechanism. Accuracy and repetition bring comfort, some measure of control. There is also a fleeing from ultimate horror into imagination, creating both confusion and some sense of escape. In Us/Them, ‘armies of fathers’ will come to the rescue; balloons pop softly, to indicate the detonation of bombs. The girl dies. Or does she expire into her fantasy, having wanted always to be in the spotlight? Is it either? Is it both? We are in the world of emotional strategizing at an early stage. We are in the realm of imagination and dream.

Being a two-hander with minimal set, this ideal festival production premiered in Dutch at BRONKS Theatre in Brussels on September 27, 2014. Receiving its UK premiere in English at Summerhall as part of the Edinburgh Festival Fringe on 3 August 2016, it won a Fringe First award and subsequently transferred to the Dorfman auditorium of the National Theatre, London, on January 16, 2017.

Toronto was likely the last locale on its current itinerary. Us/Them had to close early, along with the blockbuster Hamilton due to the Coronavirus pandemic.In such light, the play’s disaster-coping psychology is particularly fascinating. Eerily timely in this fraught global moment of people panic-buying toilet paper and hand-sanitizer, when walking in the park is a dangerously anti-social if not downright lethal activity, Us/Them briefly offers the blithe insouciance of the young.

But is it dramatically sufficient? At any time? Ultimately not. What are we looking at with this production? A Belgian writer’s view of a Russian child’s view of a deadly hostage-taking by Chechen rebels from16 years ago. The piece leaves one baffled. What are we meant to think/feel? As adult theatre-goers, we want to go deeper. Undo these layers of perception. Get to some of the real politics while trying fully to comprehend the human cost. We need an intellectual centre. This takes writing and dramatic structure. Not just clever acrobatic moves. Or even well researched scraps of response to the actual event. The subject is important. The execution of it is both precocious and shrewd but ultimately confounding.

Us/Them began as theatre for young audiences. There, it is presumably doing some highly sensitive, risky work. And there is perhaps where it should have stayed.In a world theatre context, it is simply a choreographed curiosity.

*Patricia Keeney is an award-winning Canadian theatre and literary critic, as well as a widely-published poet and novelist. Her most recent books are the novel, One Man Dancing, based on the history of Uganda’s legendary Abafumi theatre company and a collection of poetry and contemporary dialogues called Orpheus in Our World, based on the earliest of Greek hymns. Keeney is a longtime Professor of Creative Writing and Literature at Toronto’s York University.