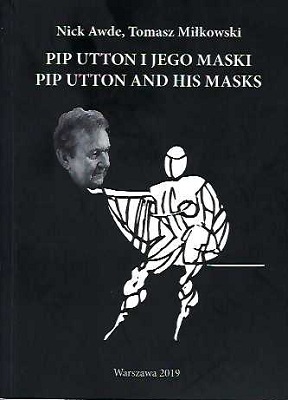 This is volume 16 in a useful Polish monograph series on the art of what is called Monodrama, the current name for what has long been called one-person shows. I have never been quite sure why the critical world really needed this curious term for solo performances, but it has become popular, particularly in parts of eastern Europe.

The series itself (called Little Black Book with Hamlet in its original Polish) was started back in 2007 by the late critic-scholar Andrjez Zurkowski and now includes volumes ranging from Monodrama theory to Monodrama practice to in-depth interviews with well-known Monodramatists and actors specializing in the form.

Most of the volumes exist only in Polish and have therefore been accessible only to those who read that language. This latest volume—focusing on the art of Britain’s Pip Utton—happily appears in both Polish (the first half of the volume) and English (the second half of the volume). The two halves are separate but equal, translations of one another.

For those not familiar with Pip Utton, he is a U.K.-based actor who has been specializing in the form since 1997, when he left a career in business to try his hand on the stage. He has since written a dozen pieces—most no longer than one hour, which have been played in some 26 countries and which have been translated into eight languages. A particular favourite at the Edinburgh Fringe for many seasons, he has also had great popularity in Holland and, as this volume shows, in Poland as well.

His work is clearly satirical and often includes direct banter with the audience. In that sense, one can compare him to artists such as Pieter-Dirk Uys in South Africa and the solo puppeteer Ronnie Burkett in Canada, who do the same type of solo work and who also make direct connections with their audiences. Utton specializes in shows about historical figures including Adolph Hitler, Francis Bacon, Charlie Chaplin, Charles Dickens, Winston Churchill and Maggie Thatcher, among others. Having never seen Utton perform (mea culpa), I can only say that I got a real sense of his work and aesthetic from both the perceptive critical overview written by Polish critic Tomasz Milkowski and the extended interview done with Utton by Nick Awde, a playwright, a sometimes cartoonist and co-editor of London’s The Stage.

Utton comes across in both the overview and the Q and A (as well as in a series of anonymous questions from members of the Wroclaw Theatre Society) as modest, amiable and articulate. He says in one response that the notion of Monodrama itself “is rooted in eastern Europe” (149), and he links it to storytelling. He says frankly that it seems to have grown in recent decades because of simple economics—one actor is cheaper than many actors, and a small show is easier to tour than a large show to festivals.

He notes the work of several others utilizing the form, including Lithuania’s Birute Mat and Alexandras Rubinovas, South Africa’s Kurt Egelhof and Poland’s Mateusz Novak and Violeta Kumar. He says that the form allows him as an actor “the freedom and privilege to speak directly to my audience . . . to look into an audience’s eyes, to make very intimate contact with the audience. . . . An actor cannot do this when he/she spends most of their time talking to fellow performers” (181–2).

There is certainly something to that last comment. If Monodrama begins to be theorized more deeply and starts to spread its histrionic wings into contemporary academe, this sense of audience and intimacy may well prove to be an important starting point.

The series is not easily available, but this volume (ISBN 978-83-954374-0-3) may change that situation. It can also be purchased by directly contacting the Polish Centre of the IATC.

*Don Rubin is Managing Editor of Critical Stages and editor of its Book Review section. He is the series editor of Routledge’s six-volume World Encyclopedia of Contemporary Theatre and founding Editor of the Canadian Theatre Review. He is Professor Emeritus and Senior Scholar in the Department of Theatre at Toronto’s York University.