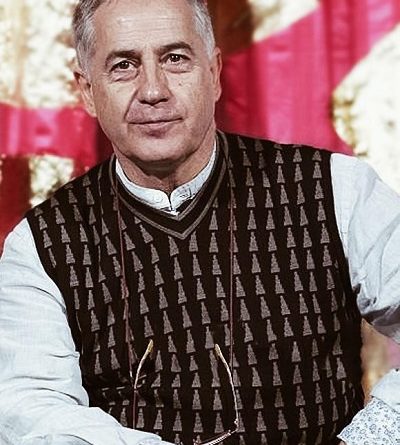 Joan Font was born in 1949, in a town near Barcelona. He trained at the prestigious Jack Lecoq school in Paris. In 1971, together with several Catalan colleagues, some of whom were also Lecoq students, he founded the Comediants theatre group. Comediants is one of the finest examples of the so-called Spanish Independent Theatre. It is also a leading company in international outdoor theatre. The company is renowned for its artistic versatility (working in the fields of theatre, televisión, audiovisual arts and so on).

Comediants has been characterized by an increasing emphasis upon the visual dimension of its productions, as well as a popular, festival atmosphere, and a direct relationship with its audience. Font has always created work which has a strong grounding in popular culture and iconography. Unquestionably, Comediants´ performances in Venice are unforgettable; the Biennale commissioned them to revive its historic production Carnival, for example. There has been similar acclaim for their shows in New York (at Central Station), Bogotá (Plaza Bolívar) and Barcelona (Gaudí’s Park Güell), among many other places.

The documentary Comediants, with the Sun in the Suitcase (2013) gives a good insight into the company’s unique creative tools. Font, whose dynamism and energy are legendary, has provided great doses of fantasy and excitement for several generations of spectators around the world.

Comediants will celebrate its 50th anniversary in 2021. In its very beginnings, Comediants was related to other street theatre troupes such as Bread and Puppet and Odin Teatret. What did they have in common with you? How did the Spanish political context, during the end of Francoism, influence the beginnings of Comediants?

Fifty years ago, our reality was tinged with an ash-grey colour; we lived without full freedom, still under a very active censorship. As members of the Catalan Independent Theatre, Comediants emerged with the desire to transgress, following the example of the most avant-garde European and American theatre of the time, companies such as: Théâtre du Soleil, Bread and Puppet, Odin Teatret and Living Theatre. We were lucky to meet and share experiences with them.

All of us were united by the desire and the need for freedom of creation, the search for our own unique language, the use of new spaces for performances and the occupation of the street as a demand and struggle. We were born in a moment of change, the hippy, green and liberation movements, the discovery of marijuana, sexual liberation and feminism. Comediants was inspired by all these and went on to formulate its own language and its own way of living and understanding life. We are interested in a sensual theatre, what we could call “the festive spirit of existence.”

Since its founding in 1971, Comediants has worked worldwide. Fifty years of experience, thousands of spectators, hundreds of cities and countries visited. Could you point out the company’s most emblematic stage creations?

Non Plus Plis (1972) was the show that prefigured the Comediants’ style:  recovery of popular elements and their dramatization, breaking of the traditional stage and theatre space, commitment, the celebration of life as our main bold plan.

1975 was the year of Franco’s death, and it was as if life started again for us. At that time, we premiered Sarao de Gala, a dance show, an artwork to enjoy. It was no longer just theatre; we sought the active participation of the spectators without barriers or distances, with music being the base of the performance.

At that time, we moved to live in the community at Canet de Mar, a town on the Mediterranean coast. That was a defining fact of our idiosyncrasy, a way of understanding life and a commitment to freedom of creation. We created our workspace in a local theatre called Odeon and opened it to people as a theatre, cinema, dance hall and bar. We premiered Sol, Solet, the artwork that transformed us and opened wide the borders of Europe.

In 1980, at the Venice Biennale, we presented Devils, a great fireworks display, a massive ritual that we have performed on five continents. A year later, we opened the Tàrrega Street Theatre Festival and ran it for four years. Today Tàrrega is still renowned internationally among street arts events.

In 1983, we presented the opening and closing performances at the Avignon Theatre Festival; it was a moment of artistic recognition and fulfillment for Comediants. Then we come to our dream year, 1992. Throughout that year, we performed Devils in the snow during the Winter Olympics in Albertville. The devilish creatures drew with fire and dyed colours, and they created light and shadow on that immense snow canvas. The show made a great impression.

We also created the Cavalcade of the Universal Expo of Seville, which we called The Magic of Time. It was a multidisciplinary and allegorical proposal about the passage of time. There was also that year the Closing Ceremony of the Barcelona ’92 Olympic Games, which was a journey through the creation of the universe, the Earth and humanity: [in that piece] the universe is fire, the centre of the Earth is fire and the passion of the human being is fire. It was a very artisanal and energetic artwork, both in the simultaneity of actions and situations and in the use of space. Comediants would not be understood without its international career, the stage works that have filled theatres around the world and visited large and varied worldwide Festivals.

What are the bases of your unique theatrical language?

Our theatre language is filled with masks of very different conceptions, shapes and styles, including shadow play, physical skills, object theatre, machinery, stage poetry, fantasy, clowning. It is a language that seems to be walking on a hill circus between reality and dreams, and always with live music as the common thread of the emotions.

In our shows, we have addressed topics such as our childhood in It Rains and the Sun Rises, or life and death in Breath. We populate The Night with night owl characters, with love, dreams, the moon, sex.

Tempus was a show about the passing of time. The Thousand and one Nights and Bi were two approaches to other cultures, the Arab and the Chinese. The Book of Beasts was a current bestiary based on a Catalan medieval work. In Great Secret, we always told the same story about love, and so on, until we reached Persephone, a promenade performance that pays homage to death.

Comediants has been able to translate its genuine theatrical language (festive, Mediterranean, sensory) into different performing genres: from street theatre to stage shows, Olympic ceremonies, audiovisual works and even, book-objects. How do you explain that versatility?

Comediants has not only been made up of actors, musicians and dancers, but also professionals from other fields: photographers, designers, technicians, pedagogues, screenwriters, and this has enriched and strengthened our creative diversity.

To understand this process, it is enough to follow the path of Sol, Solet, which was born as a street show in 1978, and, two years later, it was presented indoors in Barcelona’s Gothic Hall. The performance opened with an exhibition, and, at night, we finished the show outside.

Later, in 1983, we presented the book-object Sol, Solet, which received national and international awards. In the same year, we released an album with the music of the show.

Regarding cinema, in 1982, we made a medium-length film, Dream of the Street, in which we recreate a town inhabited by masks, large head-masks, giants and fantastical beings. We have created movies, exhibitions, books, special objects, pedagogical courses, television and workshops. We were always motivated by curiosity, a creative power for our own professional and artistic enrichment.

In this last decade, you have directed numerous opera performances on the international mainstream circuit, especially works by Mozart and Rossini, rediscovering their vitality and stage possibilities. Tell us about that.

My operatic adventure began with Mozart’s Magic Flute in 1999, at the turn of the century and the millennium. I cannot imagine a better entry, since it is about staging a story with wonderful music. It has been a popular opera since its first performances in Vienna, and it connects with my theatrical and visual approach to large-scale performance.

Currently, opera directors also have the role of authors, as the genre is not renewed in terms of new titles. It is up to us to create this “new” approach for today’s audiences by introducing contemporary languages and techniques. It is risky work, but fascinating.

I have directed works by various composers, but, above all, I have specialized in Rossini and his buffe operas: La Cenerentola, L’ Italiana in Algeri and Il barbiere di Siviglia. In 2001, I founded The Little Liceu (linked to Barcelona’s Liceu Opera House) in order to bring the opera closer to family and young audiences. I created adaptations of operas that I had directed, like Little Magic Flute, La Cenerentola and a new dramaturgy, Allegro Vivace. We have also brought opera to the street with Walking Mozart.

After Covid-19, without a doubt, our concept of public space will change. How do you imagine street theatre in the future?

The fear of contagion will make the public space undergo a transformation; we will feel more vulnerable and less secure. Fear is a lousy ally for progress and freedoms. Recovering the street again will be more necessary than ever. It is essential to feel the public space as our second home, to turn it into an agora, a forum.

The street must be a place to experiment, to exchange, to unite, to learn, to experience, to share cultural moments; a place of pleasure, of exhibition of the arts and creativity. It will be necessary to invest many economic resources, [and to draw upon a great deal of] talent and imagination so that the street becomes the location of artistic progress.

In my opinion, public space opens doors to new ways of exercising the business of living, with more respect for our great common home, and where we can all have access to enjoy the pleasure of culture, the arts and education.

*Mercè Saumell holds a PhD in Art History. She is a specialist in contemporary theatre and, more specifically, Catalan devised theatre. She is professor of theatre in the graduate programme (MA and PhD) of Barcelona’s Institut del Teatre. Between 2009 and 2016, she was the director of the university’s Cultural Services (centre for documentation and museum of performing arts, publications and research programs). She is the author of two books on contemporary theatre and has published several articles in international research journals. She was co-organizer of the IFTR (International Federation of Theatre Research), Barcelona 2013. Currently, she is working on an inter-institutional project on the Independent Theatre in Spain (1962–80), led by the Reina Sofia Museum in Madrid.