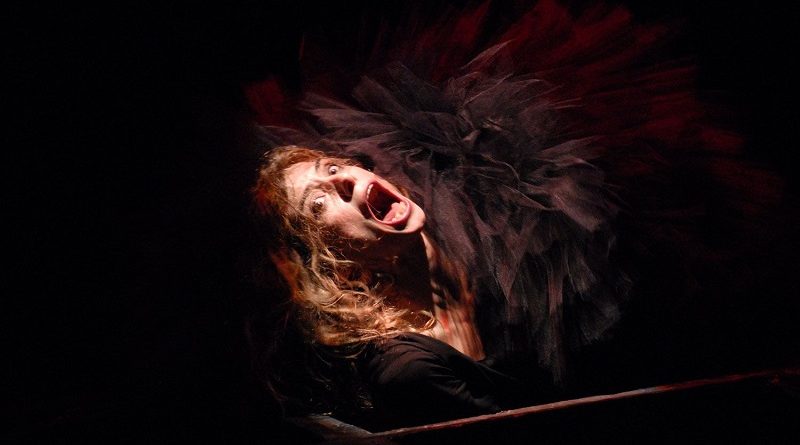 Attis Theatre. Nora, based on A Doll’s House by Henrik Ibsen, adapted and directed by Theodoros Terzopoulos. Winter 2019 to Spring 2020, Athens, Greece.

Two years ago in “The return to Dionysus: A tribute to Theodoros Terzopoulos,” organized by the European Cultural Centre of Delphi in Greece, I embraced Olga Taxidou’s trope of the “Mother Machine” and her assumption that “[the] fascination that tragedy has with mainly monstrous mothers may be the precondition, the grounds of its theatricality” (44); that figures like Medea, Agave and Jocasta can be seen as manifestations of the “Mother Machine,” which activate tragic theatricality. In the case of Theodoros Terzopoulos, I suggested the “Mother-Machine” sets in motion awe-inspiring performances like Bacchae, Antigone, Medeamaterial, Rockaby and Jocasta, impelling them in tragic directions.

The “Mother Machine” creates a caesura, a cesarean section between maternity and natality, birth and rebirth, and it is there that the distinctive aesthetics of Attis Theatre—its aesthetics of Violence and Cruelty, Mourning and Seduction—can be seen to take shape. Among the characteristic women of Attis Theatre who activate the “Mother Machine,” I am selectively recalling here the childless Yerma of the pre-Attis Theatre period, who opens, with her poetics of despair, the director’s way to tragedy; the “absolute” mother Agave, absolute in the sense that she is the agent of both birth and death; and the Beckettian Woman in Rockaby, infant and mother together.

In my discussion of the “Mother-Machine” back in Delphi, I consciously left aside the “modern women” of Attis Theatre, figures like Mademoiselle Julie (2008) and the Woman in Amor (2013). Now, another “modern woman,” Nora, has come to complete this set of three. Like Miss Julie and the Woman in Amor, Nora is a new manifestation of the “Mother-Machine,” who opens up a similar caesura, making a similar incision which distinguishes maternity from natality; birth, that is, from the regenerating human capacity.

The Dead Zone and the Dangerous Doll

This Nora would not feel at home in a typically naturalistic, bourgeois living room. Instead, the diagonal space, designed by Terzopoulos, on which Nora (Sophia Hill), her husband Helmer (Antonis Myriagkos) and her creditor Krogstad (Tasos Dimas) perform, is the caesura, the incision visualized. But this is a dead zone, a no-exit “here,” with its doors opening and closing only to trap.

This is a seductive Nora. But as is often the case in the theatre of Theodoros Terzopoulos, seduction “hides a burnt desire at its core” (Terzopoulos 76, my translation). Thus, here Nora is not just attractive but a Woman of Seduction and Burnt Desire. As an unmotherly “Mother Machine,” she opens a caesura between birth and rebirth and thus causes hard tissue injuries in the flesh of the late-nineteenth-century realistic text. In this way, she stages a postdramatic Theatre of Seduction and Burnt Desire and makes the theatre experience a seductive process.

Theatre as an art of Seduction takes place in the here and now, refuses realistic representation and analytical thinking. It rather prefers to challenge, fascinate and seduce; “to lead,” that is, “the other from his/her truth” (Baudrillard 82). Hence springs its dangerous force for those who are dedicated to decorum, the right and the truth. Such is the theatre of Terzopoulos, such is his Nora.

This Nora is not “an innocent dolly” but a “dangerous doll” (Hill), bringing to mind Jean Baudrillard’s saying that “[t]o seduce is to appear weak. To seduce is to render weak.” She seduces and is seduced, manipulates and is manipulated. She consumes the latest cosmetics, presents and men (her complacent husband and her sarcastic, flirting creditor), and she is similarly consumed by them. She constantly buys and always pays off shopping, holiday and medical loans. Such “vulgar” commodity fetishism takes place on stage and eliminates the difference between living subjects and objects. All three characters are depicted as hoarders who sacrifice genuine desire and feelings to the “gold fetish” (Giouras 230–31, my translation). Similarly, they hide behind verbal fetishism to survive in their own inferno, in the Dead Zone where the narcissistic man is not different from the beast, the commodity, the living dead: “Infernum continuum,” exclaims Krogstad, giving a chuckle of both sarcasm and tragedy.

As maternal abject (Kristeva), a threatening maternal body (according to her husband), Nora will attempt the Big Exit when she realizes the Big Lie.  Where can she go, though? The breakdown of conventional power relationships neither implies easy management of the self nor gives an easy answer to questions of orientation and destination after the Exit. But as long as desire moves (désir mobile), selfhood moves (one’s “I want to have” and “I want to be”) (Pefanis 262).

It is upon this mobility that Nora’s Exit from the Dead Zone is designed. With her Exit, she transforms herself into a Chora in the Platonic, ontological sense of the term as it is borrowed from Julia Kristeva, who gives it an additional semiotic/linguistic/structural meaning: “a Chora, impulsive and sentimental,” which prepares the structure of a new Language and a new Logos. As Chora, Nora is not the unmotherly “Mother Machine” anymore but motherly, an endopsychic womb, a place of birth for the new selfhood, “a sign-place which carries our pre-linguistic process” (Papapostolou 73, my translation). Hence, by and large, the postdramatic character of the performance.

Above all, as Chora, Nora shows theatre to be “an ongoing utopia.” The two, the postdramatic character of the performance and its utopian vision, coincide in so far as theatre offers a promise for the end of power and the emergence of human freedom but no fulfilment, being  “a rehearsal for social reformation” (Pefanis 262, my translation). In that sense, the second caesura, which Nora opens in the final, silent scene, her Big Exit from the Dead Zone, refashions the familiar, “gives an elusive picture of the unspeakable,” stresses the importance of désir mobile not only for gendered relationships but for all human relationships.

And even if Nora’s Big Exit signifies her Disappearance (the suggestion of suicide narrows the staged event), it does not eliminate the fact and value of desire as moving and motivating. Nora’s disappearance is not a gesture of defeat and banishment but a meeting with Mourning and a dive into the Darkness that is part of the process of Metamorphosis, in the moving place of the endopsychic womb, in the Chora Nora.

In the end, the second caesura that this “modern woman” opens, this modern “Mother Machine” of Attis Theatre, denies stitches and miracles (Krogstad’s sarcastic, frenchified exclamation: “Miracle!”). Terzopoulos leaves the cesarean section open for us to look at the Abject with Artaudian archaic awe  (Kristeva 17–8).

Kristeva, Julia. Powers of Horror: An Essay on Abjection. Translated by Leon S. Roudiez, Columbia UP, 1982.

*Penelope Chatzidimitriou (MA in Theatre Studies, Royal Holloway University of London; PhD in Theatre Studies, English Department, Aristotle University of Thessaloniki). Doctoral research in the complete opus of the internationally acclaimed Greek theatre director Theodoros Terzopoulos; collaboration with Attis Theatre (Athens) as a scholar; interest in modern directors, performance and performance art. In 2010, she published (in Greek) her book on the work of Theodoros Terzopoulos. Other publications are included in editions of Bloomsbury Methuen Drama, China Theatre Press, Cambridge Scholars Publishing, Theatre der Zeit, etc. She lives and works in Thessaloniki as a theatre lecturer and critic.

One thought on “Nora. The Big Exit”