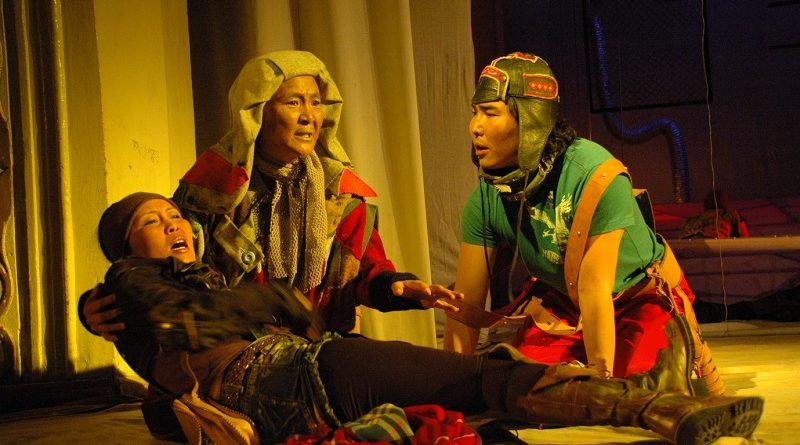 Mongolian theatre has gone through numerous developments in its long evolution from an essentially nomadic civilization to a modern one. Yet, even looking back to its earliest days, one can see proofs of performativity in such things as its ancient hunting dances, its religious rituals (utilizing the Tsam dance form) and even in its worship of nature (seen in the dance form called biye biyelge). Conversational folk songs are another such element. Musical tales filled with wisdom and guidance—some epic, some mythical—they vividly express ancient music and the art of spoken poetry. All these laid the foundations of modern Mongolian theatrical art.

It was in 1830 that the first modern Mongolian theatre company was established. Called Theatre of The Nomad, it was created by Danzanravjaa (1803–56) and included more than a hundred writers, directors, actors, designers, technicians and musicians. One of its first and most popular productions was the epic Moon Cuckoo, performed with stage machinery and designs that needed twenty camels to carry.  Performed each year and lasting over a two month period, it involved some 30 main actors and most everyone else on and off-stage. Later, a shortened version was performed which took only 15 days. Some scholars suggest that there may have even been a one-day version.

Despite its size and popularity, Theatre of the Nomad was actually working in contravention of long established state laws which forbid public imitation as far back as 1691, a ban that lasted until 1911. But, apparently, few took notice outside the cities. Historical records of the late-nineteenth and early-twentieth century reveal that theatrical performances of various sorts did take place in the more remote areas of the country. In some ways, the ban might actually have led to interest in theatre among intellectuals and aristocrats.

The ban effectively ended when Manchuria invaded and then occupied Mongolia in December 1911. After the people’s revolution of 1921, Mongolia was reformed on a Marxist model. In 1922, a troupe of “Shi” players was formed, following a decision by the Central Committee of the Proletariate that emphasized the importance of art and culture in education as well in the promotion of  state policy.

In 1926, the 600-seat Stadium of the People opened for concerts and theatrical performances, signaling the start of Mongolia’s effort to professionalize theatre art. The state also began to offer short-term courses to young aspiring artists in acting, history of theatre, singing, music, stage and physical movement. These courses combined traditional Mongolian singing, storytelling and playing of the so-called horse-head fiddle (which required both memorization and improvisation). Ties were developed with Russia, and the Stanislavski system was used from then on to train Mongolia’s actors. In November 1931, State  Resolution 50 established the Mongolian National Theatre.

Since then, Mongolian theatre has gone through two major periods: first, a clearly socialist theatre, and, later, a more public-oriented theatre. The theatre of the socialist period was obviously influenced by Soviet Russia, which sent teachers to the country not only in theatre but also in opera and ballet. Productions from the 1930s right through the 1980s were produced under very strong ideological censorship. The repertoire included national plays, international classics and translated Soviet plays, many showing the importance of socialist friendship, the accomplishments of Russia, socialism and the construction of the future as per socialist policy.

Given such controls, it was not easy to reflect Mongolian history or Mongolian historical figures at this time, nor was it easy to write about religious or cultural traditions and customs. Plays followed state policy, they were written by Mongolian writers such as D. Namdag (1911–84) and D. Batbayar (1941–2020), and they were played along with traditionally staged classics by Shakespeare, Gogol, Chekhov, Tolstoi, Molière, Brecht and Ibsen.

As Russian influence began to wane in the 1980s, a new generation of Mongolian directors emerged who enriched and enlivened both playwriting and the art of acting. Moving carefully away from earlier restrictions, actors began to work collectively with these directors, rather than just following their instructions. Group work was much valued at this time, including in the development of plays. New trends were also seen in plays for children and young audiences. Evolving traditions emerged, some involving folk forms (Zorig 12).

The collapse of the USSR after 1989 led  to a series of changes all across Mongolia’s national spectrum, including changes to its intellectual and cultural life. Culture and art suddenly had to adapt to a free market economy, and there were significant cuts to subsidies. All this also brought changes in the legal rights of artists, with new laws on culture, cultural policy and the protection of cultural heritage coming into effect. With the new freedoms of expression, equality and pluralism became established by laws, and artists turned again to performances of folk material and national issues with classics reinterpreted in a Mongolian way, a style closer to folk art.

Today, there are three types of companies working in each of Mongolia’s 21 provincial capitals, including the national capital, Ulaan Baatar. There are also a small number of private theatres operating as well as several independent production groups.

These groups stage new Mongolian plays such as Story of the Boy Khukhuldei, Hot Land, Mirage and Social Mind, as well as works from the west. Since the 1990s, even the national theatres have begun producing plays by Tagore, Lorca, Sartre, O’Neill (Desire Under the Elms) and Williams (Streetcar Named Desire).

Connecting these old and new styles brought rich ideas that reinvigorated the aesthetic paradigm of the national dramatic literature and its traditions. It also created opportunities to study theatre from various alternative points of views.  This is clear in the literature printed since about 2000, arguing that Mongolian drama reached a new level of development, richer and more varied in terms of  forms and styles.

A new generation of dramatists has also emerged, led by B. Lkhagvasuren (1945 2019) and S. Jargalsaikhan (1957–2012), who have written plays dealing with personal issues both realistically and symbolically. Those writing in the latter style include D. Uriankhai (b. 1940), B. Batregzedmaa (b. 1972), U. Shiguurge (b. 1968), D. Mendsaikhan (b. 1980) and P. Batkhuyag (b. 1974). Such alternatives to socialist realism continue to influence new forms. Many of these show an interest in dream and the subconscious, and they clearly reflect the inner struggles of their characters without easy conclusions.

Batar’s approach to plays such as Chekhov’s The Seagull, Cervantes’ Don Quixote, Gogol’s Dead Souls, Tolstoy’s History of A Horse and plays by national dramatists, such as Uriankhai, Lkhagvasuren and Batregzedmaa, is clearly director-dominant. His work also brings social issues onto the stage.

Actor-director N. Naranbaatar (b. 1975) is another one of the new group staging both classics and national dramas. His approach is based on profound work with the actor to create new insights into plays, as in Son of Heaven and even Hamlet.

The development of private and independent theatres was clearly linked to the growing number of young actors graduating from theatre schools and wanting to try new methodologies. Often, there were no vacancies in the national companies, so they needed to create their own opportunities. There seems to be a growing audience interest in seeing these new approaches.

Most private theatres are family-run businesses. One such group is the Block Box Theatre, which operates on this principle. Established in 2012, under the leadership of director S. Myagmar (b. 1952), and with only a hundred seats, their repertoire has included international works, such as Ionesco’s The Chairs and Rhinoceros as well asJapanese writer Ryunosuke Akutagawa’s In The Jungle. Myagmar writes:

Our theatre has metal chairs so it is not possible to fall asleep. When you are watching how cold a human heart can be and touch your seat, you immediately feel that coldness. . . . Every cell needs to be alive in this space. It is a black world. Audiences must work to find the light when inside this space. We try to remove everything that can distract a person’s attention.

One 2018 production auguring well for Mongolia’s dramatic future was Goethe’s Faust, directed by M. Batbold (b. 1984). His first professional production after graduation from GITIS in Moscow, where he trained under Russian avant-garde masters Yuri Butusov and Sergei Jenovatich, Batbold’s Faust realizes that finding himself is more important than discovering the world. Such ideas are becoming clear in the work of many dramatists, including the female writer Oe. Ulemjtoegs (b. 1991), whose non-realist play Dead Body is helping to define the country’s modern dramaturgy.

Zorig, B. “Trends in Sync with European Culture.” Masters of the Golden Stage.

*Batsaikhan Dashdondog graduated in 1978 from Saint Petersburg Theatre Academy with a degree in theatre criticism. She defended her DEA in 2005 at the Sorbonne in Paris and received her PhD in 2014 from the Mongolian National University of Art and Culture with a dissertation on “Policy Reform and Aesthetics in the Mongolian Theatre of the Democratic Period.” A full Professor since 2014, she is a member of the Mongolian Writer’s Union, the Mongolian Union of Art Workers, the Artistic Council of SDAT and SOBT, and the Saint Muse Academy. She has published over 100 articles and scholarly papers independently and jointly, and edited 10 books. She is a recipient of the Altan Gadas Medal and the Golden Feather of the Mongolian Writers’ Union.