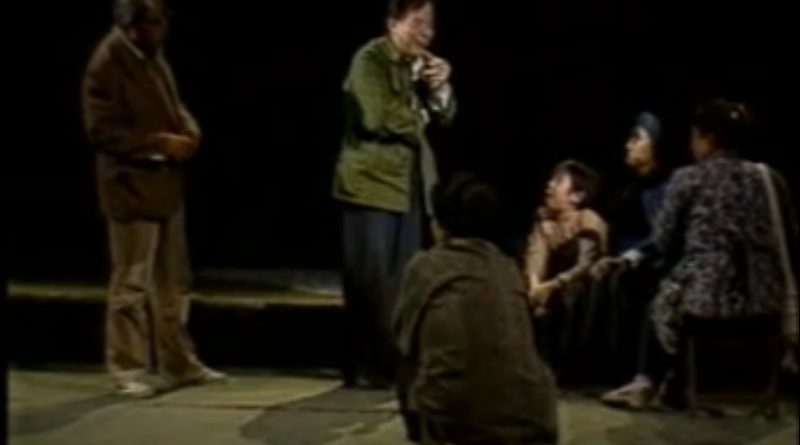 This article offers an examination of polyphonic technique in Gao Xingjian’s Wild Man (1985). The discussion of polyphony in this play has been predominantly focusing on parts delivered by the human voice. In Wild Man, however, polyphony entails many more sonic components than the human voice and manifests in a much more complicated fashion than interactions among human voices. In this article, I present the configuration of the world of sound in Wild Man, analyze sounds other than human voices as an active player in stage action, and argue that Gao’s overall musical image in this play is conveyed through the soundscape that the playwright constructs for us.
Keywords: polyphony, anthropophny, biophony, geophony, soundscape

Gao Xingjian’s Wild Man (1985) is a notorious challenge, “a difficult play to read and perform,” as Gilbert C. F. Fong precisely puts it, because “it is loose not only in structure but also in content and theme” (105).[1]

Gao, the 2000 Nobel Laureate for Literature, composed Wild Man, in his own words, “as an experiment, to see whether there is a bigger capacity—with the limit of several hours and [the limit of] a theatre—for a modern epic which fuses human and nature, modern people, and human beings’ history” (“Jinghua yetan” 172). To Gao, all he did was “merely to narrate, just like telling the history of mankind. . . . The entire play is narrating mankind’s history, an individual’s fate, marriage, and love, the development and destruction of nature, drought, flood, wild men, and so on, [and it includes] all such as tragedy, comedy, and farce” (171–72).

This rich play has nurtured analyses from a variety of perspectives. Its reception history has been contextualized in the controversial influence theories in comparative literature studies (Chen). Discussions focusing on dramaturgical and literary analyses shed light on the play’s themes and the notion of freedom (Fong), the translation of the paradigm of modernism into this play (Yeung 51–75), and Gao’s experiments in Wild Man as an explorative/socially-committed play (Zhao 80–85). Studies with close attention to Gao’s aesthetic pursuits examined his suppositional strategies based on first-hand directing experience (Evans), Wild Man as a strongest example of Gao’s search for the total theatre (Łabędzka 179–206), and the playwright’s alternative aesthetics both in the context of his own creative chronology and in the context of 1980s China (Quah 69–89).

Despite differences in perspective, all these analyses address a central technique: polyphony. Indeed, Gao identifies Wild Man as a strong example of polyphonic technique (Gao and Fang 65, 94) and identifies the application of polyphonic technique in playwriting as something “close to the composition of a symphony” (“Jinghua yetan” 189). Much has been discussed about polyphony not only as a structure but also as an effect, and not only as a form but also as a motif, although the discussion has been predominantly focusing on parts delivered by the human voice.[2]

In Wild Man, I argue, polyphony entails many more sonic components than the human voice and manifests in a much more complicated fashion than interactions among human voices. The Playwright’s Notes indicate the following:

This play has several interwoven themes to form a polyphony, in which they sometimes overlap harmoniously or inharmoniously with certain contrast. Not only the language has multiple vocal parts, but the language and music and sounds also form a polyphonic structure, even contributing to a contrast to the visual. Just as the overall musical image that is pursued by the harmony, an overall effect is the pursuit of this play. (273)

It is not specified, nor has it been often asked, what this musical image entails and how it sounds. In this essay, I present the configuration of the world of sound in Wild Man, I analyze sounds other than human voices as an active player in stage action, and I argue that Gao’s overall musical image in Wild Man is conveyed through the soundscape that the playwright constructs for us.

The Ecologist in Wild Man, according to Gao, “is one narrative perspective that runs through the entire play” (“Jinghua yetan” 171). Ecologist goes to a mountainous area for tests and samples of a forest. Unfolded along this action line are a series of  plot lines: Ecologist’s wife is not happy with their marriage and they agree to divorce; local wild men attract domestic and international investigations and media attention; an old singer travels around the area, performing exorcist rituals and delivering ancient epics; parents follow the old custom of marriage arrangement for their children despite the younger generation’s own opinions; and the forest is endangered by rapidly increasing felling, both legal and illegal.[[3]]

As these plot lines intersect, episodes, folk songs, dances and ancient rituals are shuffled into a narrative that is anything but chronological or logical. As Gilbert C. F. Fong vividly describes,

Perhaps the play, contrary to what most critics think, aims not merely to promote environmentalism and protection of the ecology, nor is it a lament on the depressing fate of the Wild Man. Whatever is wanting in thematic profundity is more than compensated by the overwhelming physicality on the stage, the songs and dances, the shamanistic rituals, the noises of the city and of tree felling, the chaos during the flood, etc. (110)

Fong points to a critical component in Gao’s composition: sound. Into Wild Man, Gao weaves a world of sound: those produced by humans, those vocalized by animals, and those produced by natural forces. In Table 1, I present this world of sound, following the play’s sequencing of episodes, each of which focuses on a new action. I adopt Bernie Krause’s categorizations of sound into anthropophony, biophony and geophony, emphasizing on the different sources of sound.

In addition, I further sub-categorize anthropophony into human voices and man-made sounds that are not vocalized; this helps distinguish the performer’s vocal production—mainly song and speech—from non-vocal sounds, such as playing of musical instruments, machinery and city noises. This table delineates several features of Wild Man’s world of sound: anthropophony, biophony and geophony are all present in this world; the sounds of the three sources interact in a fairly flexible fashion—fading in and out, in solo, in duet and overlapping; and, with exceptions, human voices are often layered with other man-made, biophonic, or geophonic sounds.

One significant yet underexplored feature of the polyphony in Wild Man is that non-human-vocal sounds actively contribute to the onstage action. To Gao, action is the key to theatricality. While advocating an openness to different interpretations of theatricality, Gao clearly defines that theatricality lies in action (“Xijuxing” 18–19), which to him includes “movement,” “process,” “change,” “contrast,” “discovery” and “surprise” (“The Potential of Theatre” 44). As human characters perform actions onstage, Gao’s world of sound illustrates, parallels, complements, criticizes, pushes, and hinders these actions.

In Wild Man, the simultaneous presence of two vocal tracks (each of which may involve more than one human voice) appears five times, and each of these episodes involves active production of non-human-vocal sounds. The sounds of the gong and the drum proceed with the song of Old Singer and Old Singer’s Assistant as Performers narrate the human invasion of nature (Episode 1.1 in Table 1). The sounds of vehicles and people struggling through water accentuate the catastrophe reaching the point of no return as city residents and functionaries lament their desperation during a flood (Episode 1.4). The sound of bubbling mountain stream introduces Old Singer chanting an epic on the beginning of the world in juxtaposition with Ecologist’s narrative of mankind’s dominance of nature (Episode 2.12). The gradual increase of the sounds of a chain saw, tractor, and diesel engine, with the remote, husky voice of Old Singer, set the backdrop for Actors listing animals destroyed by mankind while a separate actress recites the fate of a tribe (Episode 2.14). And the sounds of a group of hunting dogs barking excitedly culminate a getting-ready-for-hunting scene when international scientists on television debate the issue of wild men as the Wild Men Investigations Team checks equipment and goes through protocols (Episode 3.8).

Together with human voices, sounds of other human actions, from animals, and from natural forces construct a soundscape through which Gao conveys the musical image of the world in his modern epic. The best example is Yaomeizi’s wedding parade (Episode 3.6). The festive episode begins with music and song by the Team of Brothers, followed by Matchmaker’s song and then the entrance of Team of Sisters, who are grouped around Yaomeizi, the bride. The mood is “festive” (“Yeren” 262), and the visual image is filled with bright colors. Inserted in the middle of the Team of Sisters’ song, Gao’s stage directions are as follows:

By this episode of the play/production, it has already been clear to the reader/audience that Yaomeizi’s marriage has been arranged by her mother (Episode 2.10), and she has tried to escape this fate but failed (Episode 2.11). Here, the stage presents at least three layers of juxtaposition: the visual contrast between Lumberjacks’ in leaping dance and a group of women delivering a folk wedding song; the audio contrast between the sound of bubbling brook—which accompanies Yaomeizi’s all previous interactions with Ecologist, the man who she wants to marry (Episodes 2.4 and 2.11)—and the sound of chopping trees and a tree’s falling and crash; and the three-dimensional contrast between the action of ending the life of trees and the action of a young bride opening a new chapter of her life. Perhaps the most powerful element in this soundscape is the contrast between the multi-layered sound surrounding Yaomeizi and the total silence on her part. The playwright does not give her one line or action, even in the stage directions.

This essay has shown the challenge of describing and analyzing sound as an active player in onstage action. Again and again, we rely on written language to visualize the sources of sound and the timing of their entrance and exit in Table 1, and we turn to the playwright’s textual stage directions to trace the soundscape in his mind. In the meantime, although all these efforts help identify and conceptualize sonic components in the play, we sometimes fall into the paradox of deafening ourselves to all other sounds by focusing on one particular source of sound, and we still lack the understanding of the sensual experience of the timbre, the pitch and the intensity of the anthropophny, the biophony and the geophony—or how it is when they work together—in this play. As John Mowitt notes, as we align vision with reason, it undercuts, “even denigrating, the epistemological authority of sound” (79). In this sense, soundscape may be the key to the overall musical image in Wild Man. A difficult play to read and perform, its soundscape arouses and challenges us to imagine, to be immersed and to surrender.

[1]Gao slightly revised the play for its 2001 publication. This essay is based on the 1985 version.

[2]Gilbert C. F. Fong discusses the “audio-visual ‘polyphone’ that assaults the senses from all directions” (110) in Wild Man, but he does not further elaborate on the approach.

[3]In interviews with Fang Zixun (Gilbert C. F. Fong) during 2004–06, Gao further analyzes that, for Wild Man, “the playwriting adopts two threads throughout the play. One is Ecologist’s research in the forest and his thoughts, and the other is journalists, academics, and investigators tracing the wild man” (Gao and Fang 94–95).

Łabędzka, Izabella. Gao Xingjian’s Idea of Theatre: From the Word to the Image. Brill, 2008.