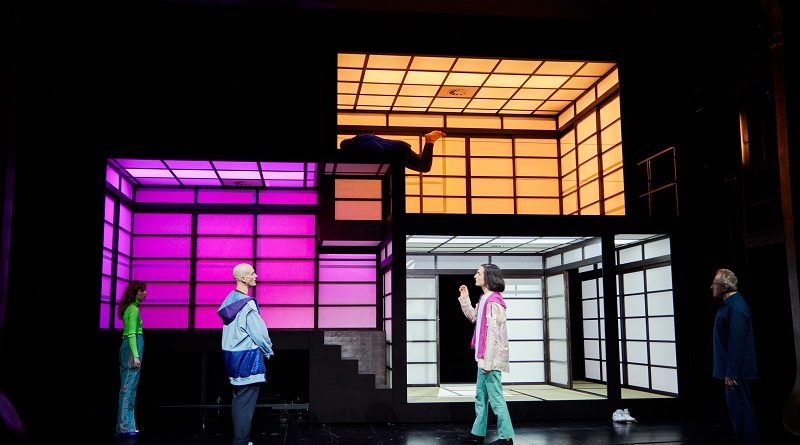 57th edition of Theatertreffen, showcasing the best of German-speaking theatre, online May 1–9, 2020, from Berlin, Germany.

I have seen the future of theatre. It was streamed to me from Berlin. The corona virus made Theatertreffen go online at short notice. Six productions from the selected ten best German-speaking shows were streamed to a public of 120,000.

As the critics’ jury said in its wrap-up discussion, they select “the most impressive” performances. The shows need not have more than that in common, and neither will I try to force an umbrella interpretation on them. There was, however, a special requirement for 2020: at least half of the shows had to be directed by women. This meant that some well-established names were left out.

Dutch director Johan Simons is a veteran invitee at Theatertreffen. Currently the artistic director of Schauspielhaus Bochum, his Hamlet features the actress Sandra Hüller in the title role as the Prince of Denmark.

The Bochum Hamlet was shown in a television version made by the German broadcaster 3sat, directed for television by Catharina Kleber. Theatre makers habitually look down on streams because there the camera gets to decide where one looks. The same people have no qualms about superimposing close-ups of their actors on an on-stage screen, which is something of a contradiction. In this version the camera picked up entrances, exits and the composer/musician Mieko Suzuki at the moments of soundscape change just as the eye would have.

Jeroen Versteele’s dramaturgy combines Shakespeare with bits from Heiner Müller’s Hamletmachine. It leaves out Horatio and gives most of his lines to Ophelia (Gina Haller), who gains a stronger presence. She and her prince share an ethical obligation toward themselves, which also destroys them from within, when they perceive others failing to meet their standard. Hüller’s Hamlet is not only a reflective introvert. He is also possessed by his father’s ghost, whose lines he self-hypnotically bellows to himself.

Then there are the gravediggers! They double as actors and ambassadors. Jing Xiang is a delightful busybody, whereas Ann Göbel is more of an oracle, dropping her clairvoyant line “he is alone” to hair-raising effect at every life-changing occasion. Claudius (Stefan Hunstein) crouches in prayer at the feet of this gravedigger.

Both Hamlet and Laertes (Dominik Dos-Reis) are reluctant to start their fatal duel. In turn they say, then yell “you begin,” till Laertes is left alone shouting and jumping while Hamlet stands still. The production makes no further fuss about Hamlet’s resignation to his fate; subdued self-awareness triumphs.

Chinchilla Arsehole eyeye (Chinchilla Arschloch waswas), by Rimini Protokoll with numerous co-producing theatre houses, is both entertaining and hilarious. Its performers are people with Tourette syndrome. The show is devised, written and directed by Helgard Haug.

The world is filled with plays about their own making, but with Chinchilla this reaches a new dimension: stages, lights and auditoria had to be remodelled to suit the performance. Tic-triggers had to be removed. We still get to hear plenty of meows, whistles and obscenities, enough to reward my curiosity, for example in a contest for the best tic between Christian Hempel and Benjamin Jürgens. It soon ends in a lukewarm tie; they regretfully inform us that tics fail to flourish on demand. The self-irony is endearing. Hempel, Jürgens and Bijan Kaffenberger (an MP at state level) put it succinctly: out there they are a disturbance, in here an attraction.

More serious moments tell us about complaining neighbours, who may understand the existence of the syndrome but run out of empathy for those who suffer from it. In the discussion afterwards, the show was described in much the same terms as impro theatre: it has a framework, but the lack of predictability makes for a captivating performance.

Kammerspiele from Munich had two productions in the selection. The program for Humiliations to Humankind (Die Kränkungen der Menschheit) suggests plenty of reading material for a better appreciation of this conceptual piece. Anta Helena Recke’s creation first portrays monkeys (actors) in an exhibition, then follows an orderly group of white visitors to the same, and it ends with people of colour in festive costumes of their respective cultures bringing in Gabriel Cornelius von Max’s 1889 painting Apes as Judges of Art. I was left very aware of my whiteness, which distances and intellectualizes my viewing experience.

Toshiki Okada from Japan is a regular guest director at Kammerspiele. His The Vacuum Cleaner features a dysfunctional family, whose children are hikikomori, meaning they never leave the house. The characters seem not to seek mutual contact, as they launch into long musings about quality coffee or ways to get killed by father. As if this were not twisted enough, the actors perform elaborate movements while speaking. In the after-show discussion, Mr Okada said that—as a young viewer before theatre developed into a career for him—he became bored with text and body conveying an identical message. The result is a highly original directing style, a nearly nonsensical carousel; to climb on for a ride, I can only hope that there is a stop where I happen to be standing.

Katie Mitchell first directed Alice Birch’s Anatomy of a Suicide in London in 2017. Now, she has staged a German translation (by Corinna Brocher) for Hamburg’s Deutsches SchauSpielHaus. The set, again by Alex Eales, consists of three doors upstage. Above each door there are dates: Clara (Julia Wieninger) lives in the 1980s, her daughter Anna (Gala Othero Winter) in the 2000s and her daughter Bonnie (Sandra Gerling) in the 2030s.

The actresses, each standing in front of her door/epoch, are dressed by co-actors and stagehands for each new scene. Women’s roles are literally given or forced on them from above. The after-show discussion made much of the complicated choreography needed to bring the period costumes and props in and out at these moments. The painstaking attention to detail in costumes I found more exciting than the inevitably tragic storyline of hereditary suicides.

Claudia Bauer directed a shrieking interpretation of Tennessee Williams’ Sweet Bird of Youth for Schauspiel Leipzig. It is full throttle from the start. In Vanessa Rust’s costumes everyone looks like a cartoon character. According to the director, however, during rehearsals the ensemble spoke not of caricatures but of monstrous characters. I would argue they are not on the brink of failure but hardened to it long ago.

Amidst all the noise, Anita Vulesica as Princess Kosmonopolis takes only a few yet well-chosen moments for spiritual close-ups, when the Princess allows self-awareness to supersede posturing.

Sweet Bird of Youth is a story about its own making, too, with the actors talking into a camera and spotlights as the most trusted partners for dialogue with the overhanging speech bubbles.

I find I can deliver an umbrella statement after all: a firm directorial grip appears less interesting than the fine-tuning of a classic or minimal interference in a strong autobiographical presence. At first glance, this statement goes against reason; a well-oiled production machine should turn out quality shows. But it takes an even better-oiled machine to produce spontaneous-looking masterpieces.

I wonder how long we will remember what live theatre was like. When that memory begins to fade, a theatrical acting style seen in streams will appear outlandish. The newness of the medium strips theatre of its tradition and its aesthetic authority, which film and television will now assume. Theatre will be recognized as a relic like the opera, only without the artistic legitimacy music gives to opera. How long will we continue to film streams to look as if they were captured from a live performance, hoping to help the art form survive till its eventual resurrection?

*Matti Linnavuori wrote theatre criticism between 1978 and 2013 for various newspapers and weeklies in his native Finland. In 1985, he worked for the BBC World Service in London. Since 1998, he has presented papers at numerous IATC events. In the 2000s, he wrote for Teatra Vestnesis in Latvia. Since 1992, he has written and directed several radio plays for YLE the Finnish Broadcasting Company. His latest stage play Ta mig till er ledare (Take Me to Your Leader) premiered at Lilla Teatern in Helsinki in 2016.