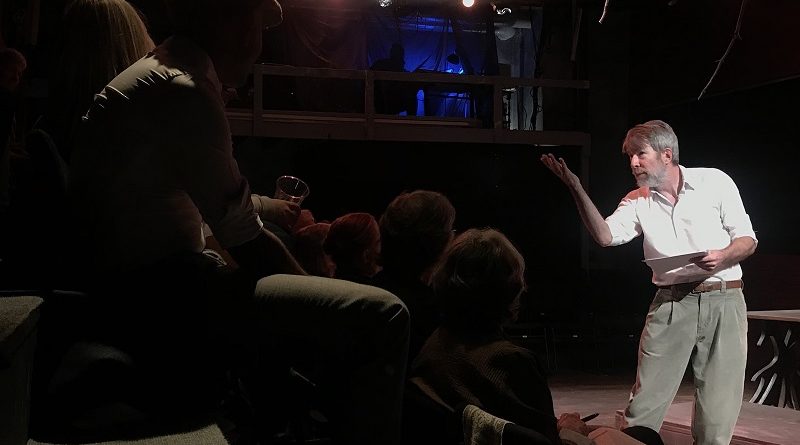 This astonishing, five-hour production was partially a mash-up of elements classic and modern, heightened and pop, philosophical and lustful. As pointed out in the program notes—a courtesy rarely extended in programs anymore—Dostoevsky himself “packed metaphysics into the pulp fiction format, using the schemes of the tabloid novel. . . .” To create the daring script, director Bogomolov hacked away at the original full-length novel (1880) and lifted out the storyline of the father and his three acknowledged sons. He explained: “In Dostoevsky’s novel I am mainly interested in the whodunit rather than in the philosophic and religious quest. This is also the conversation about the reality of nowadays.” As a result, Bogomolov retained some of the discourse viewers expect from Dostoevsky—on ethics, free will, faith, and more—but he also turned some of the great novel on its head: the religious seeker’s suicide, gay sex, a tanning bed for the patriarch’s coffin, a cemetery of toilets for gravestones.

Out of this conglomeration rises a razor-sharp thriller about a revenge murder and the search for the killer. Even the new title, which has dropped “brothers” from The Brothers Karamazov, suggests a mafia-like family. In this streamlined version, the hated head of the Karamazov family is brutally murdered, suspicion falls on one of his sons, who is arrested, beaten within an inch of his life, “confesses” and goes to prison innocent while others around him, who know better, look on. Eventually, with the one brother already carrying the guilt, another brother is also accused, but the accuser reveals he is a fourth brother! He was the issue of the elder Karamazov’s rape of the village idiot, his mother—it is for her sake that he killed the paterfamilias. After a little blackmail, he will go unpunished. A terrific potboiler!

The set is an enormous black box—a Russian space, we read, too dark to see God in. Arrangements of black furniture organize the wide-open space into playing areas suggesting different rooms: a corporate desk, a chesterfield sofa, a black leather set, a long conference table with imposing chair at the head, a large armchair with a rhinoceros head on the back of it (a reference to Ionesco?). Add to these a functional bar-kitchen island center stage, accents in gleaming silver and black tile, and spoofing music from Russian pop and ballads to Freddie Mercury undercutting the action. The overall effect was an unsettling mix of posh moderne and old-boy network, decadent and dull; a swanky lounge, a man cave, a crypt and, I am advised, to a Chinese audience member, perhaps a KTV/karaoke room.

Sometimes two cameramen moved around the stage, as if filming a soap opera, documentary or reality show. What they filmed was projected in real time onto large LCD monitors labeled “Left Eye” and “Right Eye.” This meant we could view a scene either live on stage or from different angles on the screens. As a result, we could linger up close on the actors’ stellar performances, the beauty of the language spilling over us. It also meant that what was happening could be understood in more than one way, that there was no single narrative. The filming created a feeling of paranoia, of privacy boundaries breached.

The show I saw played in November 2019 at the Wuzhen International Theatre Festival in China. According to the production’s original press, the show premiered in Moscow in 2013 amid scandals, protests, resignations, reports of censorship and creative differences. Beyond titillating whispers, none of these have persisted. Awards have been duly won, recognitions proffered, reputations confirmed, houses sold out, ovations showered, foreign invitations extended. Indeed, The Karamazovs dignified the theatre and elevated the rapt audience.

Walt Whitman (b. 1819) gave America a poetry all its own. Not the refined English poetry of the Old World; not even the imitative poetry of America’s “New” England. Leading up to and following the national trauma of the American Civil War (1861–65), the country needed a different sound, an innovative poetic form to galvanize the people’s energies and to manifest a fresh moment. Whitman jettisoned the prevalent rhyme and metric schemes, replacing them with organic cadences and pulses, rangy and unruly line lengths. Gone were the finely wrought images of the poetry of old and its derivatives (“Come, Muse, migrate from Greece and Ionia . . .”); in their place, Whitman’s overflowing catalogue of everything: mystical, sensual; visionary, sexual. Putting distance between New England’s puritanical Transcendentalists and himself, his poetry was transcendent and base. From “Song of Myself”: “Copulation is no more rank to me than death is. / I believe in the flesh and the appetites, / Seeing, hearing, feeling, are miracles, and each part and tag of me is a miracle.” His language pushed against restrictions—elemental, inclusive, dynamic—meaning to create a free poetry for a free citizenry.

A Plurality of One is the brainchild of the nothing-if-not-multitalented Joe Christiano. After some years of his award-winning dramatic reading series, and a solo show featuring three decades of his songwriting, writer Christiano has launched his National Delivery monodrama series to illuminate “the American character in all its richness and diversity, glory and ruin.” Choosing Whitman for his inaugural offering is inspired at a time when America is fighting a painful civil war of values and in need of Whitman’s fervent message: “. . . I give the sign of democracy, / By God! I will accept nothing which all cannot have their counterpart of on the same terms.”

From the outset, we were in for something special. Audience members were offered wine as they entered the lovely theatre, with natural wood everywhere you looked—airy and spacious with exposed beams on very high ceilings; a low, shallow platform upstage; simple seating on three sides. A large piece of driftwood hung overhead, and on a library table, a skull and antlers, a few books, a coffee mug. A distinctly analog, handmade feel. In lieu of a printed program, the playwright himself spoke the credits and Director’s Notes. In the spirit of the show’s conceit, he led us in conjuring the ghost of Whitman (usually residing in the New York Public Library!), now making the trip here for a talk on “Song of Myself,” the best-known poem of Whitman’s most important collection, Leaves of Grass. “O Captain! my Captain!”—we called out the famous lines and, the audience having brought the show into being, there was Whitman, in the jaunty hat and jacket we know from his photos.

Our Whitman, Stanley Spenger, brought his long acting experience to the role, making difficult things look easy. Spenger, who has founded and directed several of the most loved independent theatres in the San Francisco Bay Area, is known for his performances in works both original and from the dramatic canon. Here, he brought an original work to life with the moxie of a classical actor. He captured the full range of Whitman’s poetic voice: now genial or self-deprecating—essential for not turning ponderous; now oratorical—so important to a time when oratory was a way widely to deliver ideas; now incantatory—an influence exactly 100 years later on Allen Ginsberg’s Howl. Whitman himself attended the theatre every week, and he was a passionate aficionado of opera. “I could never have written Leaves of Grass without the opera,” he wrote.

The script opened with Whitman on his life and poetics, and it closed with stories of people whose lives were salvaged by recitations from Whitman. The heart of the show was between those, when Spenger fed the words of “Song of Myself” to the audience, a few words at a time, gently coaxing an individual, or a few people, or a section of the audience, to speak Whitman’s powerful words themselves. The actor’s offering the phrases, and the audience’s repeating them, took on a church-like, call-and-response rhythm, the object of worship being poetry, language, ideas. Whitman’s celebrated “And what I assume you shall assume” was Jefferson’s “We hold these truths to be self-evident” remade for the new era. Echoes Biblical or iambic flew by. It was moving to hear the audience’s voices singly and then in spoken chorus—the pitch-perfect expression of Whitman’s underlying hope: that, through poetry, he could forge from separate individuals a unified, American people.