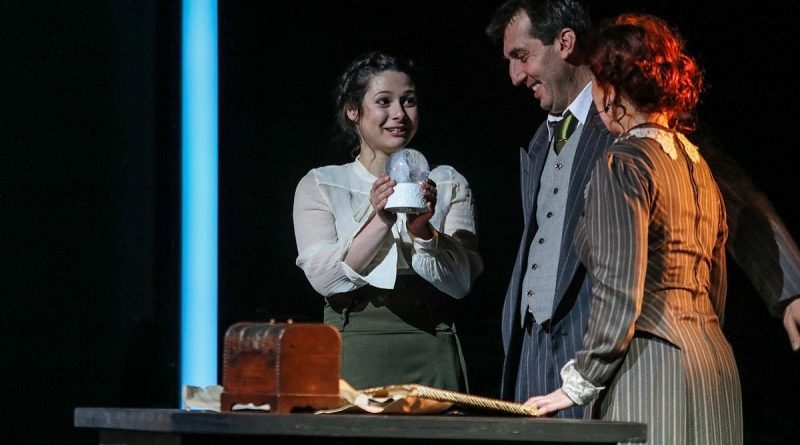 I am writing this review in the strange spring of 2020, when “the Time is out of joint” and the theatre does not know which way it is heading: towards distancing (in actual fact, not à la Brecht), towards super-technology or towards another kind of death? I am writing about a performance seen at the end of 2019, a strangely constructed production, at a small Hungarian-language theatre in Romania, in a small town, staged by a young director, based upon an American text of the 1930s. A show with 40 people on stage—actors, but also members of the community, from schoolchildren to pensioners, including the local choir. A show for the community. A show for whatever space or time. A show of one hundred percent emotion. I saw it again recently, in its cold online version, but the feeling was similar: one hundred percent emotion.

A first emotion-generating element is the text—apparently a strange one, in view of the year in which it was written (1938). More famous, perhaps, for his comedy The Matchmaker, which later became the acclaimed musical Hello, Dolly!, Thornton Wilder was awarded no less than three Pulitzer prizes during his career, including one for Our Town. The play illustrates—with equal humour and gentleness—more than two decades in the history of an imaginary American locality, Grover’s Corners. The dullness of its not-at-all dull daily life is depicted in a relaxed manner, with the stories of a few simple, honest people grouped in three acts: Daily life, Love and marriage and then I reckon you can guess what that’s about.

“No curtain. No scenery. The audience, arriving, sees an empty stage in half-light.” These didascalia do not seem so unusual now. A young man is singing at an old piano; he is joined by other players, with violin, banjo, double bass, guitar, drums. They tune up. A few actors arrive, a few children too; they are preparing for the show. Here comes the Stage Manager, hat on and pipe in mouth. When the auditorium is in complete darkness, he speaks: “This play is called Our Town. It was written by Thornton Wilder, produced by Tomcsa Sándor Theatre in Odorheiu Secuiesc, directed by Vladimir Anton.”

The young Romanian director (b. 1983, Bucharest) decided on a classical staging of the text, which, paradoxically, becomes extremely topical due to the cues exchanged in an almost century-old hit. The show has an almost cinematographic character, in which the situations on the stage and the relations between the characters arise from simple, realistic details; they function on the principle of the parallel cut. But the significance and the poetic beauty of these details is created by the intelligent and thorough orchestration of the whole assembly.

A stage without any scenery is transformed to become a whole town. A long platform, framed by lights, starts from the proscenium and passes through the hall. A large street crosses the empty space. It is Main Street, the street of everyone’s childhood. The actors have become the parents, the grandparents, the neighbours whom we remember so well. The calm town doctor, the restless journalist, the housewives, the children of different ages, the emotional schoolmistress, the priest, the policeman, the bartender, they are all present. There is a natural stage-auditorium flow, the energy exchange is permanent.

Just like the original play, this Our Town is a theatre-within-theatre kind of show, where the scenes are integrated in the overall story by the Stage Manager, acting as narrator and commentator, but also as a sociologist or guide. Árpád Barabás is an actor who would be in demand at any theatre: good looking, good voice, charm, naturalness, professionalism. He is assigned the mission of “breaking the fourth wall” of the stage in the relationship with the audience and leading, like a human God, the rites of passage of the town’s residents: birth, marriage, death, all of them linked by love.

The solutions for the set design are as efficient as they are simple and inspired.  Alternating between horizontal and vertical planes, a few large neon tubes become, successively, the outline of the houses of the two young lovers, the cross that will protect their marriage and the stones that will mark their tombs. In the background: the town lights, at different moments of the day, the year, the ages, life.

“Do any human beings ever realize life while they live it—every, every minute?” It is a rhetorical question, and the reply is of an incredible, almost perplexing simplicity. Pronounced on the stage, though, it embraces the entire profoundness of life and death, theatre and love, the joy of living and of the sadness that follows, the live laughter and the tears in the skies. The young Emily character is given a chance that is never available to mortals: to return to Earth for a day. She chooses a happy one from her past: her twelfth birthday. She will then meet her mother and her father, maybe even her future husband and, certainly, the people of the town. She won’t only live it: she will watch herself living it. Just like in the theatre . . .

“You’ve got to love life to have life, and you’ve got to have life to love life . . .” It is a paradox that is as simple as it is true. It disregards Time and Space. A paradox that had been taken on by the creators of the show Our Town long before “the Time was out of joint.” Music was put to good use, too, without deviating into melodrama. The excellently constructed soundtrack puts together original compositions with processed live versions of hits dating from different times, from Lonesome Town, interpreted by Ricky Nelson in 1958, to a lovely rendition of Rihanna’s Umbrella in 2007. When the show is over, you are left with the obsessive memory of this line from the movie A Star Is Born (2018): “Maybe it’s time to let the old ways die. . . .”

The title A Star is Born no longer applies either to the director Vladimir Anton or to the Tomcsa Sándor Theatre of Odorheiu Secuiesc, who, although young, have already been artistically confirmed. Their production of Our Town[1] may claim the title because it speaks to feelings and not to reason at any cost. It is a show that may create an addiction in those who are still seeking emotion in the theatre. It seems hard to believe that feelings can still impress when, on the stage, everything was said that was there to be heard and everything was shown that could be seen. And I wonder now where Theatre will be heading in this third millennium, after this world crisis . . . I wonder . . .

[1]Our Town was nominated for Best Performance at The Romanian Association of Theatre Professionals UNITER Gala Awards, which is to take place in 2020. Also, the actor Tamás Jakab was nominated in the category Best Debut, for his performance of George Gibbs.

*Maria Zărnescu, PhD (b. 1969, Bucharest) is a Romanian theatre theorist and critic, as well as Associate Professor and Head of Theatre Studies Department at the National University of Theatrical Arts and Cinematography “I.L. Caragiale” Bucharest. She is the author of two books, Music and Muses (2015) and The Sound of Theatre Music (2016), and has published theatrical and musical reviews, studies and essays in Romanian and international journals. She received the Romanian Association of Theatre Professionals UNITER Award for Best Theatre Criticin 2015.