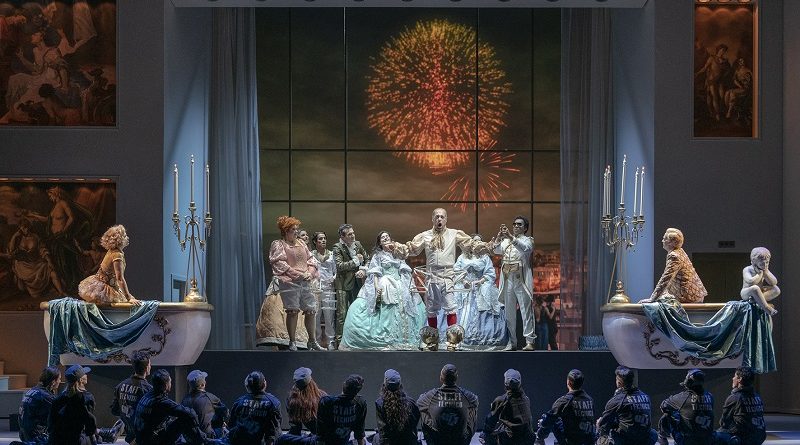 To meet again the tragic Ariadne, abandoned on Naxos, is an unusual event, especially if it takes place on the edge of the world in the company of the celebrated characters of commedia dell’ arte. This reunion was held on a stage considered worthy of its mythical lineage, the Colón Theatre in Buenos Aires, during its 2019 season. An exceptional opera that speaks for itself, successfully confronting genres and world views with sparkling wit.

A wide variety of Ariadnes have come into artistic existence over the centuries. Each new version—bringing with it a trail of readings in the cultural footprints left by its predecessors—puts into play the variants of its own era (its own territoriality, poetry, culture and political and social perspective). The version by Richard Strauss and Hugo von Hofmannsthal materialized in Ariadne auf Naxos (1916),[1] the opera in one act and a prologue which was considered innovative for the time and is, as several specialists have stated, the most sophisticated comic opera ever written.

The following remarks aim at connecting the reader with Marcelo Lombadero’s staging of Ariadne auf Naxos, recently premiered at Colón Theatre, with musical direction by MaestroAlejo Pérez and with the participation of an outstanding group of singers. The idea is that the reader should discover how Lombardero shaped this new Ariadne in Buenos Aires, through his own opinion and the variations he introduced in relation to Strauss’s opera.

Lombardero, who has had a highly acclaimed artistic career,[2] sees himself as a “very traditional” director who faces the challenges of rethinking Ariadne auf Naxos from that perspective. From thorough work on the sources, he seeks to provide his own point of view as a starting point from which to retell the story. For this director, Ariadne auf Naxos is a tribute to opera. A tribute he emphasizes through humour to highlight the contradictions of the medium. His modus operandi consists in exposing the chosen work to playfully foster the search for “our own stereotypes, to have fun with them and with the audience as well.”

The homage to opera paid by Strauss’s Ariadne is clearly shown; the director explains, “In both of its parts, in the experimental prologue that looks for a new form of recitative and in the second part, something more colloquial and naturalist. This is an opera about opera. It gives us theatre people an opportunity to laugh at ourselves.” The audience also takes plenty of pleasure in this.

However, many decisions had to be made so that this “chamber format” opera could fully pay tribute to this genre in a theatre such as Colón. According to the musical director of the opera, Alejo Pérez, the pit had to be elevated so that it could almost reach the stage level, and the string section was minimized. In addition to this, the stage design by Diego Siliano was really effective, since it worked as a kind of “acoustic shape.”

Updating the role of the composer, who appears in the prologue, was a further decision made by Lombardero. In Strauss’s Ariadne, set in the eighteenth century, the character was performed by a woman; the travesti role of the composer was suggested by the librettist at that time; the voice had to be young (it had to refer to Mozart as well). In the Buenos Aires production, the role is played by a woman too, but she is not dressed like a man. It was decided to leave her as “what she is: a woman.” Her costume is quite ambiguous, however, since it is impossible to think of this character as “wearing men’s clothes” nowadays—because “we live in a unisex era,” concludes the director. (And besides, the character would not be in line with the hyper-realistic features of the play.)

Lombardero has set Ariadne in a contemporary world, indicating that it may occur either here in Buenos Aires or in Punta del Este,[3] in the mansion owned by a man who has hired two groups: one of them presenting a neo-baroque show, the other appearing as a “cheap” musical comedy group. The director explains that despite keeping the same elements, he has tried to bring them up to our present time, highlighting the conflicts and contradictions between both worlds.

The comedy group, identified in Strauss’s work with the iconic commedia dell’ arte characters, is shown under the kitsch-pop influence in Lombardero’s mise en scène (the group’s diva, Zerbinetta, appears on stage wearing clothes whose style clearly refers to a well-known international pop singer). Meanwhile, in the serious opera prepared by the other group, baroque features have been accentuated. Its young composer, present on stage, defines his play Ariadne auf Naxos as “an allegory of human loneliness.” In opposition to that view, the fickle Zerbinetta appears as Ariadne’s “earthly opposite,” an Ariadne that has been abandoned by Theseus on the island of Naxos and inconsolably wishes to be dead. Instead, Bacchus—by nature the god of the second chance, of the second life—arrives to change her with redeeming love.

In the mansion, the groups are getting ready. Both plays will have to finish before the firework display starts, since this has been planned as the climax of the celebration for which these two groups have been hired. (As Lombardero remarks, “the fireworks are the highlight of the evening: ignorant patrons have always existed”). The orders are given by the Butler—the master’s blunt porte-parole—who comes back to announce that, as dinner has been delayed, both plays, with their completely different styles, will have to be performed at the same time. How to do it will be their problem.

All the controversies among the performers—which the butler has intensified as a result of his last-minute changes, to the despair of the composer—as well as the typical pre-show tensions, occur in the prologue. In the single act that follows the prologue, the audience witnesses the opera Ariadne auf Naxos, whose preparation and vicissitudes they have already witnessed.

But, as the butler indicated, everything must finish before the start of the fireworks; so, in the final scene, although the show has not yet finished, the technicians start dismantling the set and the singers begin to return part of their costumes, while Ariadne and Bacchus, in absolute lyric effusiveness—and in the middle of all the dismantling—star in a metamorphosis drawn from their love encounter.

The butler, who started with all the preparation for the play in the prologue, reappears at the end (carrying the envelopes with the artists’ fees); a sort of brief, sui generis, epilogue. Outside, in the garden—screened as a rear projection—the guests can be seen admiring the fireworks through a large window.

On the one hand, the dismantling of the set exposes the artifice, demystifying the scene; on the other hand, the intensity of the singing and the music enhances the mythical dimension of the play, ensuring the permanence of art (even in the middle of the fireworks’ din, which explodes on all the stages of this wide world). Once more, it is through its half-dressed performers that Ariadne and Bacchus’s myth appeals to the audience and delights them, thanks to their powerful theatre intensity.

Ariadne’s return to Colón Theatre, after an absence of 26 years, has also fostered a reunion with Richard Strauss’s opera librettist, the playwright and poet Hugo von Hofmannsthal, an innovator in the field of dramatic writing and one of the first representatives of modern non-illusionist theatre. Ariadne’s libretto is the most accomplished example of this conception.

Note: The opinions of Marcelo Lombardero expressed in the text come from the conversation that the author of the article held with him in Buenos Aires, in August 2019.

[1]This opera had a first version premiered in Stuttgart in 1912 without great success. In 1911, Hofmannsthal had adapted Le Bourgeois Gentilhomme for the Deutsches Theaterand proposed to replace the divertissement of the play with a serious work: Ariadne auf Naxos; Richard Strauss composed this opera in addition to the music for Molière’s piece.

[2]Marcelo Lombardero is an opera singer and director. He has worked in theatres around Europe and America, receiving awards in Poland, Chile, Mexico and Argentina. He was artistic director of Teatro Colon and Teatro Argentino  de la Plata.

[3]Punta del Este, usually referred to as “the Monaco of the South,” is a city and resort on the Atlantic Coast, in the Maldonado Department of southeastern Uruguay.

*Halima Tahan (PhD) is a writer, critic and editor. At present, she is director in Ediciones Artes del Sur and a member of the Instituto de Artes del Espectáculo, Facultad de Filosofía/Universidad de Buenos Aires. In Córdoba city, Argentina, where she graduated from the National University, she worked as a professor at the National University of Córdoba´s Art School. She was curator of the program “Rituals of Passage” in the San Martin Theatre, Ministerio de Cultura de la Ciudad Buenos Aires. Her articles have been published in numerous books and magazines in her country and abroad. She has participated in juries of national and foreign theatrical awards and is a member of the editorial board of Critical Stages (AICT/UNESCO). 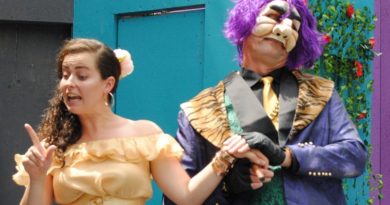 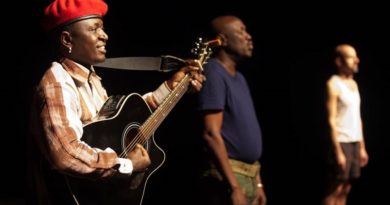