Gianina Carbunariu is widely considered the enfant terrible of Romanian contemporary drama. She started her theatre studies in 1999 when she was accepted as a directing student at the “I.L.Caragiale” National University of Theater and Film Arts in Bucharest. Three years into her studies, something started to change in the Romanian contemporary drama environment. Together with three fellow students, Carbunariu co-founded a new drama competition that soon became a very interesting platform for new playwrights. This group, called DramAcum, gave a fresh new face to Romanian theatre, the strongest since the fall of communism. Not only did DramAcum encourage new dramas, it also resulted in new translations of works were written in less widely circulated European languages.

Carbunariu’s first play, Stop the Tempo is her most internationally known work and was later considered by critics as “the scream of the new playwrights’ generation.” In 2004 the play was invited to the Wiesbaden (Germany) Biennale on New Plays from Europe. Since then, it has been performed on stages in Paris, Berlin, Dublin, New York, Istanbul, Vienna, Nice and Leipzig. Her second play, Kebab, which she has started while in residence as international playwright at Royal Court Theatre in London, was banned by a private theatre in Bucharest only days before the premiere, due to “indecent language.” After it was rescued by Teatrul Foarte Mic Theater in Bucharest (a group that also encouraged Carbunariu’s career as a theater director), Kebab later become one of the most frequently toured productions abroad; it caught the attention of theatres around the world, from Japan to the U.K. and from Denmark to Greece.
For the last two years, Carbunariu’s name has been consistently proposed by the Romanian theatre critics for the Europe Prize for New Theatrical Realities. Barely 33 years of age, she has been short-listed by the Romanian media as one of the 100 most influential women of today’s Romanian society.

That’s exactly the question we’ve been asking ourselves when dramAcum project was initiated in 2002. DramAcum is a program focused on new original playwriting. We were a group of directing department students, with the Theater Faculty of the National University of Theater and Cinematographic Arts in Bucharest. We were thinking then that there were major issues in the Romanian society that had not been addressed on staged. Still are! The reason why these issues were not an inspiration source for new drama had to do, I think, with the common idea that, in Romania, theatre is not the right place for such problems to be debated on.

We took the opposite opinion. We felt that the stage is exactly the right place for such discussions, the right place for artists and audience to meet and reflect on what’s going on around them. After 8 years now, I think that the younger generation of Romanian playwrights and directors are more interested in seeing deeper and in addressing onstage major issues which they face in their every day lives. But there are still themes that are taboos. It’s not about direct political censorship anymore, but about our ignorance and indifference that fail us in recognizing a problem that should be staged for a public, accurate and honest discussion.
DramAcum’s next project is a documentary research for a performance on the situation of Rosia Montana, an area in Transylvania’s mountains, which will soon become the biggest gold mine exploitation in Europe. The bill for this is the irreversible change in lifestyle of inhabitants around that area and, of course, the dramatically environmental changes on long run. The opinions of people living there are very different, and that’s why we think this is an issue that theatre has to address publicly.

2. What, if anything, is difficult for you in communicating with the director? Why? How early and how often do you exchange views about the coming production? Have you directed yourself, and, if so, does that make communication easier?

Usually, I direct my own scenarios and so I feel I experience a lot of freedom in my creative work. I do not have to be faithful to a text but to the performance and themes I chose. Text is just a part of the process, and it can change a lot during the rehearsals with the actors, set designer, choreographers, musician and other theater professionals. An important time of the work process is dedicated to research and documentation through interviews. I find this important for me both as a director and playwright, so I can get different perspectives on the themes that interest me.

Working as an independent artist, a significant time dedicated to a new project has to do with the administrative machine: organizing, fund raising, writing applications, promoting and other ordeals. This can be difficult at times and it consume significant time that I feel I should dedicate only to the creative process, therefore I enjoy it less. But I guess this is what it really means to be truly independent. During the creative process, the most difficult part is when rehearsals are coming to an end. I insist on developing my work even after the opening night and I come with new tasks for the actors. I’m also opened to actors’ suggestions, because I really believe that a performance should be alive and my work doesn’t end after the first audience meeting. As a director, or even as a playwright, I have to fight with the actors’ need to fix everything and also with my own need to move on to another project. But I think a performance is a place where people meet and the meeting should be different each time, because we change a bit every day.

I still believe that my university directing classes professors are the most accurate critics I’ve ever had. I also have very good critics among my colleague directors from dramAcum with whom I discuss my work and their work in a very honest and opened way. I remember what our professors had told us, in the first year of university studies: we were there to take risks and do as many mistakes as we could. I tried to think about their advice when I had finished my studies and started my work outside the relatively safe environment that the theatre faculty in Bucharest has offered me. 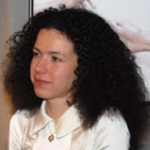 [1] Ioana Moldovan, 33, has been a member of the Romanian section of the International Association of Theater Critics since March 2007. She started to publish theatre reviews in 2005 and is presently a regular theatre critic for Revista 22, a weekly magazine (www.revista22.ro). Since October 2008 she has been awarded a PhD Fellowship with the “I.L.Caragiale” National University of Theatre and Cinematographic Arts in Bucharest, with her research topic focusing on the “Open Society Theater”. She is also a researcher for the theater faculty in the same university and is involved in academic work as well. For almost three years (2006-2009), she was involved with ACT Theater in Bucharest, the first independent theatre stage in Romania, where she served as a cultural manager, discovered young actors and worked on productions that earned ACT Theater three UNITER National Theater Prize nominations.