In 2000―during the First Meeting of Performance and Politics of Americas, which I had the opportunity of organising at the University of Rio de Janeiro (UNIRIO), together with the Hemispheric Institute of Performance and Politics of the New York University―I had the chance to meet Augusto Boal in person. I had known his work ever since the Sixties, when he was for all of us, as theatre people, a great exemplar of political theatre with his Arena Theatre (Teatro de Arena) of São Paulo and Opinion Theatre (Teatro Opinião) of Rio de Janeiro.

In the Eighties, I had the chance to work with some of the techniques of the Theatre of the Oppressed (Teatro do Oprimido) in my work with community theatre.[2] I had followed his career, without coming too near his aesthetics and his perspective on theatre. But in 2000 Boal seemed to me a different person, far from the one I had imagined, although combative and strong in his speech, but no longer seeing theatre only as a weapon. His thought had changed, and his Theatre of the Oppressed seemed no longer a straight-jacket, rather something he would come to define as “Aesthetics of the Oppressed”: ways of thinking and feeling. He was calm, clear, and precise in his words, a pacifist, but still a fighter and with his critical sense more and more accurate.

He was a Brazilian theatre practitioner, whose work had been recognised by the great names of 20thcentury theatre; although in Brazil, paradoxically, he was never accepted as a great theoretician or scholar. In 2004 I invited him to give a lecture at UNIRIO and he was moved by this invitation. What he said there was transcribed and then rewritten by him and later published as Theatre and Dance as a Communitarian Experience.[3] In December 2008 I arranged a meeting with Amir Haddad, a fellow director. By then I was already taking care of bringing his archive to UNIRIO, which I thought of opening this year [2010] with his presence.

Boal left us materials―which are now in the Library of UNIRIO―brought recently from his former residence in Ipanema. They were all piled up, some of them even still in boxes! We immersed ourselves in the fabulous past of this Brazilian, the most important one on the world scene. Activist, politician, author, actor, director, poet, Boal leaves an incredible legacy of a man deeply committed to art and the social changes of his time.

I found a play, written and published in March 1968, in a small note book published by TUSP: The Very Small Moon and the Long Journey.[4] In it Boal meditates on the delicate moment of Che Guevara’s death in Bolivia. He does not use the words “Che” or “Guevara,” perhaps to avoid writing the biography of a man. He just uses the term “combatant,” thus making him more representative of a position. It could also serve to cheat censorship, but the publication leaves no doubt about who is the character portrayed by inserting the traditional photo of the dead Che surrounded by military figures and curious people. Boal seems to understand that a cycle is closing down there―a change that would bring about the problem of armed struggle as a way to achieve power. At that time he seemed to support an effective resistance to dictatorship through force. Because of his struggle and the use of his art as a weapon, Boal came to be tortured, persecuted and exiled during a long period of his life; which no doubt contributed to the internationalization of his struggle. According to his assessment, he came to feel forever exiled.

In his The Very Small Moon and the Long Journey Boal meditates on the death of someone who has been a hero for many of us Latin Americans, including we leftwing Brazilians, who had been living under dictatorship since 1964. Before that time, we had a period with progressive governments, under Juscelino Kubischeck and João Goulart, who had allowed a great advancement in literature and art (bossa nova in the music, and the new cinema), as well as in industry: they were indeed real conquests for the Brazilian people. The action of the short play takes place in Bolivia, where the two military figures, who had arrested and tortured Che to death, open up a press conference. Boal gives details about the press manipulation that is so typical of rightwing authoritarian regimes in Latin America, and little by little, in a flashback he reveals a Che who is a dreamer, but quite aware of his struggle. Little by little theatre is restoring the truth of the facts that had been hidden by power. I transcribe the prologue of the play The Small Moon and the Long Journey described as “Augusto Boal’s collage”:

CORINGA – I must begin by saying that we came to the conclusion that the death of the combatant is painfully certain. His death has already been announced several times, but we never believed in that and we never came to worry. This time too, in the beginning, we did not worry, even when the first photos began coming out. For sure they were photos of someone who resembled him very much. The first one showed the combatant in the jungle, a dark photo. Few got worried. The second one showed his whole body, but it was a newspaper photo where his physical features were barely discernable. The third one showed his face. Many of us began thinking that it might be him. For the first time we were sure that the combatant had been killed. After that, the news coming was contradictory: a scar on the combatant’s hand. Then tissue from the lungs, fingerprints, everything, everything could have been forged, everything could be a lie. Except for the last evidence: his diary and, in it, his thought. A photograph can be retouched: even the face of a man can be disfigured; however, his style cannot be imitated. The news of his death is painfully certain.[5]

When I received the news of Boal’s death I also could not believe, even if I knew that he was sick, for he seemed so strong and so determined to live. He had come back so happy from his participation in Paris where he had read his text on the Theatre World Day and had been appointed as Theatre Ambassador by UNESCO. As an example of his devotion to the struggle for social change, Boal leaves his last text, where he announces, in the first paragraph, his idea of theatre that comes very near his friend Richard Schechner, the great theoretician of performance studies.[6] Boal defines his theatre this way:

Even if one is unaware of it, human relationships are structured in a theatrical way. The use of space, body language, choice of words and voice modulation, the confrontation of ideas and passions, everything that we demonstrate on the stage, we live in our lives. We aretheatre![7]

In his struggle Boal places the audience as the great social actor, the one who has the free will to choose his own destiny, be it in Brazil, Korea, India or Canada. His theatre belongs to the one who is committed to the change which is so needed in our world. As he writes in his last article:

Twenty years ago, I staged Racine’s Phèdre in Rio de Janeiro. The stage setting was poor: cow skins on the ground, bamboos around. Before each presentation, I used to say to my actors: “The fiction we created day by day is over. When you cross those bamboos, none of you will have the right to lie. Theatre is the Hidden Truth.”

When we look beyond appearances, we see oppressors and oppressed people, in all societies, ethnic groups, genders, social classes and casts; we see an unfair and cruel world. We have to create another world because we know it is possible. But it is up to us to build this other world with our hands and by acting on the stage and in our own life.

Participate in the “spectacle” which is about to begin and once you are back home, with your friends act your own plays and look at what you were never able to see: that which is obvious. Theatre is not just an event; it is a way of life!

We are all actors: being a citizen is not living in society, it is changing it.”[8]

I used this text in the opening of the performance News About Past Things (Noticias de las cosas pasadas), created with students of the University José Caldas, of Bogota. Boal came to be a character, reporting on his works from the 1960s and 1970s, the period in which his work brought Brazilian aesthetics near the ones used in the rest of the Latin American continent. He himself was running away from military dictatorship and was seeking refuge in various Latin American countries, where he wrote and produced plays in Spanish before he could reach refuge in Portugal and France. And working for the first time with his textsArena Conta Zumbi, Torquemada and The Very Small Moon and the Long Journey (A Lua muita pequena e a longa caminhada) I realized the universal appeal of his theatre. In the performance that I directed, the most polemical play was the one on the death of Che. People could think that I was defending Che’s armed struggle in a period when in Colombia there is a strong guerrilla movement (The FARC – Revolutionary Armed Forces of Colombia). Would I be directing Boal’s play as a lamentation of Che’s loss or as a way to profess an armed struggle? I found an interview with Boal, given 30 years after he wrote the play, in which he approached Che’s syndrome. I did not hesitate in inserting Boal’s comments on Che’s actions. The interview could leave no doubt about the change that had come about in his thought. Furthermore, Che’s myth had already been so strongly rendered banal as a commodity by the media, that his model was no longer useful for political and cultural changes. Boal commented on Che’s syndrome this way:

Yes. Che Guevara sees that there is a problem in Africa, he knows what to do and goes there to solve the problem. He was not given any attention. He goes to Mexico and there he meets Fidel. Well, there is a problem in Cuba … and he goes there. It worked well, but he goes on…There is a problem in Bolivia, he knows what to do, goes there and explains to the Bolivians, and he is killed. The Che Guevara syndrome is for me “what” happens when someone has the discernment to know that what he thinks is right. But he should not be the only one to think that. Those who are interested in that should think the same too. Don’t you think so?[9] 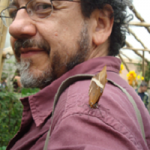 Boal and Che: Side by Side on Stage