Theodoros Terzopoulos, the founder of Attis Theatre Group (1985 at Delphi), is a globally acclaimed Greek theatre director, a cosmopolitan artist in an emerging world of multinational fora and, at the same time, invisible authoritarian rule. His theatre, whether it has to do with the Greek classics, Heiner Müller or Bertolt Brecht, is the outcome of an exilic consciousness shaped by the historical trajectory of twentieth-century Europe, an attempt at representing collective trauma, loss, memory and forgetting.

In the twenty-first century, and with performances like Antigone in Philadelphia, Bacchae in Taipei, Agamemnon in Beijing, Bacchae in Moscow and Endgame in St Petersburg, Terzopoulos seems to consistently negotiate Samuel Huntington’s famous prediction that “The fault lines between civilizations will be the battle lines of the future.”

I met Terzopoulos a day after the opening of Documenta 14 in Athens. He had attended Henryk Górecki’s Symphony of Sorrowful Song, conducted by The Athens State Orchestra and the Philharmonic Orchestra of Expatriates from Syria. He spoke to me enthusiastically about the importance of showing the artworks of poor countries, ruined by neoliberalism and a power system that sees the world and its peoples only in quantitative terms.

In The Return of Dionysus—the book in which you describe your acting method (2015)—quotes by Heraclitus, the Greek philosopher of Universal Flux and the Unity of Opposites, are recurrent. As a theatre director who started in the 1970s and continues well into the twenty-first cetury, how have you coped with the constantly changing world?

The world changes with us and, when we keep our eyes open, our senses keen and, above all, our curiosity intense, we can really be running along with time, be an inseparable part of time, rather than an oppositional force to time. The artist exists and operates within time; he lives, senses, suffers, reacts. He lives in the flow of time, as Heraclitus has put it. He lives in nature, in love, in chaos, in doubt; in negation and self-negation.

You started by studying Brecht’s method at the Berliner Ensemble, but your youth was more marked by the “parricide”—as he liked to call himself—Heiner Müller.  Who did you “kill” as an artist?

Such decisions are not self-conscious. The artist assimilates the principles of his master/father and, then, goes on to become a father himself. For me, Heiner Müller’s phrase is dramatic—a derivative of ancient Greek tragedy. I like to believe that it is a matter of flow; we are part of a natural flow, caught in a net of betrayal that is the net of progress. This is natural progress which assimilates some principles while suppressing others. Müller may have killed Brecht, but I did not kill Müller, because every murder is a sort of suicide. Medea, for example, killed her children and she thus killed herself. I act on the edge of danger, until the end.

You introduced yourself to both the Greeks and the foreigners primarily as a groundbreaking director of ancient Greek tragedy. In the twenty-first century, what is tragedy for you?

I introduced myself with tragedy but I did not try to modernize it. I did in-depth research into the genre and reached the ontological; it is there that I found the innate political dimension. Depth unites centuries and peoples as well.

What about Brecht today? You have just directed Mother Courage at the Alexandrinsky Theatre in St Petersburg?

The same holds for Ibsen, Strindberg—I directed Mademoiselle Julie in 2008—and for all great playwrights. I search for the big idea, the ontological one, that which is bigger than common life. In that sense, Brecht interests me a lot, but I ingrain him in tragedy. He himself said that Mother Courage is tragic. Although the character of Anne Fierling is naturalistically portrayed, the structure of this play is the structure of tragedy. I gave the metaphysical dimension of war, of commerce and religion; metaphysics as an alibi.

In your opinion, what is theatre’s role in life? Do you think it readily responds to our modern fears?

Art reconciles us with death. The word “death” was so often used by the ancient Greeks that it became part of life, something common. Art reconciles us with death and, in this way, we come to love life more. Life in its truest sense: as being with the others and for the others. So, it is the fear of death, rather than loss or fear more generally, that makes us all create art.

Theatre has great power, and that power has to do with the body: the breath of a living organism on stage unites with that of the spectator, and the spectator looks for this live relationship. Theatre functions more holistically, it stimulates and provokes much more.

Is there something that worries you in art and/or politics today?

I am constantly worried, but this is not a burden. I observe the bankrupt experiment of globalization, the bankrupt experiment of globalized postmodernism, which, alongside commerce, was imposed on countries with diverse traditions. For a while, this helped festivals and the box office, but, now, art and theatre and the very people are in crisis. The latter’s only relation is with the intermediary; the computer screen, the image, the spectacle. Technology weakens our sensory perception and we do not feel, mourn, fear. This worries me and this is reflected in my art.

There are performances which tell the spectators “I am like you,” whereas others tell them “I am (an)other.” In the end, can a director shape the taste of the spectators?

“I am like you” is the main concept of commercial art, of the box office, an extension of TV series aesthetics. It is convenient for both the box office and the recipient who does not clash with one’s own self. It is entertaining, but not educational. “I am (an)other” implies that I recognize my other self and the other, the stranger. This is a difficult process that requires education and sensitivity. It is also demanding for the artist, too. Still, whenever it happens, it is liberating and, therefore, entertaining. You recognize the other—who may equally be your reflection in the glass and you may even smash this glass.  But, all these have to do with aesthetics. In aesthetics all are vindicated, even the political intention. I am in favour of this.

Those who call us corrupted and arbitrarily refer to the whole Greek people as such are those who are well into the grinding machine of neoliberalism. All these have no interest in art. Yet, those few who love art, who love classical Greece and modern Greece (including its mistakes) give more considerate answers. But, as I said before, they are the minority. Populism reigns in the world today.

Every poor country is defeated. There are many countries which, for centuries now, have not managed to stand on their own feet economically. They have, however, a rich cultural background, a deep memory. The art of the defeated countries, the great art of the defeated, is more important than that of the victors. I try to be on this side. I do not believe in the cultural imperialism of the wealthy, industrial countries. I can start a dialogue with them, but cannot be part of this scheme, because it does not create memory, it only serves the ephemeral.

Umberto Eco argues that “culture is crisis” and sees crisis as the necessary precondition for cultural development. Do you share his optimism?

Crisis is constant and for me it is implicit in art. Art studies everyday life in crisis so as to rise above it. Crisis is the foundation of art. All these years of neoliberalism and commercialization have been years of concealment. It is at this point that our clash is necessary. This conflict can take us somewhere else.

In the United States, Donald Trump’s election as president forced the artistic star system to awaken and assume a decisive role—I am referring to the cases of Meryl Streep, Christo, etc. The artists are called upon to leave their cocoon of self-reference. How do you personally handle this responsibility today?

Trump represents a specific kind of politics. He is a specific, visible sign that one can protest and fight against. Still, artists must be alert and react without a visible culprit for there has always been one through the ages. I see what is currently taking place in the United States as a manifestation of pop art and populism.

Thank you Mr. Terzopoulos. Good luck with your future projects. 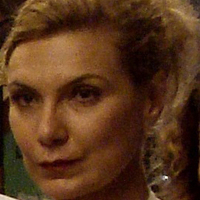 *Penelope Chatzidimitriou (MA in Theatre Studies, Royal Holloway; PhD English Department, Aristotle University of Thessaloniki) is known for her doctoral thesis on the opus of the Greek director Theodoros Terzopoulos, and her interest in modern directors, Greek tragedy restagings, performance and performance art. Recently, she has focused on the literary and stage representation of cultural trauma and the bodiless head. In 2010, she published, in Greek, her book Theodoros Terzopoulos: From the Personal to the Universal. She has been published in numerous editions of various publishers, including: Bloomsbury Methuen Drama, China Theatre Press, Cambridge Scholars Publishing, Peter Lang and Theater der Zeit.

Tagged on: by Penelope Chatzidimitriou

One thought on “The Artist in Times of Crisis: Interview with Theodoros Terzopoulos”