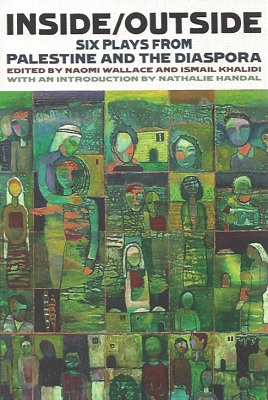 “Plays written by Palestinians have an uphill battle in order to see the light of the stage. Palestinian dramatists do not so much write against the grain, though many do, but write against the odds” (xi),” according to Ismail Khalidi and Naomi Wallace, in their preface to this important new anthology of Palestinian plays, Inside/Outside: Six Plays from Palestine and the Diaspora.

The editors, who are diaspora playwrights themselves, have selected plays that were either written in English or translated into English, the only information the editors provide about their criteria for choice. Unfortunately, this leaves the reader somewhat frustrated, not knowing what the critical response and reception to these plays really was.

Happily, the book does contain a twenty-five-page Introduction by poet, playwright and noted Palestinian scholar Nathalie Handal, essentially a brief history of Palestinian theatre, starting from the Ottoman Empire and British colonial rule (1917-47) to the present, covering the theatrical movements, transformations and themes, including the post-1948 Nakba[1] period, the post-1967 war through the first Intifada, the post-Oslo period through the second Intifada (2005) and the main theatrical approaches in the first decade of twenty-first century.

The introduction also maps out the major contributions of such cultural entities as the Palestinian Theatre League (established 1989), the Palestinian Festival of Literature (PalFest) and the Palestinian National Theatre. Also noted are several of the most daunting challenges that Palestinian theatre practitioners routinely face in trying to get their works staged: “compulsory permits, actors and writers imprisoned or detained, bulldozed theatres and lack of funds” (xxvii).

Handal also casts a critical look at Israeli censorship and related interventions in the creative and staging process of Palestinian theatre-making, concluding her insightful piece by speaking about some recent intercultural collaborations done by Palestinians living in the diaspora.

Each of the plays is prefaced by an enlightening Author Statement and concludes with a brief biography of the playwright. The biographies certainly show the diversity of places that these artists come from, where they received their educations and where they are living presently (these range from North America and Europe, mostly Germany and France) to the Middle East (Lebanon, a refugee camp in Bethlehem) and South America (Chile). The diversity is itself strong testimony to the nature of Palestinian displacement.

The first play, Tennis in Nablus (subtitled “a tragicomedy in two acts”) by Ismail Khalidi is a realistic, absurdist account of the Arab Revolt (1936-39) told through a Palestinian lens. Setting his play at the eve of World War Two in Nablus, Khalidi brings together Palestinian writers and revolutionaries with Irish, British and Indian military figures to present an historical portrayal of the British political intervention of the period and Palestine’s failure to regain independence and autonomy. The play is a strong commentary on Palestinian history and how it has been overwhelmed by both Zionist mythology and British imperialism.

Keffiyeh/Made in China by Dalia Taha is a combination of eight vignettes presenting the fragile, vulnerable lives of parents, sisters, prisoners and soldiers under occupation. Taha posits that “Theatre is a celebration of fragility, transience, imperfection, collapse, precariousness, unreliability and collision” (69) and her dramatic episodes are lucid manifestations of this vision. The vignette “Craving Mangoes” depicts a father and a mother having to identify their son’s body. “60 Seconds” is the story of the last minute of a man’s life. In the title vignette, “Keffiyeh/Made in China,” a Belgian girl sets out to buy a Keffiyeh but finds herself trapped in a taunting conversation with a salesman who tries to convince her to buy a blue bra instead. The play’s fast-paced, brisk dialogue presents a real collage of not only ironic situations but also existential questions.

Plan D by the Palestinian-Irish dramatist Hannah Khalil is a timeless drama of a fictional family facing the dilemma of staying in or leaving their homeland. The play’s five parts portray tragically the inevitable destruction of a family whose bitter optimism lasts to the very end despite all constraints. An opening note informs us that its plot has been inspired by the Palestinians experience of Nakba. Thus, despite the playwright’s attempt to universalize her play’s cosmos and characters, the spatio-temporal specificity of the plot is not far-fetched, particularly to those who know that Plan D itself refers to an Israeli military operation intended to expel Palestinians.

The fourth play, Handala, is based on the legendary cartoon series of the same name by the famous Palestinian cartoonist Naji Al-Ali. Abdelfattah Abusrour’s fascination with the concept and practice of “beautiful resistance” led him to create this dramatic adaptation that in Handal’s voice “unfolds at various levels, poetically and lyrically, wittily and humourously” (xxx). The quotidian political struggles of the play’s characters revolve around the central figure of Handala, a ten-year-old boy, frozen in time and history, who is never seen frontally because he can only face the audience when he can return to Palestine. Other symbolic characters include Hamdoul, representing numerous Arab leaders as well as the Palestinian leadership, and a radio whose pivotal presence to the resistance is poignantly dramatized throughout the sixteen scenes of the play.

Territories, by Betty Shamieh, dramatizes the theme of land and woman as perpetual subjects of violation and possession. Here, we meet a Muslim woman captured during the Crusades. Alia, introduced as the sister of Saladin, the ruler of Damascus, moves between the two settings of the play. Territories is a strong feminist historiographical intervention about the unrecorded role of women who have also shaped the history and identity of the Arab world.

The last play is 603 by Imad Farajin (translated by Hassan Abdulrazzak). It is a captivating dramatization of Israeli imprisonment. Four characters—Mosquito, Boxman, Slap, and Snake—take turns revealing their personal histories, fears, fantasies, hopes and, above all, their visions of resistance. By putting the Israeli justice system into perspective, 603 poses important questions about freedom, survival, and human relations.

It should be noted that all of these plays have been independently published, and all have premiered in theatre venues in the US and Europe, and have even toured throughout Palestinian cities. What makes the collection unique is the inclusion of voices of female playwrights (three out of the six), all of whom belong to a new generation of Palestinian theatre practitioners who, as the editors put it, “insist that Palestinians do not need permission to narrate their own stories, their own histories, and their own visions of the future” (xi).

One further note: the Palestinian dramatic repertoire and theatrical tradition, as Handal also points out, suffers badly from being “undocumented” (xvii). This, it might be added, is a genuine scholarly injustice afflicting all Middle Eastern theatre studies.

As the three-page “Further Reading” section which closes the volume clearly shows, there have been few books published about Palestinian drama and theatre. This said, three other books—Palestinians and Israelis in the Theatre edited by Dan Urian, in 1995, Palestinian Theatre by Reuven Snir, in 2005, and the very recently published Double Exposure: Plays of the Jewish and Palestinian Diasporas edited by Stephen Orlov and Samah Sabawi, printed by Playwrights Canada Press, in 2016—have also contributed significantly to overall knowledge in the field.

Inside/Outside: Six Plays from Palestine and the Diaspora is actually the second collection of Palestinian plays to be recently published. The first, Sykes-Picot: The Legacy (Five Modern Plays by Hannah Khalil, Hassan Abdulrazzak, and Joshua Hinds), edited by Kenneth Pickering, features plays that seem to have a more direct and simpler language and characterization. This new volume from the US-based Theatre Communications Group really is a major contribution to the field, one that offers access to some important recent work by Palestinian theatre artists. Anyone looking into this volume will surely be surprised by the beauty, humor, vitality and vastness of the themes and aesthetics of these plays.

Playwright Dalia Taha says in this volume, “I believe in theatre because it doesn’t make us happy.” (69). The publication of Inside/Outside: Six Plays from Palestine and the Diaspora might just make her change her mind. It will certainly make many who are interested in this field—and many who are just discovering it— extremely happy.

[1] Nakba literally means catastrophe and refers to 1948 during which some 750,000 Palestinians were displaced and many Palestinian artistic and social communities torn apart. 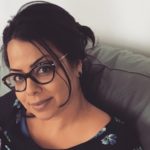 *Marjan Moosavi is an Iranian-born theatre scholar currently completing her PhD at the University of Toronto’s Centre for Drama, Theatre and Performance Studies. Her professional work is rounded out with dramaturgy, dramatic translation and teaching Middle Eastern Theatre. She is the Regional Managing Editor of Iran for TheTheatreTime.com. Her work has previously appeared in TDR and Critical Stages.

Inside/Outside: Six Plays from Palestine and the Diaspora