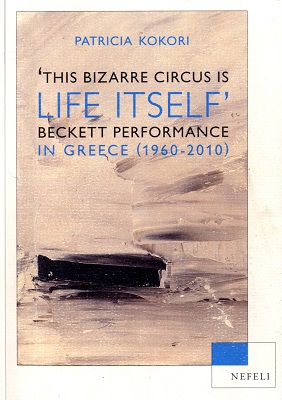 Yet another volume on Beckett, this one professing to respond to the apparently ever-relevant “aesthetic radicalism” of the great Irish dramatist and to the demand for “the invention of new critical positions” that this radicalism has created on the international scene generally and Greece specifically. In the Introduction, scholar Patricia Kokori lays out her intention to look at why Beckett’s post-war dramas—Waiting for Godot, Endgame, and Happy Days—“have not lost their call to interrogate the subject’s relations to self, other and the world” (12); an ambition that the book, unfortunately, falls short of fulfilling because its objective is so broad that it compromises the endeavor as a whole.

Indeed, Kokori aspires to contextualize the entire international reception of Beckett while making up for the lack of scholarly attention to “Greek production history and critical reception” of his work, by examining, among other things, “how the duality of the virtual and the actual in Beckett’s plays has been perceived in the particular Greek cultural context.” To do that, she situates Greek Beckett performances within the international performance history, and even seeks to show “how relevant the plays are for audiences of nations with turbulent history” (12-13).

Perhaps it is for the best that this last point is barely touched upon in the course of the study as it would only compound the confusion of intermingling readings and perspectives on various issues, from Theodor Adorno’s position on the social/political function of Beckett’s “protest”—or “oppositional”—art (15), to liberal humanist, existentialist-inflected, phenomenological, and deconstructionist interpretative attempts on Beckett’s works.

The volume is divided in two parts. Part One, “Challenges and Allures of Beckett’s Drama,” deals with the development of Beckett’s “aesthetic thinking,” to use Kokori’s phrasing (67), as it intersects with key points in the history of modernism, with major critical frameworks that have shaped the reception of Beckett’s work, and with detailed discussions of the three play-texts. Part Two, “Performance Approaches to Beckett in Greece,” traces chronologically the production history and critical reception of these three plays in two specific periods, 1960-1980 and 1980-2010. Suffice it to say here, Kokori’s account of Greek reception, ultimately, plays a secondary role in the study.

Chapter One contextualizes the “genesis” and evolution of the Beckettian “presentational art form” (42) by means of a blend of biographical facts, early artistic views and interests,  intellectual influences (from the Pre-Socratic philosophers to modern philosophers, modernist icons such as Joyce, Bergson and Artaud, and psychoanalytic theory and practice), and suggestions as to Beckett’s and his works’ political inclinations. The latter point is taken up in more detail in the second chapter where Kokori discusses Adorno’s “critique perspective” of Beckett’s negative aesthetic (14) and offers a brief overview of critical approaches to his “radical poetics,” which is also an account of how this contesting “interpretative pluralism” functions in the Beckett construct.

The treatment of a number of issues, concepts and themes, recurrent in Beckett’s work (and its reception), in these chapters, could perhaps be useful for “students and general readers with little knowledge of Beckett” (31)—the book’s designated target readership. But even these readers must read past—and not trouble themselves with—the quite puzzling usage of specific terms such as “material,” “concrete” and “concretisation,” “negative,” “positive” and “positivist,” in several different senses (and without relevant clarification), throughout the chapters. Furthermore, although Kokori obviously favors Adorno’s approach to the political potential of Beckett’s plays and dwells on it in many instances, she frequently reiterates the point of his work’s constitutive political ambiguity; this ultimately obscures her own thesis and thus detracts from the cohesiveness of the book as a whole.

The last chapters address the different ways Greek directors and critics have responded to the challenges for what she calls “inhabitual perception” set by Beckett’s plays. Here, as in many other instances throughout the book, readers are invited to employ their imaginative skills in dealing with Kokori’s use of jargon in discussing these plays. The author attempts to assess the “critical vigour,” “subversive quality” and “critique potential” of Beckett’s work in Greece mainly by way of Greek theatre criticism (indeed, Chapter Seven could be subtitled “Kostas Georgousopoulos’ View on the Matter”), especially insofar as post-modernist experimentation bears on treatments of the plays, an element which risks commodifying Beckett’s work. Her final conclusion is that the “figures and situations” of Beckett’s theatre work are inherently resistant “to preferred modes of viewing and genre narratives,” a quality that “prevent[s] their transformation into a consumer commodity” (265). My own view is that this conclusion needs to be qualified significantly if it is to be taken seriously.

In the end, I would not recommend the book to undergraduate students—I think it would be more confusing than helpful to them. But for readers with knowledge of Beckett who are interested in his work’s international reception, it could be of some use in enabling comparisons between Beckett’s own directorial and critical approaches, revised over the years by the artist himself, and what audiences actually receive.

And one final comment: the volume is in serious need of editorial correction throughout, something that is probably less the author’s fault than that of the publishing house. Whoever’s fault, it should be seen to as quickly as possible. 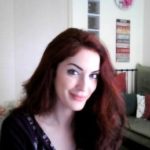 *Katerina Delikonstantinidou is a PhD Candidate in the School of English, Aristotle University of Thessaloniki. Her articles have been published in numerous volumes and journals, and her research work has been presented at national and international conferences. She has been a member of the web team for Critical Stages since 2014. Her research areas include Theatre and Performing Arts, Ancient myth, Greek Tragedy and Ethnic Studies.

This Bizarre Circus Is Life Itself: Beckett Performance in Greece (1960-2010)