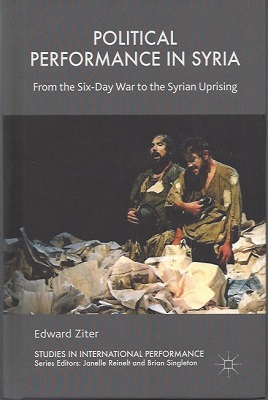 Edward Ziter’s Political Performance in Syria is a major contribution to scholarship on political theatre in a specifically Muslim Middle Eastern context. It delivers many fresh perspectives on the way Syrian artists, particularly, express creative resistance in their own socio-political context, and how this creative work leads to, then, questioning and destabilizing established forms of power in the region. The book’s historical focus encompasses the post-1960s period up to the Syrian Uprising of 2011. Ziter, a professor at NYU, particularly examines the artistic responses that Syrian theatre has presented in its inevitable encounters with states of exception, such as the six-day war, or in the course of more recent uprisings.

The book is organized into six sections (including an introduction) based on what, for Professor Ziter, are recurring concepts in his Syrian explorations: martyrdom, war, Palestine and Palestinians, history, heritage and torture. Such categorization offers a very helpful overview of artistic intervention in its most critical context. That said, the structure of each chapter could have also benefitted from subheadings to present the reader—most of whom will be unfamiliar with the context—a better journey through the path of each of these necessarily complicated discussions.

The chapters explore an array of performances, from theatre, film and television, to ceremonies showing clear examples of performance activism. Each displays an awareness of both the theatrical culture involved and the material conditions of production in Syria over the last 50 years. Ziter’s first-hand observations of Syrian theatre consistently maintain a tone that is not only inquisitive but also hopeful. The depth of political background and the breadth of his historical accounts are often striking and clearly demonstrate his expertise and knowledge.

What, perhaps, distinguishes this volume most is its broad genealogical as well as aesthetic approach to the practice of political sensibility and commitment in the works of contemporary Syrian theatre practitioners, including Saadallah Wannus, Naila al-Atrash and Muhammad al-Maghut.

Running alongside the aesthetic focus of such political performances are critical inquiries into the way the themes can be analyzed and interpreted. Ziter draws on various theories, including Agamben’s “state of exception,” Kristeva’s notion of abjection, Fanon’s idea of the colonized self, Spivak’s subaltern’s voice and Scarry’s role of pain and torture in “unmaking identity.” While incorporation of such lines of enquiry certainly adds layers of meaning to this examination, ultimately, it does not help in offering up a unified model of analysis in the Syrian context.

One unifying thread which does emerge in his discussion is the way political theatre interrogates the dynamics of state power and its relation to Syrian national identity. Ziter has selected plays and performances (five to six per chapter) that create a useful ground for problematizing discourses around national identity specifically in relation to concepts of martyrdom and heritage, trauma, defeat, ongoing Israeli-Palestinian conflicts and the torture of political prisoners.

The most effective of all these artistic interventions, according to Ziter, challenge the “abstract,” glorified concepts of martyrdom, war and national heritage; ideas that were long supported by the Baath ideology. This political theatre offers alternatives by re-imagining versions of such concepts through lampoon, desacralization and intellectual challenge. In his chapter on martyrdom, for example, Ziter presents several narratives that move toward national liberation, Islam and/or secular freedom (37). In the interventionist theatrical narrative, martyrdom loses its sacred meaning and is presented as simply an ideological apparatus at the service of the state to promote such causes as Arabism and nationalism. Ziter also notes the Syrian tradition of genuine artistic martyrdom in which artists literally sacrifice their lives to achieve artistic agency.

In the chapters on war and Palestinians, Ziter examines both the themes and the aesthetics of challenging official narratives of war and loss. In these interventionist plays and performances, traumas of the wars with Israel and the loss of Syrian land—often presented as the loss of national identity and selfhood—are examined, in order to create “revulsion,” or in Wannus’ terms “agitation,” in Syrian audiences. Ziter notes this is achieved by encountering issues of collective traumatised memory, lost national identity or forgotten heritage, elements that he sees as a precondition for change.

The book also makes a fine contribution to the scholarship on censorship in theatre. Ziter suggests here that artistic censorship by the Syrian state has been arbitrary and attitudinal. Therefore, while conforming to such censorship regulations, artists have had to become “mercurial” and have been required to play with “the shifting limits of the permissible” (10). The need to strategize in theatrical terms to circumvent censorship, to criticize while remaining safe, has been called tannufus (breathing), akin to the western notion of breathing together (literally con-spiracy).

As part of their creative resistance, Syrian artists have developed a real dexterity in devising such strategies and their audiences’ vigilance in understanding both the language and the strategies—developments worthy of attention. Ziter’s observation of this area is clearly oriented toward the intentions of the artist(s) and his discussion suggests that a range of responses and meaning can be elicited from each such event.

In the end, this book is a worthy model for studying political theatre, especially in non-Euro-American contexts. In examining the dramaturgy of political performance in Syria, Ziter spotlights indigenous performance traditions, such as the use of the hakawati (narrator), as well as stylization, physicality, conceit, metaphor, abstraction, self-reflexivity, analogy and fable-like characterizations to name a few.

In his final chapter dealing with torture, Ziter elaborates on the multiple dramaturgical strategies Syrian theatre practitioners have used to mitigate or challenge the power of the state and ways to empower its victims. Particular strategies are identified including the use of music, satire and comic reversals. Through his categorization, Ziter sheds new light on the way dramaturgy and subject matter often work in tandem to destabilize power in the Syrian context.

One must also note here that the amount of scholarship about theatre in the Middle East is ruefully scant. Professor Ziter’s Political Performance in Syria, in this context, becomes even more noteworthy, since it provides a detailed background of Syrian political culture to those unfamiliar with theatre in and of the Middle East. Published as part of the Studies in International Performance series by the International Federation for Theatre Research, one can only hope that such rigorous scholarship will also be created about theatre in other Middle Eastern countries, including Iran and Iraq. 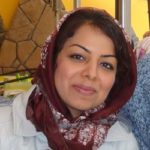 *Marjan Moosavi is a Ph.D. student at the University of Toronto’s Centre for Drama, Theatre and Performance Studies. Her professional work includes dramaturgy, dramatic translation, project-based arts research and teaching. She has published on Iranian dramaturgy and Iranian theatre festivals in the Routledge Companion to Dramaturgy and in TDR. She is Regional Managing Editor for Iran for thetheatretimes.com. Her current studies focus on Iranian theatre interventions in culture and politics.

Political Performance in Syria: From the Six-Day War to the Syrian Uprising